A FALL FROM GRACE

Written and Directed by Tyler Perry

You walk into a McDonald’s because you’re hungry and you don’t feel like going through the trouble of cooking for yourself or going to some high-end restaurant where you have to wait on a table, then wait for your food to be prepared and brought out to you. You want something that tastes good and filling and you want it now. You order your Big Mac, Large Coke and Fries and go to your table. You unwrap your Big Mac, look at it then go back to the counter. You demand to see the manager. And once she shows up and asks you what’s the problem? you shove the Big Mac in her face and complain that this isn’t Filet Mignon.

Now, that’s not fair, is it? You saw those humongous golden arches and saw the Mickey D’s logo slapped all over the building. So presumably you knew exactly what you wanted and what you expected when you walked in the joint and made your order. You can’t blame a Big Mac for not being a Big Mac because that’s all it’s designed to be. A Big Mac. If you wanted something more then you should have gone to another restaurant.

Yes, I know it’s a ham-fisted analogy but that’s the best I got to make this point: there’s a reason Tyler Perry has his name all over his projects. That’s so you know exactly what you’re getting and should have no expectations of anything more. There’s a formula in the method Tyler Perry does his movies and there’s simply no reason to expect him to deviate from a formula that has gained him extraordinary wealth, popularity and success. He has an audience and niche market that he makes product for. They’re happy and he’s happy. 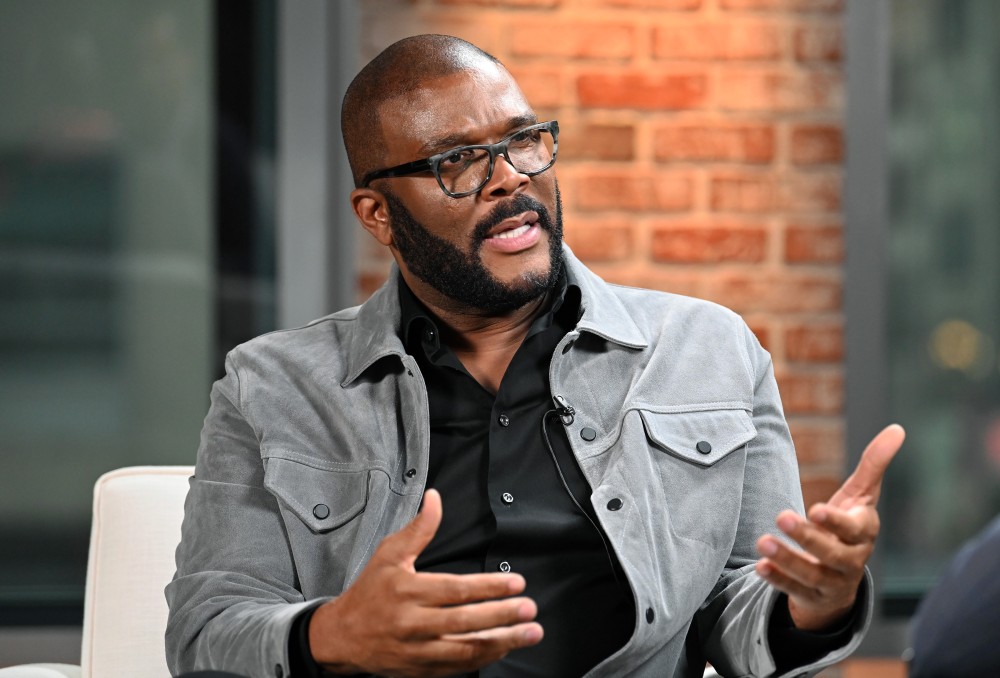 Jasmine Bryant (Bresha Webb) is a defense lawyer in a small Virginia city. While she loves being a lawyer, she lacks what her best friend/fellow lawyer Tilsa (Angela Marie Rigsby) calls ‘The Fire’ and as a result, Jasmine is regulated to only handling plea deal cases. Her boss Rory Garraux (Tyler Perry) hands her what looks to be a no-brainer. Grace Waters (Crystal Fox) is accused of murdering her husband Shannon (Mehcad Brooks) and doesn’t want to go to trial. She wants to cut a deal as fast as possible and simply go to jail. But Jasmine doesn’t like it. The fact that Shannon’s body was never found is only one of the inconsistencies in Grace’s story that doesn’t hold up.

Jasmine manages to gain Grace’s confidence enough that Grace tells her the history of her relationship with Shannon. A relationship that started out like a fairy tale romance, despite Grace’s apprehension about their age difference, she’s caught up in the rush of a new love that rekindles her spirit. Encouraged by her best friend Sarah Miller (Phylicia Rashad) Grace pursues the relationship. A relationship right out of a romance novel or movie. Grace can’t believe how she has been blessed with such a wonderful man who is way too good to be true. And as we all know, if something or someone looks too good to be true, that’s because it usually is. And as Jasmine digs deeper into the nightmare that Grace’s marriage became, she more and more becomes convinced that Grace didn’t murder Shannon. And if Shannon is dead, then where’s his body? And why were both Sarah and Grace’s son Jordan (Matthew Law) at Grace’s house at separate times the night Grace allegedly killed her husband?

There’s a term that was once used quite a lot and really needs to be brought back: Potboiler. Once upon a time it was used to describe any creative work of questionable artistic quality whose sole purpose was to ‘keep the pot boiling’ so that the creator could continue to eat three squares a day and pay his bills. And that is exactly what A FALL FROM GRACE is. A Potboiler. No more and no less and there is simply no use in railing against it for not being any more than what it’s supposed to be. It’s like getting mad at a fork because it’s not anything more than a fork. It does what it’s made to do and no more. And if we’re being honest here, 90% of our entertainment we consume each and every day is designed to be nothing more than disposable pop entertainment. Plain and simple. It’s not supposed to uplift, enlighten or improve the quality of life. It is made to entertain. Period.

Mind you, all this doesn’t mean that I’m defending the quality of A FALL FROM GRACE. I actually think that Tyler Perry should have had some fun and bunged up the print of this movie the way that Quentin Tarantino and Robert Rodriguez did for their movies in their “Grindhouse” double feature. Because A FALL FROM GRACE is basically a 1970s/80s Grindhouse movie that wouldn’t have been out of place playing on 42end Street back in the day. And if Tyler Perry had made this movie look like it was a movie from the 1970s, I think people would have relaxed and had fun with it. Sometimes a movie can look so good that it actually works against the material and I think that’s the main problem with A FALL FROM GRACE. You rightly expect a movie that looks this good to be a lot better than it actually is. 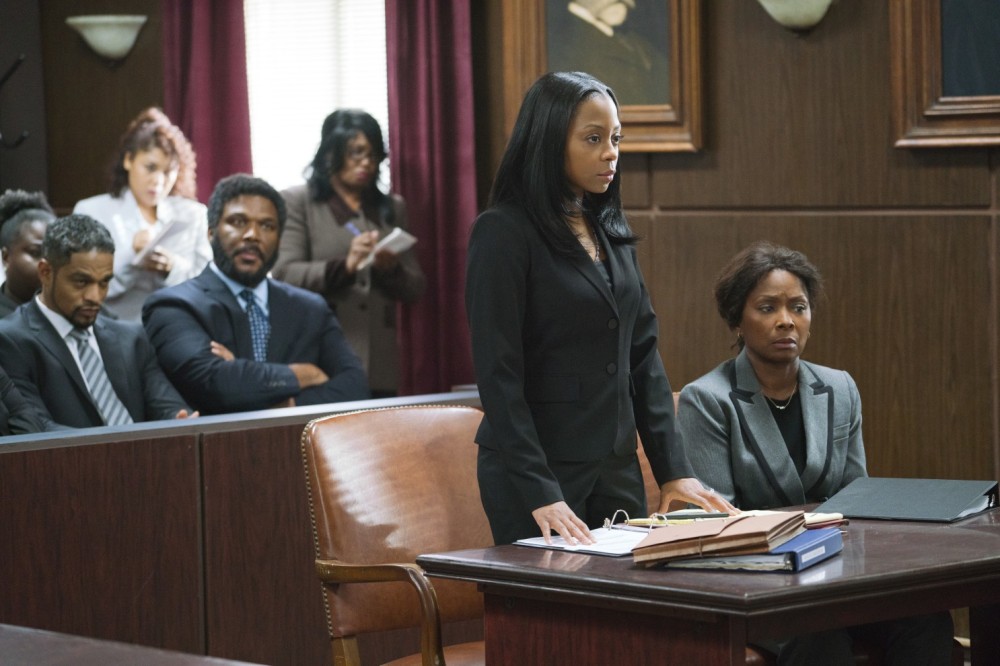 It’s got rock solid performances from Phylicia Rashad and Crystal Fox that anchor the movie and gives it weight and feeling. They’re such terrific actresses I honestly believe they’re incapable of delivering a bad performance. Much has been said about Tyler Perry shooting the movie in five days but it’s really no major feat if 75% of your movie consists mainly of one scene after another of two people sitting down talking. 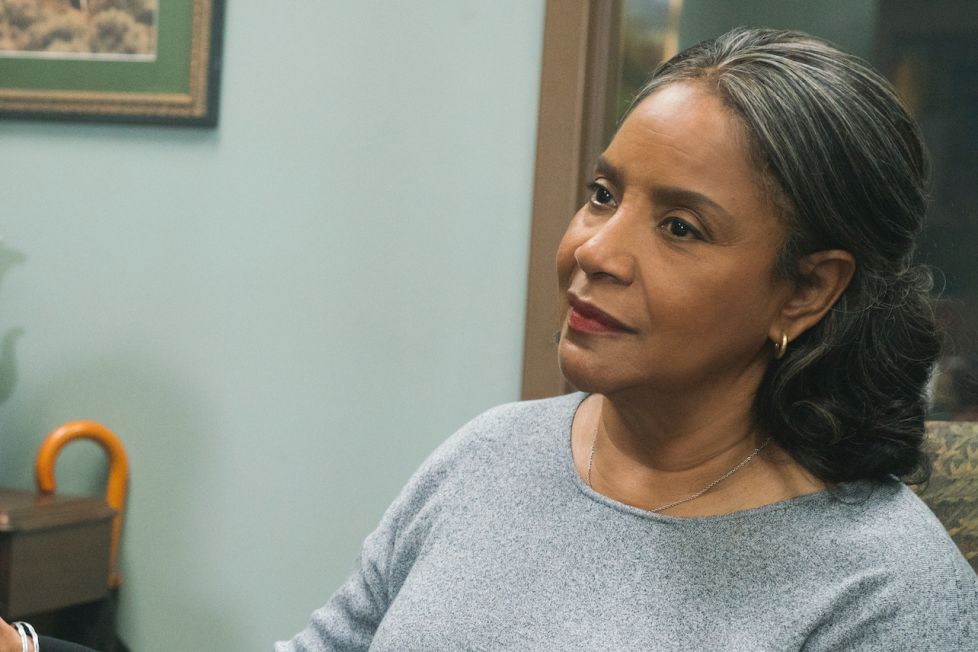 So am I recommending you watch A FALL FROM GRACE or not? Well, if you’re a Tyler Perry fan then you’ve most likely seen it already and if you’re not, then you haven’t. So, anything I say won’t sway you one way or the other. As for me…well, Patricia and I watched it at 11:30 at night when we simply wanted to wind down after a long day and watch something that didn’t require us to work that hard to digest it. And that’s the best recommendation I can give A FALL FROM GRACE. If you want Filet Mignon in your African-American film watching then go watch the films of Charles Barnett, Spike Lee, Kasi Lemmons, Gordon Parks, Ava DuVernay, Barry Jenkins or Oscar Michaeux. But if you want a Big Mac, Large Coke & Fries, then watch A FALL FROM GRACE.