I have not watched all of the Godzilla movies, but I’ve watched most of them, and this is the first time I watched a Godzilla film and found myself wishing for the human scenes to last longer and the kaiju scenes to be done with as soon as possible.

This is a shame, in a lot of ways, because Takao Okawara and Cinematographer Masahiro Kishimoto have shot Godzilla and his battles beautifully. I was looking at some Silver Surfer art from the great John Buscema the other day and making note of how well he uses perspective with the Surfer, framing one particular panel slightly above and behind the Surfer so we can see the majestic landscape before him. (Ron Garney did a fantastic job with perspective during his Surfer run, too.) Kishimoto does a similar thing with Godzilla a few times in THE BATTLE FOR EARTH.

There’s a fantastic underwater fight between Godzilla and Battra that starts out as the usual oceanic fight and then goes beneath the surface, eventually ending with the kaiju being submerged beneath the ocean floor. For the first time, too, that I can recall, we’ve got a Godzilla that has a bit of giddy-up in his step. While not running sprints, there’s a few instances where Godzilla is moving with purpose through the city and not just lumbering.

None of this is revolutionary cinematography, but it’s a welcome, slight variance to the Godzilla franchise, and it’s telling that in a series that’s lasted this long — BATTLE FOR EARTH is the 19th film in the franchise, and the fourth of the Heisei Period — how much a little variety can keep things fresh. By this point, we’ve seen Godzilla stomp over plenty of cities and across plenty of ocean floors, so any small change in perspective can provide a whiff of freshness to hard-traveled ground.

It’s the human scenes that carry THE BATTLE FOR EARTH, however. While the Heisei Period of Godzilla films has shown a more adult-driven style of story, GODZILLA AND MOTHRA has a gentler touch to its story. The focus here isn’t on communal guilt, or grief, or the uncaring hand of fate, it’s about a broken family reuniting as better people.

The previous entry in the franchise was the uneven and unsatisfying Godzilla vs. King Ghidorah, which suffered from a convoluted time travel plot and Godzilla fights that were a bit too old school in an unflattering manner. GODZILLA AND MOTHRA fixes the tonal problems of the last film, but in the process makes Godzilla feel like an extra in his own movie.

The questions, “What if we had a Godzilla movie and Godzilla never really showed up?” was answered with Cloverfield, and BATTLE FOR EARTH might have been a stronger movie if they’d just left Godzilla on the sidelines. The film was put together in a hurry, and cobbled together out of abandoned attempts to get a Mothra film made, and BATTLE is really a Mothra movie that carries the box office burden of needing the presence and star power of Godzilla to get made. There’s very little thought given to the plot dynamics of Godzilla here, which makes him feel like a narrative party crasher who just wants to do keg stands and break furniture because that’s what people expect him to do.

Even the structure of the film reinforces this. The human plot is wrapped up long before the final battle takes place, so the huge finale between Godzilla and the unified Mothra/Battra front contains little in the way of emotional stakes. It’s just a fight. It’s just a fight that the humans are watching, already ready to move on with their lives.

That’s a failure of the script, but the story of the family is a counterbalancing strength. As the film opens, Takuya Fujito is in full Indiana Jones mode, robbing a temple of a sacred artifact. He barely escapes, but the police are waiting for him, and he ends up in jail. Enter a representative from the Marutomo corporation and his ex-wife, Masako Tezuka (Satomi Kobayashi), with an offer for Takuya: explore Infant Island for Marutomo in exchange for being let out of jail.

Once there, Takuya, Masako, and Kenji Ando (Takehiro Murata) discover cave paintings depicting giant insects fighting each other. In proper Indy fashion, sunlight enters the cave and lights the way to a passageway that leads them to a giant egg and a pair of fashionably dressed miniature women called Cosmos. The women explain that in ancient times there was a civilization that tried to control the global climate, which led to the Earth creating Battra to combat this, but that didn’t work out so well because Battra started attacking the Earth. This brought Mothra into the conflict. Now that Mothra’s egg has been discovered, thanks in part to a meteoroid that crashed into the Earth (and awoke Godzilla, lest we forget about him), and the fear is that Battra will have been awakened, as well. 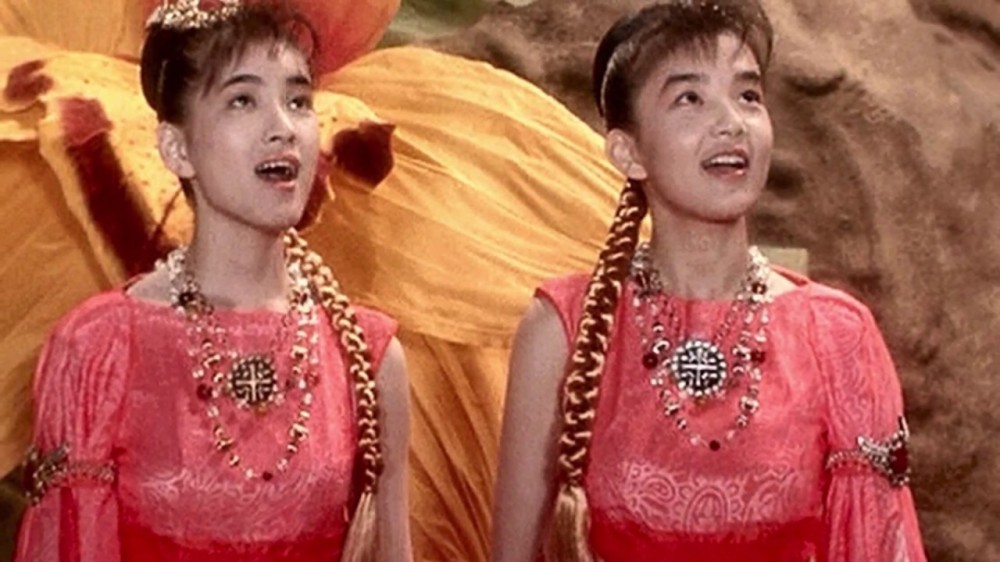 This is where everything converges: Mothra hatches on the voyage across the ocean, Godzilla arrives, Battra arrives, and we get treated to that awesome underwater battle.

When the kaiju cede the screen time back to the humans, that’s when the complexities emerge. Ando steals Cosmos and brings them back to his boss at Marutomo, who wants to feature them in advertising. Ando isn’t a bad guy and feels bad about it, but a dude needs his paycheck. This leads to Takuya stealing Cosmos back, but instead of turning them over to Masako, he tries to sell Cosmos to the Americans.

And this leads to Masako arriving on the scene with their precocious child, who just doesn’t want her daddy to be a thief. Heart properly melted at the disapproval of his daughter, Takuya is put on the path to redemption and a reconciliation with his wife.

The human story effectively ends there. There’s some clean up with Ando speaking truth to power over at Marutomo, but the family is back together with nothing to do but sit on the couch, eat popcorn, and watch a solid, if anticlimactic final battle between two giant bugs against a giant lizard.

GODZILLA AND MOTHRA: THE BATTLE FOR EARTH is a Godzilla movie that plays it safe. This is an all-audiences film, absent of a heavy pathos, and generous with feel good moments and proper monster fights. It’s a bit of a mess, but it’s a well-meaning mess, in most regards, and while it’s not a movie I’ll quickly toss back into the Blu-ray player, if I wanted to give a Godzilla movie to a kid to try and make a new fan, this is a good place to start.