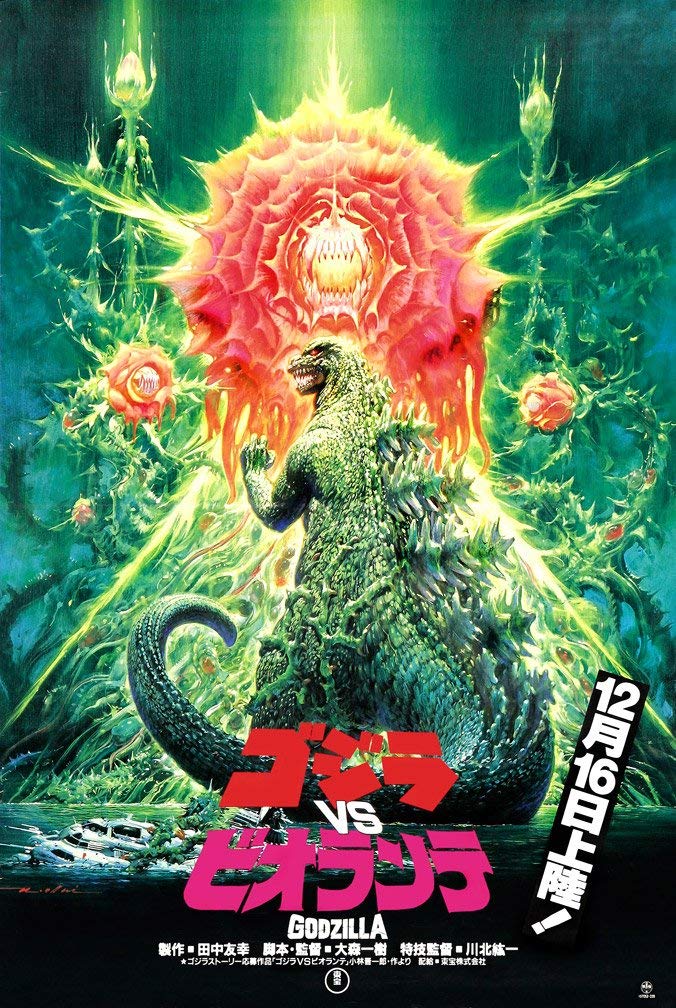 Whenever I get a hankering to finally popcorn up and start that movie podcast I’ve been talking about for nearly a decade now, it’s usually because of movies like GODZILLA VS. BIOLLANTE.

There are a handful of reasons for this, not the least of which is that I love this film, the 17th installment in the Godzilla franchise and the 2nd film in the Heisei era. BIOLLANTE is a direct sequel to 1984’s The Return of Godzilla, but it is by no means a rehash of either the standard Godzilla film or Return. It is also not a wildly different movie. BIOLLANTE manages to be both respectful of the franchise and offer something fresh.

And we have a dentist to thank for that.

We’ll come back to him.

GODZILLA VS BIOLLANTE is the kind of movie that just makes me want to sit down with a friend or three and talk the heck out of this film because there’s so much going on (most of it good, some of it not) that the chat is bound to surprise you as much as the film, itself. Where do you want to start? With the themes of biotechnology and genetic engineering? With how the film is so 1980s it hurts? Maybe corporate espionage? Love? Grief? Violence? Telepathic empathy? The subtle but consistent manner in which the film handles generational responsibility and guilt, as an older generation exits off the stage and the younger generation rises to the fore, charged with fixing the mistakes they did not make as they try not to repeat them? The confused music score that is equal parts brilliant and off-putting? The awesome fight scenes between Godzilla and the Navy, the Army, Special Forces, Biollante 1, Biollante 2, and a teenage girl? Maybe you want to start with Biollante, a monster that at first looks like Swamp Thing and Audrey II had a baby and later looks like it escaped from Jim Henson’s Creature Shop and ended up in Japan instead of Thra. 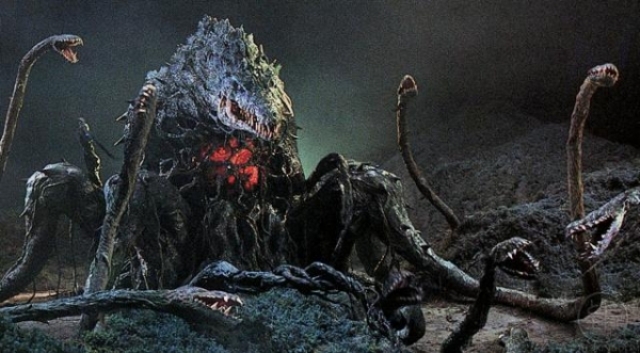 Or maybe we should just start with Godzilla.

Except … you can’t really start with Godzilla because to explain his actions, you need to understand how the violent goals of the military and the greedy goals of corporate espionage intersect with the most powerful motivator of them all: grief.

As the movie opens, we’re in the direct aftermath of The Return of Godzilla. Two corporations, the Middle Eastern Saradia Institute of Technology and Science and the American Bio-Major are attempting to gain control of a sample of Godzilla’s biological tissue so they can do evil science things to it and rake in the cash. We see American soldier boys and a Saradian hitman battling it out for control of the sample in a sequence that couldn’t be more 1980s if it was the film poster for Sly Stallone’s Cobra.

Saradia gains control of the organic matter and botanist Dr. Genichiro Shiragami (Kôji Takahashi) is brought in to attempt to merge Godzilla’s cells with plants in order to turn Saradia’s ecology from desert to green. Shiragami has brought his daughter, Erika, along and while he’s meeting with Saradia’s CEO, she’s exploring the labs. Terrorists attack the facility. Erika is killed and the cells are destroyed.

Cut to five years later. The grief-stricken Shiragami is attempting to preserve Erika’s soul by merging her cells with those of a rose plant. A teenage psychic is brought to Shiragami’s house in an attempt to communicate with the Erika/rose hybrid.

She is unsuccessful, but we can already see the complex manner in which writer/director Kazuki Ōmori is going to weave the various strands of the story together.

GODZILLA VS. BIOLLANTE is one of those films where there’s a hell of a lot more going on than a lot of critics want to give a film where a guy in a rubber suit smashes up a film set. This is a smart movie. What’s more, it’s a movie full of smart people, some of whom act honorably and some who do not, but most of whom act with the kind of intelligence and professionalism one would expect of someone in their position.

That goes across the board. The Saradia hitman is actually really good at killing people. The scientists are really good at creating things, making massive leaps forward in genetic engineering and then reacting smartly to the unintended consequences of their actions. The military is really good at attacking Godzilla. The psychic is really good at feeling emotions. All of these strands exist both on their own in BIOLLANTE and in concert with one another: Biollante is a creation of science that “speaks” to the psychic, who redirects Godzilla to where the military wants to attack him, who then successfully implant a biochemical weapon inside of Godzilla, who still tears apart a city and proves incredibly resilient to the attack, forcing the military to run an audible based on a hypothesis put forward by the scientists.

Too often a film like BIOLLANTE is labeled as a “popcorn flick” or “monster movie” or “mindless action film” as a way of justifying the enjoyment of a dumb movie. That cannot be the case here. There are too many characters and too many plots who act both alone and in concert with one another for this film to be just a dumb popcorn monster. Successful Godzilla films work when both the human portions of the movie and the Godzilla parts can stand on their own, but here it’s not just the humans and the monsters, it’s the scientists and the military and the psychics and the corporate spies and, yes, Godzilla, that can all stand on their own. Very few characters in the movie feel like they are included just to advance a plot point. Instead, nearly every character has their own reason to act the way they do. The result is a film where it feels like what happens is a direct result of the actions and beliefs of the characters, and not just as a reaction to a giant lizard monster rising out of the ocean.

What Kazuki Ōmori pulls off here is in the same vein as Joss Whedon’s first Avengers film. No, BIOLLANTE is not as entertaining as Avengers, but Ōmori, like Whedon, doesn’t take a shortcut just because he can, and as a result, he helms a film that has a lot stronger infrastructure than most films in their genre.

I said in my review for Return that one of the things I love about the Godzilla franchise is how adaptable it is to different genres and tones, and the impressive thing about BIOLLANTE in this regard is how the film works as an introspective techno-thriller that feels like a James Bond film crashed into a science-fiction movie set against the background of a horror movie …

… while working as an extended lament about the consequences of actions undertaken when consumed by grief and fear.

“Godzilla and Biollante aren’t monsters,” Shiragami says late in the film. “It’s the arrogant scientists who create them.”

BIOLLANTE contains one of my favorite scenes in all the Godzilla movies. A group of schoolchildren have all been having the same dream, a dream that has been slowly growing in clarity. The children sit at their desks to draw their dream and when they’re asked to hold up their pictures, we see a a room full of kids hold up their interpretation of Godzilla, rendered in crayon.

Which brings us to the music, which is … something. The score by Koichi Suniyama utilizes themes from the classic Akira Ifukube days (sometimes dropping the actual old score right into the movie), but it also modernizes the main theme with synthesizers and guitars that’s magnificently horrid. I don’t want to listen to it, but I can’t stop listening to it, either. Other parts feel like they’re unused pieces from John Williams’ original Superman score.

The film continually pairs members of the older and younger generations, and mostly comes out on the side of the generation that is now coming into their own, but doesn’t do so through a condemnation of the older generation as much as it allows the older characters to realize their mistakes.

Because of this, GODZILLA VS. BIOLLANTE serves as a passing of the torch. It’s time, the film says repeatedly, for the young to step up. Residual guilt about nuclear weapons has been replaced by a growing fear of genetic engineering and malicious corporations acting as nation states determined to grow their own power, no matter the cost. The film’s catharsis comes in Biollante’s death. The creature that was created because of Shiragami’s grief dies and releases the soul of his daughter.

It’s a beautiful moment. With Biollante dead, Erika released, and Godzilla ambling for deep waters, the film cleanses the sins of the fathers from the earth and allows the sons a fertile world in which they can make their own mistakes and, one hopes, their own victories.

GODZILLA VS. BIOLLANTE is my kind of movie.

After Credits Scene: I said up at the top of this review that we owe a debt of thanks to a dentist. That dentist is Shinichirō Kobayashi. When Godzilla producer Tomoyuki Tanaka decided to green light a sequel to Return, he ran a contest, allowing fans to pitch a story. Kobayashi won, crafting a story around the hypothetical death of his daughter. That spark gave birth to Ōmori’s film.