If you spent enough time in my company in recent years then you’ve most likely heard me carrying on whining and complaining about two things; #1: TV series filled with way too much padding and bloat. Series that have enough story for a lean six to eight episodes but insist on dragging on for ten or twelve. That’s one of the reasons why there’s maybe a dozen Netflix series in my queue that I’ve started in the past two years but never finished. I simply cannot continue to sit through two, three, even four episodes where absolutely nothing is happening and the actors are simply going through the motions until they get to the material that really matters.

#2: The Death of Private Eye Shows. Lately I’ve been watching reruns of old P.I. series on Amazon Prime and MeTV as I miss good old-fashioned private eyes who don’t use computers or forensics to solve crimes. Instead they rely on their own brainpower, their knowledge of human nature, their years of experience. They don’t have a support crew to back them up. Their support is a .38 S&W or .45 Colt automatic. They usually have a loyal secretary who somehow doesn’t mind never getting paid and has a frenemy relationship with somebody on the police force, usually their ex-partner.

SHADOW ticks off a lot of the above boxes and throws in three bonus boxes as well: the hero has an edge on the bad guys that is straight outta the pulps. The entire vibe of the series is pure 1970s/1980s TV detective/action shows. By the time I got to the end of the first episode I 75% expected to see that beloved Cannell Entertainment logo that ended those wonderful TV shows created by Stephen J. Cannell. And yes, I think SHADOW is that good. It easily evokes the spirit of those classic Cannell shows we all watched and loved. And the third box is the kicker: the cast is 95% African as the series takes place in Johannesburg, South Africa.

While not as crime ridden as say, Gotham City or Basin City, Johannesburg has more than enough criminal masterminds at work to keep ex-police officer Shadrach Khumalo (Pallance Dlada) busy in his new role. Known on the street as “Shadow” he now operates as an unlicensed private eye/vigilante for hire. He’s the proverbial guy that you go to when you can’t go to the police and presumably can’t find The A-Team. He’s often assisted by his former partner Max (Khathu Ramabulana) who acts as a sort of unofficial liaison between Shadow and the police. Shadow lives with his sister, Zola (Tumie Ngumla) who is now confined to a wheelchair due to a car crash. She was a passenger in the car racing to the hospital where Shadow was taken after been hit by lightning.

Remember that edge I spoke of earlier? The one straight out of the pulps? Here it is: due to being struck by lightning Shadow is now incapable of feeling any pain and that is definitely a plus in a fight. Be it against fists, knives or even guns. One of the reasons Shadow is now doing what he does is that it enables him to lift a lot of cash from the bad guys as he hopes to be able to pay for a highly experimental and even more highly expensive surgical procedure that will enable his sister to walk again. The relationship between Shadow and Zola is a nice one. She knows full well what he does at night and if this was an American TV show, we’d no doubt have endless scenes of her whining and complaining that he’s going to get himself killed. It’s a refreshing change that we don’t get that here. Zola helps out as much as she can, even encouraging Shadow to take certain cases that for one or another he doesn’t feel he should get involved with. 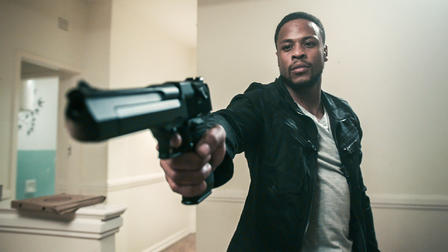 And Pallance Dlada plays Shadow in the best tough guy tradition. This is a guy I could easily see hanging out with John Shaft and Philip Marlowe. He’s my favorite kind of hero; the one that does the right thing simply because it is the right thing to do and he doesn’t spend a whole lot of wasted time agonizing and angsting about it either. There are bad guys out there screwing with good people and he’s got the ability and the nerve to put the breaks on them. Shadow’s relationships with his friends and family is one of the best things about the series as it keeps him from being a broody loner.

Although there are plot elements that run through the eight episodes of S1 there’s no season long story arc and for that I was even more grateful. Shadow solves his cases in one episode with no loose ends and a solid conclusion. We know who done it and why. Bing. Bang. Boom. Let’s move onto the next case. And while some of the cases are familiar and ones we’ve seen in other crime/cop shows such as gangsters running a blackmail scheme on helpless young women (a case that ends with Shadow and Zola gaining a roommate, Ashley who is a medical doctor/ exotic dancer) and a deranged sniper terrorizing the city there are weirder cases to enjoy. Such as the serial killer who constructs life sized working snow globes to showcase the bodies of his victims. Or Shadow investigating a haunted house. Or Shadow having to join an online game that offers player enormous sums of money to perform dangerous stunts to save a friend.

Not that SHADOW doesn’t have its faults. The show doesn’t have much of a budget but to me that works in its favor as it just adds to the 1970s/1980s action TV show vibe and there are a couple of supporting characters who promised to be highly interesting but abruptly and without any explanation at all disappear and are never heard or seen of again.

But if you’re need something to binge-watch this weekend then I Highly Recommend that you give SHADOW a try. It’s unpretentious, undemanding Old School Action TV that I think you’ll enjoy as much as I did.

One thought on “Shadow”