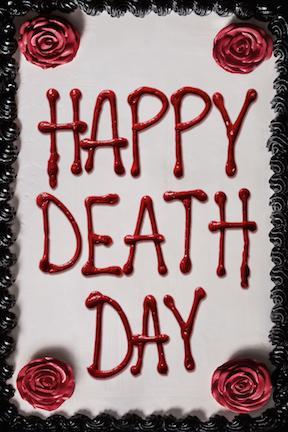 I love how HAPPY DEATH DAY is blatantly upfront with its premise. It doesn’t try to pretend it’s something groundbreaking or particularly innovative in its premise. It takes a slasher movie and marries it to the premise of “Groundhog Day.” The slasher movie it’s most compared to is “Scream” and I can see that because HAPPY DEATH DAY has that same kind of self-aware snarkiness in that it’s a slasher movie that knows full well it’s a slasher movie and has fun messing with the tropes of the genre. Especially in its choice of heroine. In your typical slasher/horror movie Teresa ‘Tree’ Gelbman is the Bad Girl who we look forward to see get offed by the killer. She’s rude, spoiled, self-centered, not all that bright, emotionally inept and just an All The Way Around The World Class Bitch. I was amused to see this type of character who is usually in this type of movie just to give the heroine grief be made the protagonist that we root for even though she’s not a likable person at all.

Bayfield University student Teresa ‘Tree’ Gelbman (Jessica Rothe) wakes up badly hungover in the dorm room of Carter Davis (Israel Broussard) after a night of hard partying. This isn’t an unusual situation for Tree. On returning to her own dorm room she is presented with a homemade cupcake made by her roommate Lori (Ruby Modine) as this day is Tree’s birthday. A day she doesn’t particularly care for.

Tree makes her way through her day generally being her usual nasty and unpleasant self to everyone including her married professor Gregory Butler (Charles Aitken) who she is having a very hot and heavy affair with. During the course of the day Tree is increasing disturbed by a baby masked figure that seems to be everywhere she is. But seeing as how there’s a major football game that weekend and the school’s mascot is a baby (yeah, I thought that was weird, too) there’s a lot of people wearing baby masks so maybe it’s a coincidence, right?

Like I said, Tree isn’t the brightest bulb in the chandelier and as a result her constantly being killed as she slowly put clues together is frustrating for her and often very funny for us. This isn’t a movie trying to gross you out with gore but it does manage to get in some fairly awful ways for Tree to go. And, much like Bill Murray in “Groundhog Day” Tree finds ways to have some fun with her predicament as since she has knowledge of what people are going to do and say, she can manipulate events to amuse herself and us as well.

The movie belongs to Jessica Rothe from start to finish. Due to the way the movie is constructed she’s on screen constantly and she shoulders that responsibility with panache. She struts through the movie with an easy confidence that reminded me strongly of the first time I saw Lizzy Caplan, Anna Faris and Krysten Ritter on screen. Yeah, she’s that good. And the supporting cast backs her up with energy and considerable talent of their own. This is the sort of movie that really worked for me because I was unfamiliar with the cast and didn’t recognize anybody from any previous movies so that helped me get into the story and appreciate it for what it was. And it was a lot of fun to watch. If if you haven’t yet seen HAPPY DEATH DAY this is a terrific time to jump on it. It, along with the sequel makes for a great Friday or Saturday Night Double Feature. Enjoy.