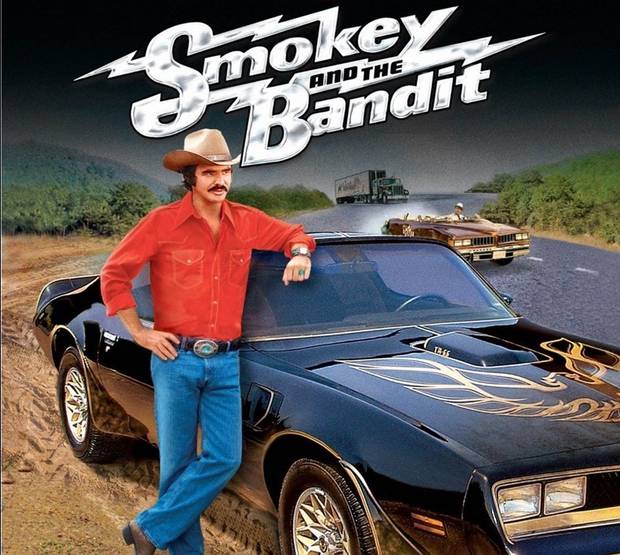 There’s a scene early on in SMOKEY AND THE BANDIT where Bo Darville/The Bandit (Burt Reynolds) is outrunning the police in his Trans Am and hides behind a building. The police go past and The Bandit slowly moves his car out of hiding. Burt Reynolds pauses, looks directly at us, breaking The Fourth Wall and gives us the biggest shit-eatin’ grin imaginable. And right there he’s got us along for the ride. 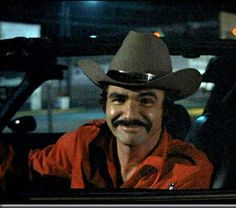 Bo Darville/The Bandit (Burt Reynolds) is a legendary trucker who accepts a bet from Big and Little Enos Burdette (Pat McCormick and Paul Williams) that he can drive to Texarkana, Texas, pick up a load of 400 cases of Coors beer and bring it back to Atlanta in 28 hours. Now, at the time this movie was made, Coors beer could not be sold east of The Mississippi. Therefore, it was considered bootlegging. In fact, early on in the movie we see a trucker arrested who has taken up The Burdettes on their bet. But The Bandit figures that with the help of his partner Cledus Snow/The Snowman (Jerry Reed) and a supercharged black Pontiac Trans Am, they can do the job. The Snowman will transport the beer in their custom eighteen-wheeler while The Bandit runs blocker and distracts the police in the Trans Am. 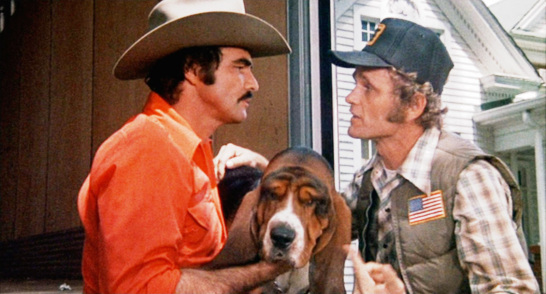 Along the way back to Georgia, Bandit picks up a complication in the form of a runaway bride named Carrie (Sally Field) who was supposed to marry the son of Sheriff Buford T. Justice (Jackie Gleason). And for the rest of the movie Sheriff Justice pursues The Bandit and that is really all you need to know. 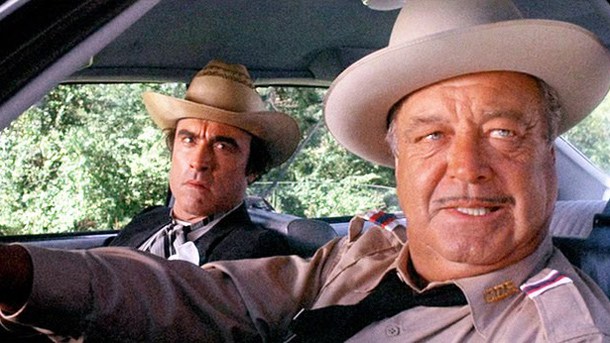 The most remarkable thing about SMOKEY AND THE BANDIT? According to most of the people that worked on the movie, 90% of it was made up as they went along. I would never have guessed. The jokes, gags and stunts are so remarkably timed it’s downright amazing to think that most of them were made up on the spot. The whole sequence in the restaurant where Sheriff Justice orders a “Diablo sammich, a Dr. Pepper and I’m in a gotdamn hurry” was supposedly improvised by Gleason. 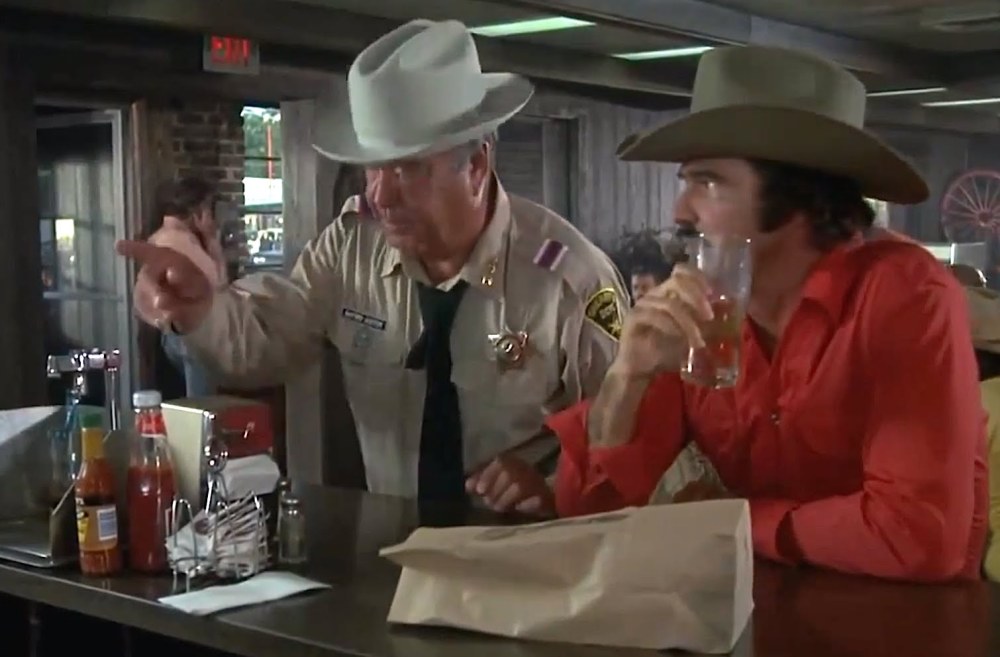 And maybe that is what is behind the genius of what makes SMOKEY AND THE BANDIT so much damn FUN. Everybody just threw out the script and the rule book and just made a FUN movie. And it paid off. There was only one other movie that made more money in the year of 1977 and that was a little thing called “Star Wars.”

Burt Reynolds has never been more macho or more charming than in this movie. You can tell he’s having a ball right from the start and he invites us to have a ball as well. I don’t think there’s another movie he’s made that demonstrates The Burt Reynolds Charm as much as this one. Jerry Reed is excellent as his partner/sidekick and Sally Field is so adorable it hurts. 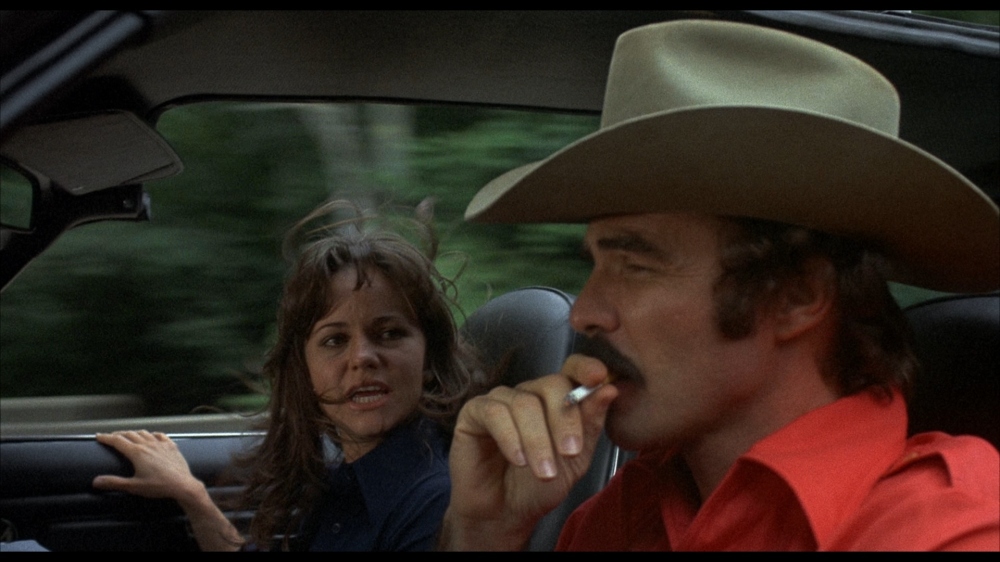 But it’s Jackie Gleason as Sheriff Buford T. Justice who steals the movie. From his first scene where he accosts a gang of roadside car thieves, Gleason owns the movie and he keeps it. I’ve mentioned the scene in the restaurant. Watch it just for how Gleason orders. It in itself is a masterful scene of comedy. And all throughout the movie, Gleason delivers comedy gems such as when he confronts an African-American police office he thought was white. And every insult he throws at his son (Mike Henry) is a gem. And just as nobody can say “Rat bastard” quite like Robert DeNiro, nobody can say “Sumbitch” like Jackie Gleason. 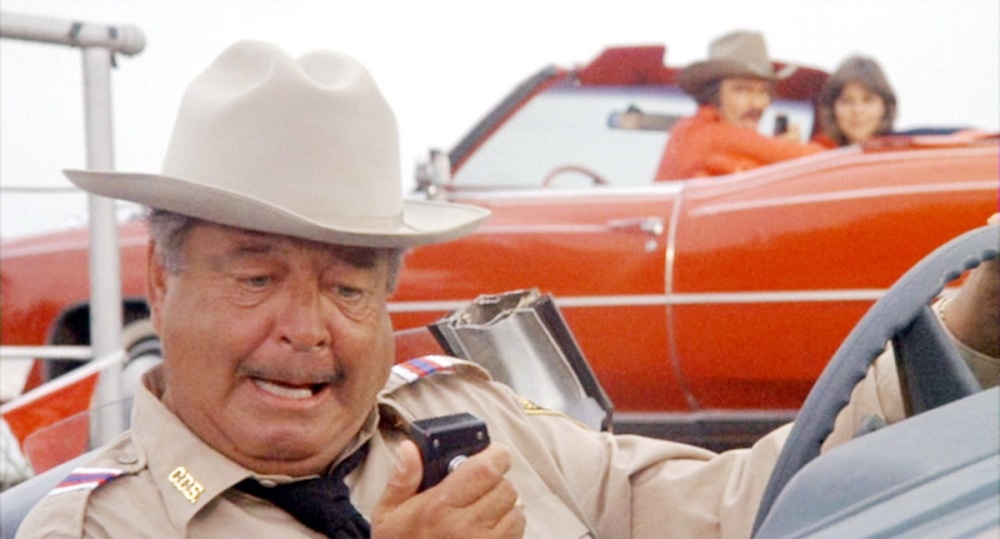 You want to watch a movie that is nothing but pure fun from start to finish and is representative of what Burt Reynolds was on film? Watch SMOKEY AND THE BANDIT.  It works as an action movie, as a comedy and it’s quite simply one of the best movies I can recommend simply as sheer entertainment.

3 thoughts on “Smokey And The Bandit”