Based on “Black Klansman” by Ron Stallworth

When I first heard about this movie I thought it was going to be a remake of the 1966 movie “The Black Klansman” which is about a black man who can pass for white initiating a one-man war against The Klan in his hometown once his daughter is killed in a church bombing. And he does so by successfully joining The Klan so that he can acquire information to destroy it from within. If you’ve got Amazon Prime I recommend checking it out. Keep in mind that it’s a (very) low-budget movie but it does feature some notably worthy early performances by Max Julien and James McEachin. And it actually is a pretty good movie I enjoyed for what it was.

THE BLACKkKLANSMAN is an entirely different story but one I also enjoyed for what it was. It’s a movie that even though it’s set in the 1970s it deals with issues that we’re still dealing with now when it comes to race. It’s a movie set in the past that looks to the future. The future we’re living in now.

Ron Stallworth (John David Washington) is the first black police officer on the Colorado Springs, Colorado police force. Fed up with the open disrespect of some of his fellow officers and with working in the records department he campaigns for more challenging assignments and gets one. Stokely Carmichael/Kwame Ture (Corey Hawkins) is coming to Colorado Springs at the invitation of the black student union. Ron is assigned to go undercover wearing a wire to check out the crowd and determine if there’s a legitimate danger to the (white) community at work here.

Ron goes to the rally and while he doesn’t become inspired with fanatic revolutionary fever he does have a change of heart. Enough to make him want to do something really meaningful with his promotion as a detective in the intelligence division. Reading a newspaper at his desk, he sees an advertisement for the local chapter of The Ku Klux Klan and calls the number. In one of the most creative displays of bullshit I’ve ever seen in film, Ron pretends to be a white man and actually has a long conversation with Walter Breachway (Ryan Eggold) which leads to Ron being invited to join The Klan.

Ron manages to fast-talk his way into being in charge of the investigation and ropes in two partners, his fellow detectives Flip Zimmerman (Adam Driver) and Jimmy Creek (Michael Buscemi). While Ron will continue to engage Klan officials on the phone, Flip will be the public face of Ron Stallworth to contact and interact with The Klan. Adam Driver has what is perhaps the single funniest scene in the movie during Ron’s initial phone call to the Klan and he really is excellent in this movie. One of the best things about the development of his character that while he is Jewish he never actually thought much about being Jewish but his interactions with The Klan is causing him to re-evaluate his racial identity.

John David Washington fashions an extremely interesting character in Ron Stallworth. He’s a black man during the 1970s when it was definitely not popular for a black man to be a police officer. He truly believes in his work and in a really nice conversation with Patrice Dumas (Laura Harrier) the president of the black student union he expresses his honest belief that to change any racist institution it must come from within. He doesn’t look or sound much like his father, Denzel (Patricia tells me he looks like his mother and when it comes to Denzel Washington she is the authority, trust me) but his body language is just like Denzel’s. I like his acting style a lot. He reminds me of Michael Keaton believe or not in that I can actually see him thinking. You look at John David Washington and you always have the distinct impression there’s an intellect constantly working behind those eyes. 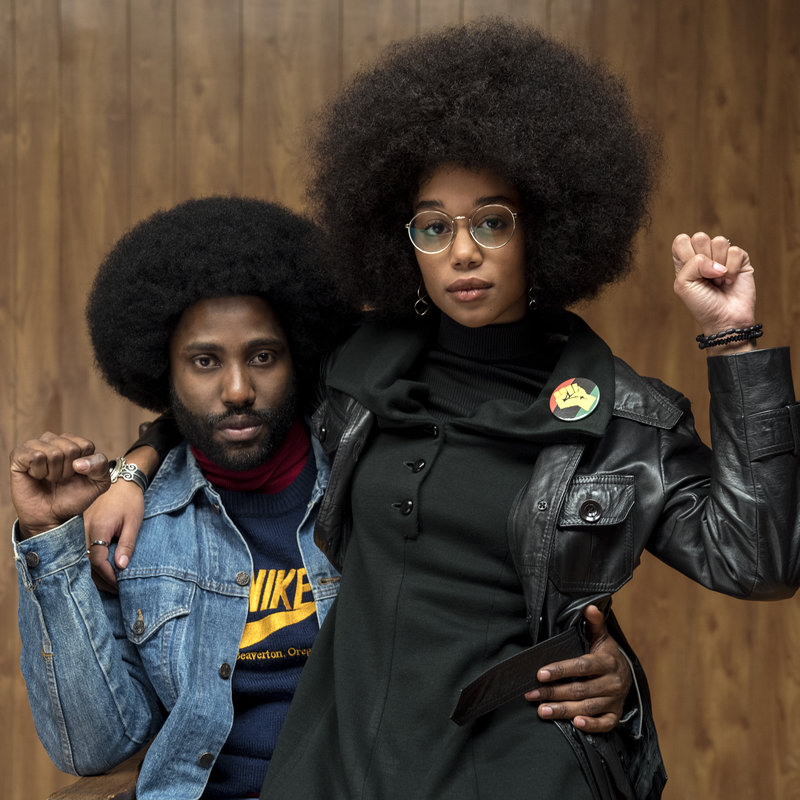 And the acting and directing in THE BLACKkKLANSMAN are both excellent. This isn’t a bombastic, by-the-numbers thriller. In fact, there’s a lot of scenes that wouldn’t be out of place in a Mel Brooks movie and I found it refreshing that Spike Lee reminds people with this movie that when he wants to be, he can be just as adept as comedy as he is at drama. In fact, remember when people were calling him “The Black Woody Allen”? There’s suspense, there’s comedy, there’s action, there’s a race against time to prevent a bomb from going off, there’s romance, there’s a truly magical musical sequence in a black club set to “Too Late To Turn Back Now” by The Cornelius Brothers & Sister Rose that is so evocative of that time period that I was transported back to when I hung out in clubs like that.

I’m delighted to see Spike Lee directing a movie like THE BLACKkKLANSMAN because I could see and feel a strength and purpose I haven’t seen or felt in a Spike Lee movie for a few years now. I’ve seen his recent movies (hey, I’m always gonna watch A Spike Lee Joint) and I sensed a floundering and disassociation those movies I didn’t sense in this one. The Spike Lee that directed this here movie is a Spike Lee who knows exactly what he wants to say and he says it with the artistry of the master director he is. Welcome Back, Spike. I don’t know where you’ve been but it’s damn good to have you back.