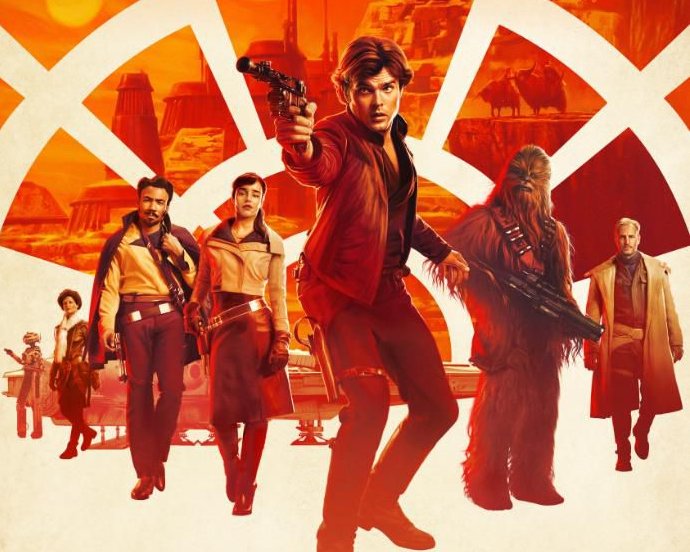 Based on characters created by George Lucas

The way I see it, SOLO (or if you want to be picky about it; SOLO: A STAR WARS STORY) is exactly the Star Wars movie we needed right about now. Much as I loved “The Force Awakens” “Rogue One” and “The Last Jedi” they weren’t exactly what you would call fun-filled romps. No, these are movies that are downright ruthless in their aim to show the world that these are not your granddaddy’s Star Wars movies. These new movies swim in some deep dark waters indeed. Beloved characters died, new characters were introduced whose motivations, goals and ideals weren’t as clean-cut and easily identifiable as those of characters in the earlier movies. I think it’s bold and important for the Star Wars franchise as a whole to present stories and characters that challenge our conceptions of what a Star Wars movie is or should be.

And then along comes a movie like SOLO to remind us that Star Wars movies can still be fun and full of the spirit of adventure and wonder that made us fall in love with the original movie. And make no mistake, SOLO is an absolute blast from start to finish. I love a movie like this that can make me feel like I’m 12 years old again. SOLO is pure Space Opera and makes no apologies for it. It’s a Space Western and it’s also a Caper/Heist Movie. And like the best of this kind of entertainment it also manages to serve up some superb storytelling and characterization into between the laser guns fights and the whiz-bang of starships hopping galaxies with the pull of a lever. 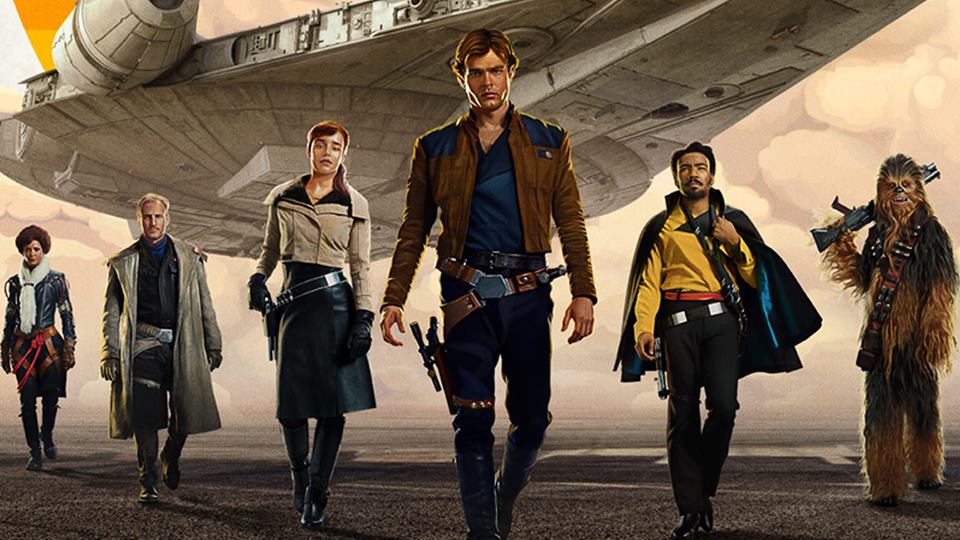 We meet Han (Alden Ehrenreich) as an orphan on the planet Corellia, a world renowned for building the best starships in the galaxy. But if you’re an orphan, life pretty much sucks. In fact, Corellia reminded me of that terrific line from “A Million Ways To Die In The West” that goes; “We live in a terrible time and place. Everything that’s not you wants to kill you.”

Han and his girlfriend Qi’ra (Emilia Clarke) make plans to escape the servitude to the local crime lord and get off world. But the plans go wrong as so many of Han’s plans tend to do. Qi’ra is recaptured and Han is forced to join The Imperial Navy to save his skin. It’s here he gains a last name: Solo as the recruiting officer takes Han’s asserting that he’s all alone literally. Han intends to be a pilot but again his plans go wrong, and he ends up in the infantry, fighting in a meaningless conflict on the planet Mimban, a world seemingly made of mud. But Mimban turns into a blessing in disguise because he meets two individuals on Mimban who will be very important to his life: the towering seven-foot-tall Wookiee Chewbacca (Joonas Suotamo) who will become his best friend and first mate. And the master criminal Tobias Beckett (Woody Harrelson) who will be Han’s mentor and give the young man his start on the road to be an outlaw, teaching him some very valuable and painful lessons along the way. 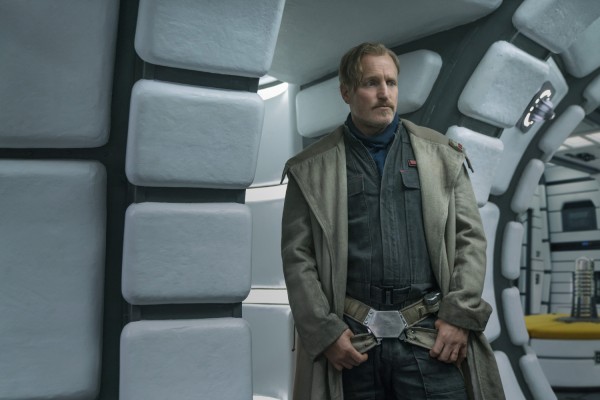 Whenever a movie like SOLO hits theaters you’ll always have those who question why such a movie is even necessary. After all, every character doesn’t require an origin story. And in fact, I do agree with them. Not every character needs an origin story. But Han Solo has been around long enough and thanks to Harrison Ford has long been established as a pop culture icon so why not explore his background and see how he became the roguish space pirate we all love? 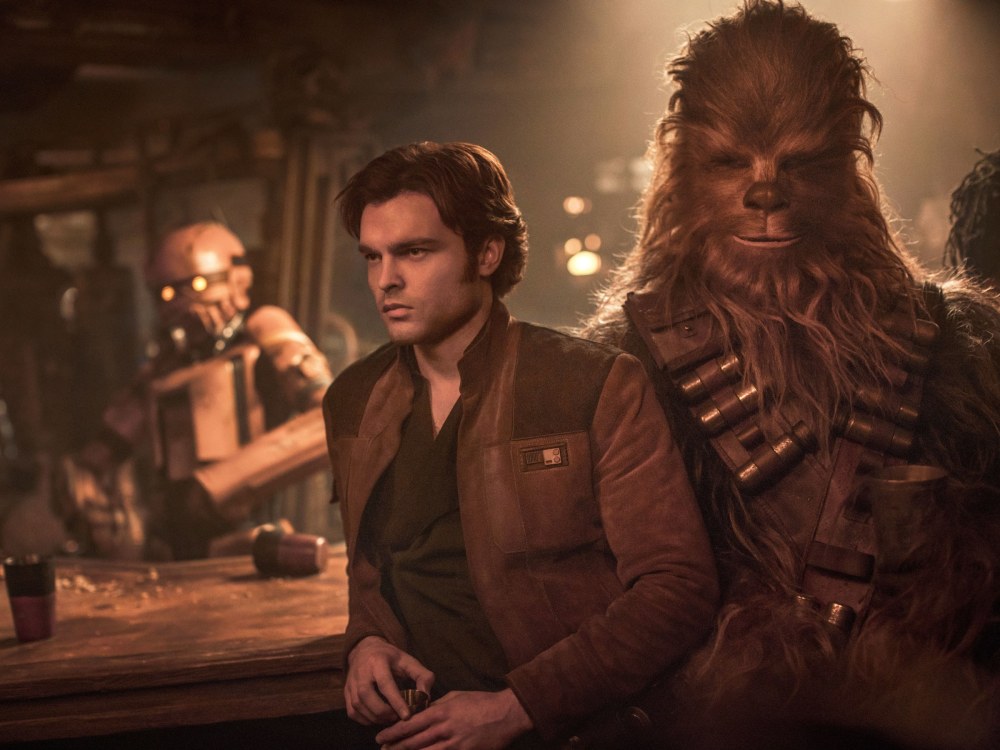 Alden Ehrenreich does a wonderful job of stepping into the role, I thought. As does Donald Glover as the young Lando Calrissian. The two of them do the same thing that Karl Urban and Zachary Quinto did in the recent “Star Trek” movies. They don’t exactly do outright imitations of Harrison Ford and Billy Dee Williams (although Glover does at times seems to be trying to imitate Billy Dee’s voice) but uncannily manage to channel the spirit of those actors so that I could easily buy these being younger versions of Han Solo and Lando Calrissian. 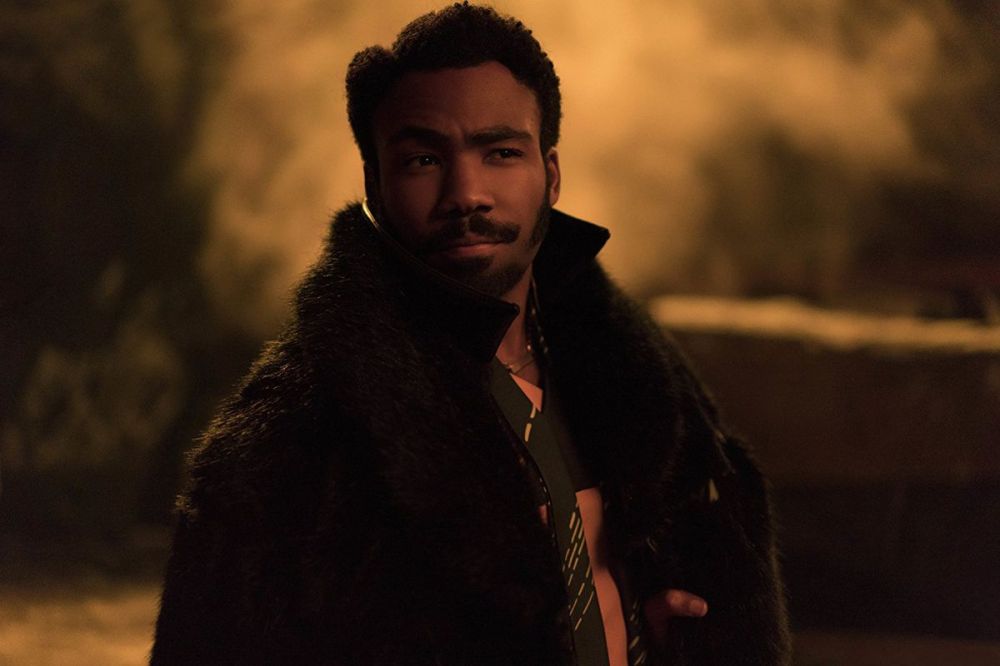 I enjoyed the interaction between Ehrenreich, Harrelson and Clarke as maybe I’m crazy but their relationships felt to me like the screenwriters were doing a sly riff on the dynamic between the three main characters of “The Good, The Bad and The Ugly.” Joonas Suotamo is a standout as Chewbacca who for the first time out of all the Star Wars movies he’s been in actually seems like an equal in the partnership he shares with Solo instead of a big furry sidekick. And Phoebe Waller-Bride is an absolute gas as L3-37, Lando’s droid sidekick who is a sort of mechanical Stokely Carmichael possessed of radical views toward how droids are treated by humans and vehemently advocates the violent overthrow of human dominance over A.I.’s.

And I can’t let this review go by without a word about the direction of Ron Howard. If you had told me previous to my seeing SOLO that he had this kind of movie in him, I wouldn’t have believed you. Howard has jaw-dropping action sequences in here that are…well, they’re jaw-dropping. Howard gives up not one but two terrific heists including one involving a train that truly has to be seen to be believed. Howard is definitely an old school director in that he doesn’t need to resort to flashy camera tricks or outrageous visuals styles to let you know he’s directing. His aim is to tell a story, period and anything else just gets in the way and I appreciated the clarity of the story. At no point was I confused as to what was happening or why even though there’s a lot of characters and all of them have their own motivations and reasons for why they’re in the story. 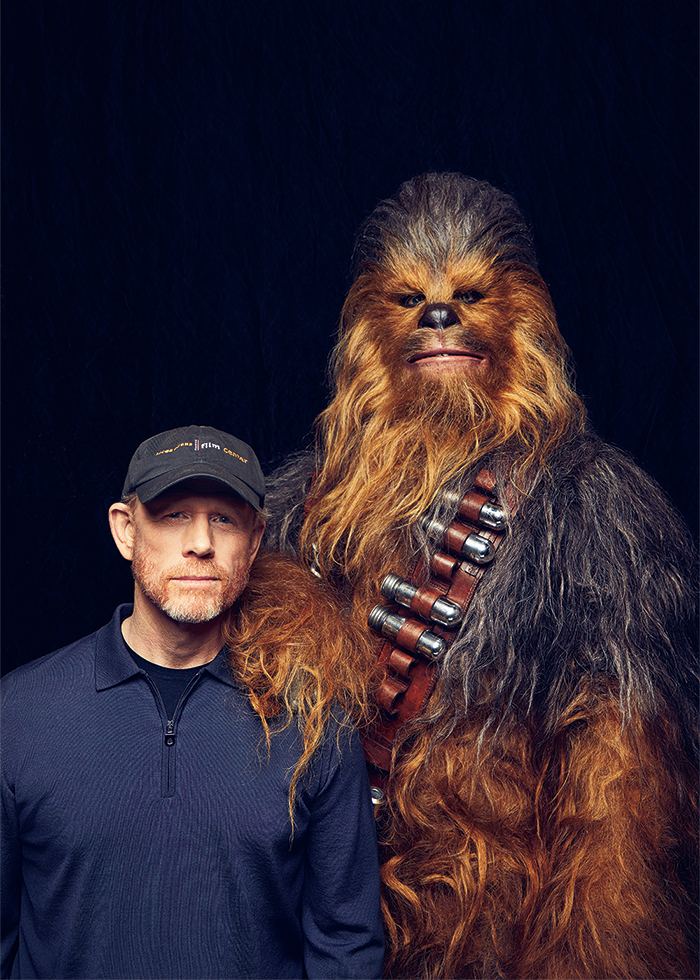 That doesn’t mean that I don’t have problems with the movie. Since most of the actors in this one have signed on to do two more SOLO movies then why couldn’t things be spread out a little? Did we really need to have Han Solo acquire his signature blaster, partners up with Chewbacca, makes The Kessel Run and wins The Millennium Falcon from Lando Calrissian all in one movie? I’d have been just as happy if the movie ended with Han telling Lando that one day The Falcon was going to be his and save him getting it for the next movie. The Kessel Run really needed to be it’s own movie, done as a homage to “Smokey & The Bandit” and “The Cannonball Run.” And I didn’t like how Lando was shown to cheat at gambling. That’s not the Lando Calrissian I know. He’s so good he has no need to cheat.

But considering those are the only two things I have to complain about, that’s still pretty damn good. As I’ve said in other reviews I’ve written, I’m happy just to be able to still go to the theater and still see Star Wars movies forty years after seeing the original in 1977. And it’s an added bonus that they’re so well made and entertaining. SOLO is a fantastic movie and should not be missed. 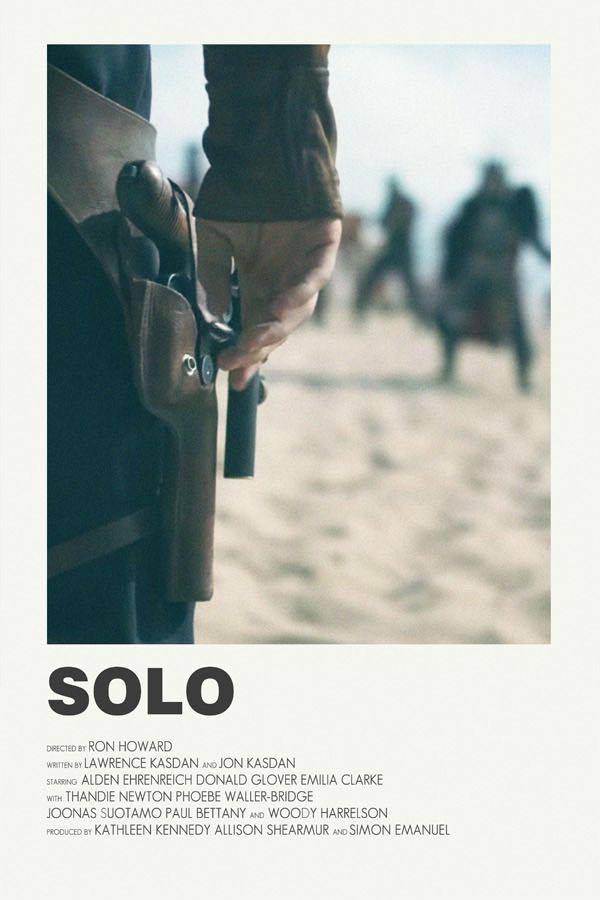 One thought on “Solo”