Directed and Written by Rian Johnson

Based on characters created by George Lucas

If you’ve been reading my reviews for any reasonable length of time then you know I do not like to waste your time or mine. So here it is in a nutshell: I love THE LAST JEDI and this isn’t going to be one of those reviews, okay? Oh, there’s some stuff about it I’m going to nitpick about, sure. Because no movie is perfect. But THE LAST JEDI doesn’t try to be a perfect movie. What it tries to be is faithful to the seven movies that have come before it and do it in an entertaining manner and for me, it did so.

So no, I do not care who Snoke (Andy Serkis) was before this movie and I have zero interest in if he’s Darth Plagueis or the baby daddy of The Wicked Witch of The West. No, I do not care who The Knight of Ren are. If they don’t contribute anything to the story outside of being Red Shirts in the service of Kylo Ren then why should I give a poobah’s pizzle who they are or where they come from? And yes, I am happy with Rey (Daisy Ridley) being a nobody and not a secret Skywalker or Solo child. In fact, her being a nobody, pointed out to her by Kylo Ren (Adam Driver) is kinda what makes her such an outstanding character. I don’t know about you but I cannot take another movie where the protagonist is “The Chosen One” whose Destiny Is To Save All Mankind.

Okay, here’s the opening crawl which will give you the plot of the movie and then I’ll get into my schtick:

If THE FORCE AWAKENS was a remake/rehash of the first STAR WARS then THE LAST JEDI is just as much a remake/rehash of THE EMPIRE STRIKES BACK. We certainly have a lot of parallels here. In both movies Our Heroes are constantly on the run from the bad guys. Rey goes to the ancient Jedi Homeworld of Ahch-To where Luke Skywalker (Mark Hamill) has exiled himself so that she can learn the ways of a Jedi Knight. Much in the same way that Luke went to Dagobah to be trained by Master Yoda (Frank Oz) who shows up in this movie as a Force Ghost. I still say that Johnson passed up a great scene in not having the Force Ghost of Yoda say to Luke; “Know you now how felt I when to Dagobah you did come, yes?”

Luke rebuffs her at first but in a wonderful scene with his old friend R2-D2 who plays the hologram of his sister Leia asking Obi-Wan Kenobi for help from the first STAR WARS movie he agrees to train her. I love Luke’s delightfully wry response to R2’s playing the hologram; “That’s a real cheap shot.” It’s not only Hamill’s delivery of the line. It’s his whole facial and body language that sells the scene as well. He’s responding to R2 not just as a machine but as a friend who he has shared many years of adventure with and he understands why R2 is showing him that hologram. It’s a great scene. One of many in THE LAST JEDI which is a movie filled with great scenes.

I love how his aspirations of being a Darth Vader wannabe is brought home to Kylo Ren by none other than his Master and he breaks away from that in this movie. He’s got a line in the movie that I love; “It’s time to let old things die. Snoke… Skywalker… the Sith… the Jedi… the rebels.” And it goes along with a scene we see early on in the movie where Rey hands Luke his old lightsaber and he throws it away. Much of THE LAST JEDI is about that. It’s time to throw away all that old stuff we’ve been watching for forty years and seven movies and just let it go. How many more years are we going to watch this pointless conflict between The Rebellion/Resistance and The Empire/First Order with no resolution? The Jedi Order have clearly failed in their mandate as guardians of peace and order so how long are we going to revere them as demi-gods of The Force?

As in ROGUE ONE the acting in THE LAST JEDI is outstanding. Carrie Fisher is just so terrific as General Leia Organa who while being every inch the leader we have seen her grown into be also communicates that she is tired because she has fought a war far longer than anybody should have had to have fought. Mark Hamill is simply brilliant as Luke Skywalker. I myself love the fact that he has embraced the example of his former masters Ob-Wan and Yoda and exiled himself to a remote planet to await death. I have heard the complaints about his scenes on the planet Crait but for me it’s just an example of how truly powerful a Jedi Master Luke Skywalker was. Say whatever you want about Luke Skywalker (and trust me, I can say a lot) but at his core, he was more than a great Jedi Knight. He was a good man who did the best he could. I absolutely love the scene where he sneaks aboard The Millennium Falcon and just by his body language as he walks around the ship you can see that Luke Skywalker is recalling past adventures and good times. Mark Hamill is a helluva actor and I’ll fight you if you say different.

Finn (John Boyega) Poe Dameron (Oscar Isaac) and Rose (Kelly Marie Tran) have their own problems trying to save The Resistance Fleet which involves a side trip to the gambling planet of Canto Bight to find a Codebreaker capable of cracking an Imperial Code which will enable them to get on an Imperial Dreadnaught, disable a tracking device and let the The Resistance Fleet escape. 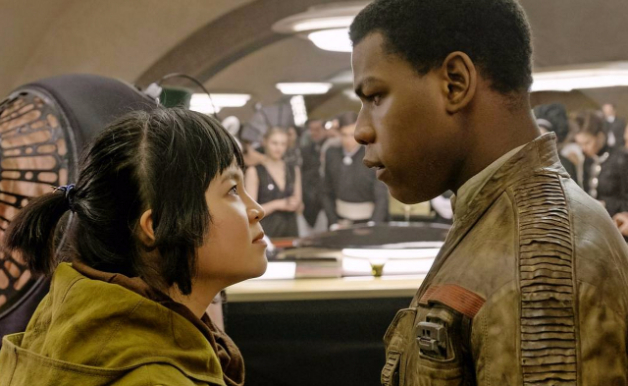 Yeah, I know. I lay it out like that and you go; “Say Wha?” But here’s the genius of THE LAST JEDI. While it’s all playing out, it makes perfect sense. You go along with it because your caught up in the excellent performances, the special effects and the sheer thrust of the storytelling.

What didn’t I like? Much as love Laura Dern I felt her character of Admiral Holdo was pulled outta left field and it should have been Mon Motha making the ultimate sacrifice. Mainly because we know Mon Motha and know how much she’s given to the cause. And much as I love Benicio Del Toro, The Codebreaker should have been Billy Dee Williams as Lando Calrissian.

3 thoughts on “The Last Jedi”