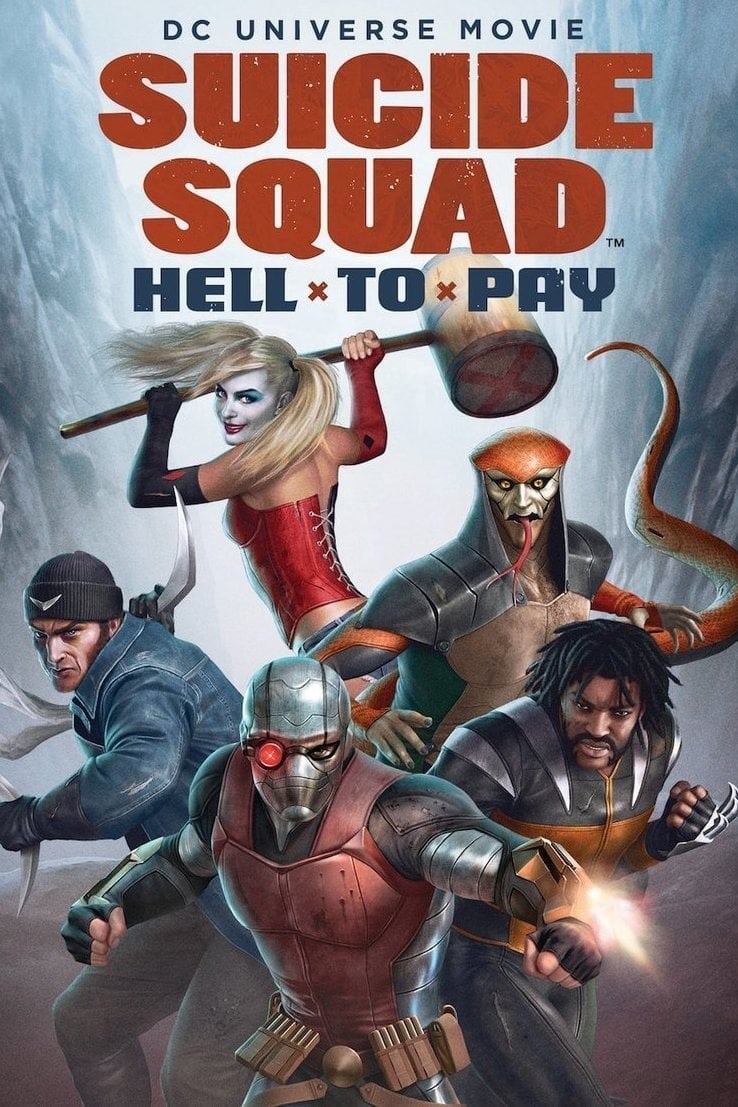 Based on “Suicide Squad” created Robert Kanigher and Ross Andru

Based on a story by John Ostrander and Gail Simone

I’m beginning to think that people know me far too well. My boy Christofer Nigro hooked me into watching this movie with one simple line; “Imagine if a Suicide Squad movie were directed by Quentin Tarantino.” That’s all it took. I’m easy, what can I say?

Thing is, he wasn’t wrong. Before we even get to the opening credits there’s a higher body count than in entire movies twice the length of this one. No lie. Something like thirty or forty people get killed before the opening credits including three members of the four-member team led by Deadshot/Floyd Lawton (Christian Slater.) Make no mistake…this is an animated movie, sure but it’s most definitely not for kids. The level of graphic violence is astounding and there’s language and sexual content that pushes this movie solidly into the “R” category. 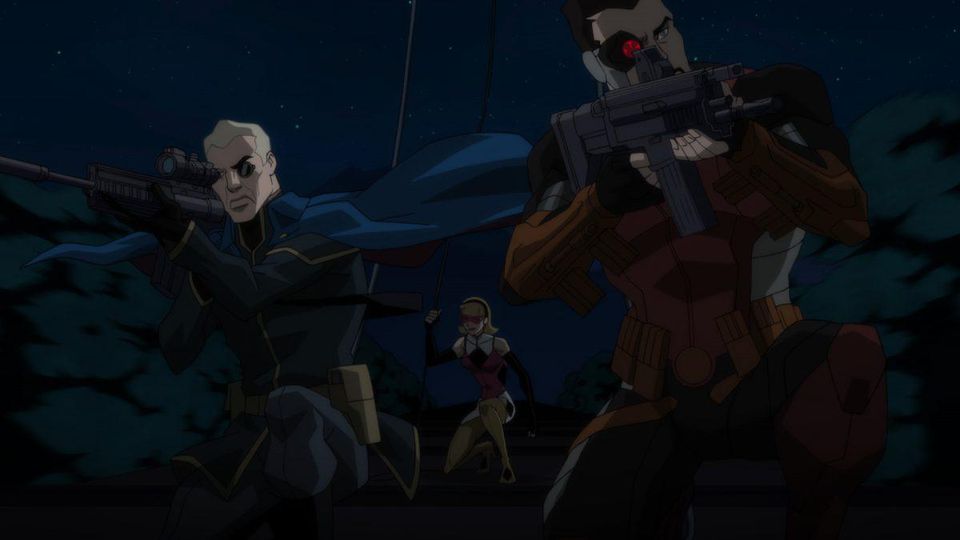 But that’s because SUICIDE SQUAD: HELL TO PAY doesn’t take the route the live action “Suicide Squad” movie does and turns the villains into good guys. These are supervillains who use their abilities to intimidate, maim, threaten and kill to get what they want. Imagine if the cast of Tarantino’s “The Hatful Eight” had superpowers and you’ll start to get an idea of what the characters in SUICIDE SQUAD: HELL TO PAY are all about.

Now, I know there are some of you who are going to say that you don’t want to watch a movie where all the characters are flat-out, no-good, amoral bastards who don’t have a single redeeming quality which is why I’m letting you know right up front that’s what you’re getting in this movie. These most definitely are not the good guys nor do they pretend to be so.

Amanda Waller (Vanessa Williams) learns that she has developed a terminal disease. She assembles a new Task Force X aka The Suicide Squad to find and secure for her a black card that has the words “Get Out of Hell Free” embossed on it in gold letters. The Suicide Squad, now made up of Deadshot, Harley Quinn (Tara Strong) Captain Boomerang (Liam McIntyre) Killer Frost (Kristin Bauer von Straten) Copperhead (Gideon Emery) and Bronze Tiger (Billy Brown) set out on their mission in a beat-to-shit Winnebago as Waller advises them that this is a mission strictly off the books. She doesn’t tell them why she wants the card or what it’s for but it soon becomes apparent to the squad that it’s one important card as they have powerful rivals also searching for it. The Reverse Flash/Professor Zoom (C. Thomas Howell) and his own team; Silver Banshee (Julie Nathanson) and Blockbuster (Dave Fennoy.) And if that wasn’t enough they also have to contend with Scandal Savage (Dania Ramirez) and her girlfriend, the former Apokoliptian Female Fury who calls herself Knockout (Cissy Jones) looking for the card on behalf of Scandal’s father, The Immortal Villain Vandal Savage.

Deadshot and the other squad members thinks this is an awful lot of high-powered super-muscle to be looking for a mere card but as they learn from Steel Maxum (Greg Grunberg) it’s way more than that. Maxum used to be the host of Nabu/Doctor Fate and he tells the squad that the card will enable the user on the event of his death to go straight to Heaven, no matter what or how many their sins on Earth. The catch is that it can be used once and only once. And so the race is on as all three factions battle and ruthlessly kill each other off in their fight for the Get Out of Hell Free card. 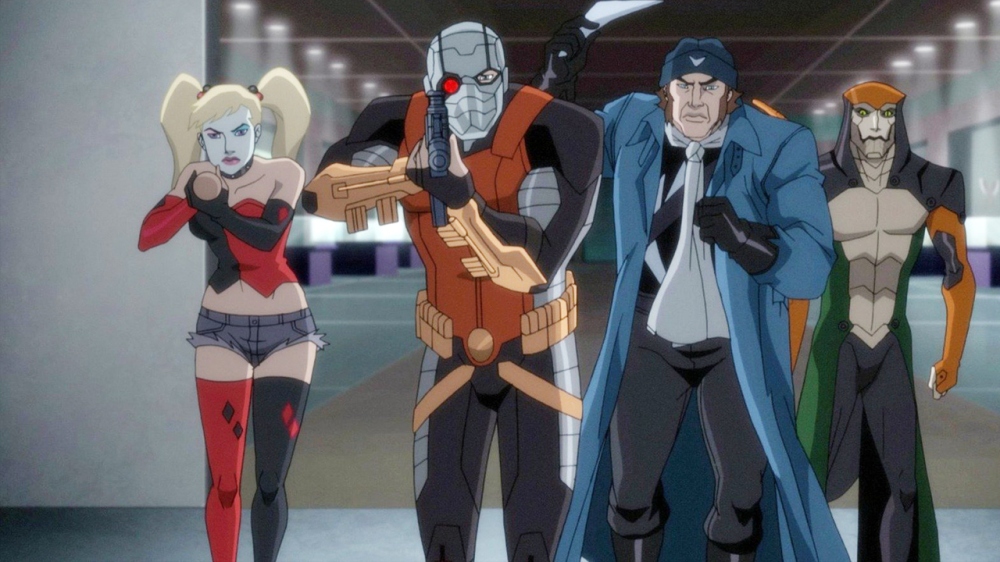 In fact, the scene where Maxum tells the squad the secret of the card is one of the funniest in the movie as he’s a male stripper and something of a real idiot. Why an all wise, all powerful Lord of Order like Nabu would trust this dunderhead with the power of Doctor Fate in the first place is baffling but hilarious and it’s the kind of goofy twist that reminded me of something Quentin Tarantino would do, as well as putting these hi-tech supervillains in a Winnebago and making the movie essentially a road trip. 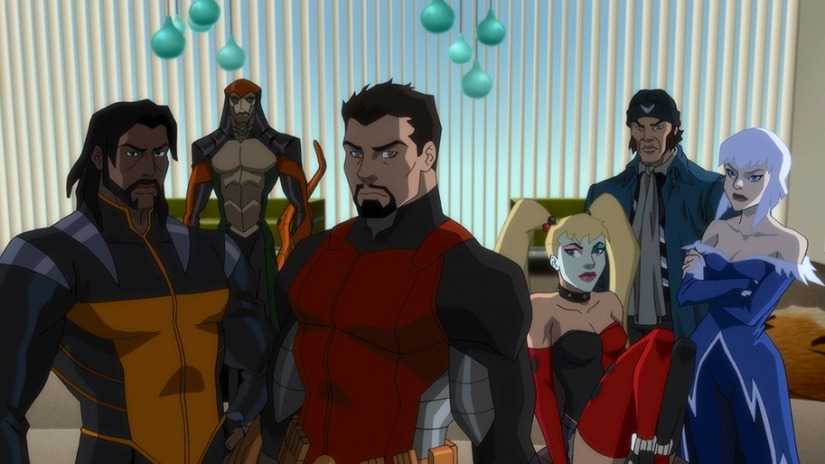 The voice work is serviceable and that’s really all I can say about it. C Thomas Howell and Christian Slater are the standouts and I really enjoyed the characterization of Deadshot in this movie better than in the live action “Suicide Squad.” Tara Strong is a let-down as Harley Quinn but let’s face it, anybody after Margot Robbie has a hard act to follow. Harley is actually toned down in this movie which really surprised me as the other characters are a whole lot closer to the comic book counterparts than they were in the live-action movie. I really didn’t care a whole lot about what happened to Amanda Waller because this skinny broad wasn’t Amanda Waller, far as I’m concerned. THIS is The Wall I know and love: 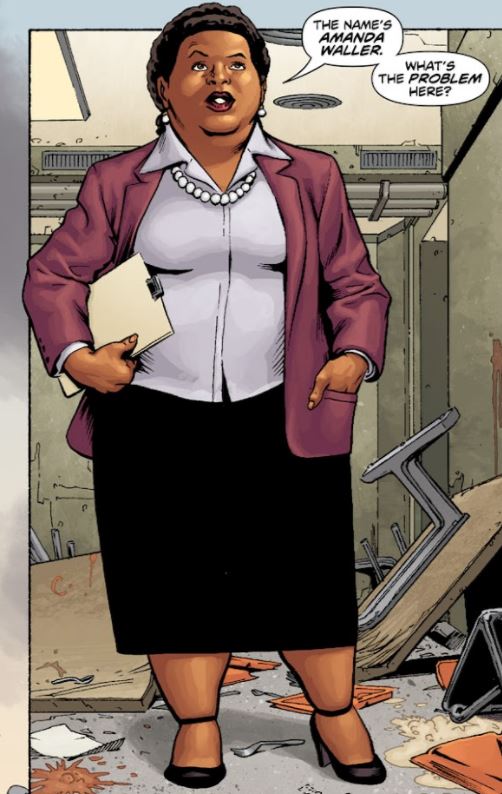 And anybody who knows me knows I love me some Amanda Waller. In fact, I trust her to stand guard on my desk when I’m not at home: 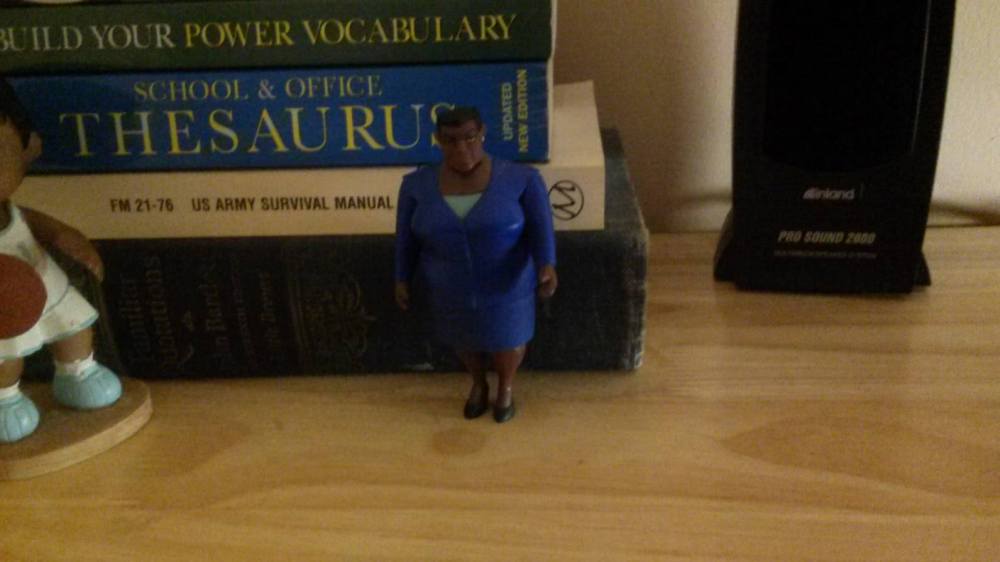 But I did care about the rest of the characters and what happened to them because of the unpredictability factor. These are characters who backstab, lie to and double-cross each other every chance they get and as a result I had absolutely no idea who was going to end up with the card and as a result the ending took me totally by surprise, which I loved. Yet, it was an ending consistent with what we learn about the characters along the way.

By all means, check out SUICIDE SQUAD: HELL TO PAY if you’re in the mood from some hard-core supervillain mayhem. But as I said earlier; be advised that this is an animated movie that pulls no punches in terms of violence, language and sexuality. It definitely is one of the most violent animated movies I’ve ever seen and just might be the most violent of The DC Animated Movies. If in some alternate Earth, Quentin Tarantino and Sam Peckinpah had ever decided to team up and make a DC Animated Movie, this is the one they’d have made, trust me.