If way back in 2001 when the first movie in the franchise “The Fast and The Furious” hit the theaters you had told me that movie would be the first in a series of (so far) eight movies and that the eighth movie would feature a better James Bond villain than most of the recent Daniel Craig James Bond movies….

And fans of the Daniel Craig/James Bond movies are right now rolling their eyes or tuning out this review. But what can I say? To a large degree, “The Fast and The Furious” movies (as well as the Tom Cruise “Mission: Impossible” series) are giving me what I used to go to James Bond movies for. Insanely over the top action sequences. Astounding fight scenes. Lush, exotic locations. Cool gadgets and gizmos. More gorgeous women than one movie should be allowed to contain. Batshit insane plots that at once seem perfectly logical yet utterly nonsensical. Colorful, larger-than-life heroes. Brilliantly deranged multi-billionaire supervillains bent on taking over or destroying the world. All this and more is in THE FATE OF THE FURIOUS, a movie that despite being the eighth installment still manages to provide something new. A lot of it is improbable and some of it I do admit, baffling (the character development and relationships between Deckard Shaw, Dominic Toretto and Luke Hobbs is something that you’re either going to just have to go with or reject as total BS) but the movie delivers on what it promises and since I’m a fan of these movies, that was good enough for me.

Hard to believe that this series started off as a knock-off of “Point Break” ain’t it? In the course of eight movies we’ve watched Dominic Toretto and his crew morph from street racing hi-jackers into a gonzo, hyperactive mash up of The IMF and The A-Team and it’s been fun to watch. This movie ups the ante considerably as Dominic Toretto (Vin Diesel) goes rogue and turns against his own team, forming an alliance with international cyberterrorist Cipher (Charlize Theron) who has a plan to become her own nuclear superpower, a rival to both the United States and Russia. 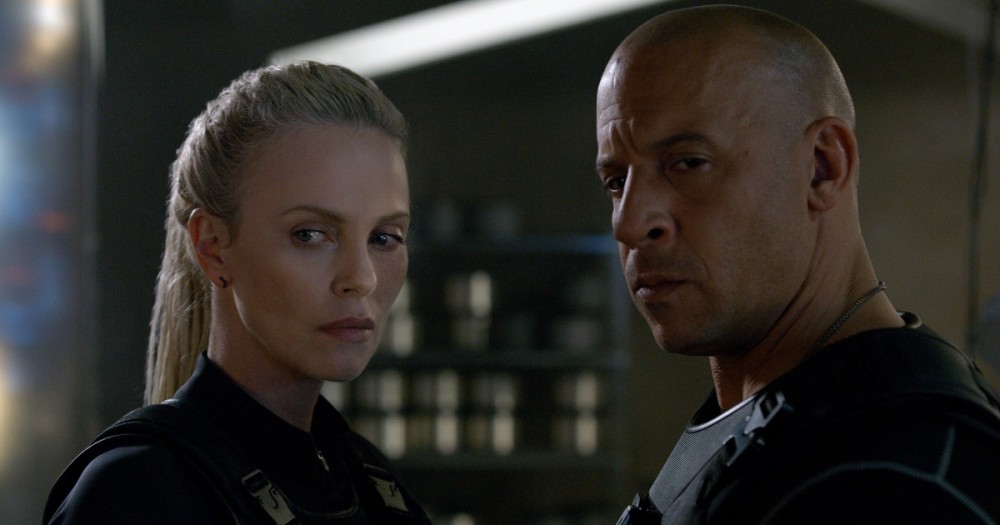 Dominic’s team is naturally baffled and mystified as to Dominic’s defection. Roman Pearce (Tyrese Gibson) thinks they should go get Brian O’Connor to help them out. Dominic’s wife Letty (Michelle Rodriguez) nixes that idea. Brian is out of the game (but it’s nice that they took a minute to acknowledge his character is happy in his retirement). The newest member of the team, hacktivist Ramsey (Nathalie Emmanuel) thinks they should give him up as a lost cause. The team’s technical expert Tej Parker (Chris ‘Ludacris’ Bridges) frankly doesn’t know what to make of the situation.

Fortunately assistance arrives in the person of Mr. Nobody (Kurt Russell) the government shadow operative and his protege Little Nobody (Scott Eastwood) who brings along Luke Hobbs (Dwayne Johnson) and Deckard Shaw (Jason Statham) to capture both Dominic and Cipher and stop her nefarious plans.

Oh, naturally it’s a little more complicated than that since you’ll remember (or maybe you don’t) that Deckard Shaw was the Big Bad of the previous movie and spent a considerable amount of the running time trying to kill Dominic and his crew. By now I’m sure you’ve heard about the controversy involving the circumstances of Shaw’s joining the crew and I think that writer Chris Morgan could have done better than to simply not address the issue at all. But since there are two more movies left to go as the current scuttlebutt says that the series will wrap up with the tenth installment I’m thinking that maybe there will be more to this.

And actually, considering that Statham steals the movie every chance he gets with such energy and humor I don’t think anybody will mind too much. His bickering back and forth with Dwayne Johnson provides much of the humor with Tyrese Gibson picking up the rest as he seems to have settled comfortably in the role of the series’ comedic relief. And Statham has a fight scene on Cipher’s flying headquarters that is among the finest of fight scenes he’s done. Seriously. It’s that jaw-droppingly good.

As for the set-pieces: there’s a race through the streets of Havana that’s a nice callback to the roots of the series. A wild sequence in New York where Cipher takes remote control of hundreds of cars in Manhattan and uses them as weapons and the insane final action sequence which finds Our Heroes in Russia, being chased across a frozen sea by a nuclear submarine, barely staying ahead of it while fighting off hoards of enemies in vehicles just as tricked out as theirs.

Some are going to say that THE FATE OF THE FURIOUS goes way too far. I’m not one of them. It’s a movie that knows exactly what it is, what it’s supposed to be and what it’s supposed to deliver. It’s not embarrassed or ashamed of what it is and director F. Gary Gray handles his cast and his movie with a sort of delirious, goofy glee as if he’s having the time of his life and wants us to join in the fun. I know I did. Highly Recommended.

4 thoughts on “The Fate of The Furious”