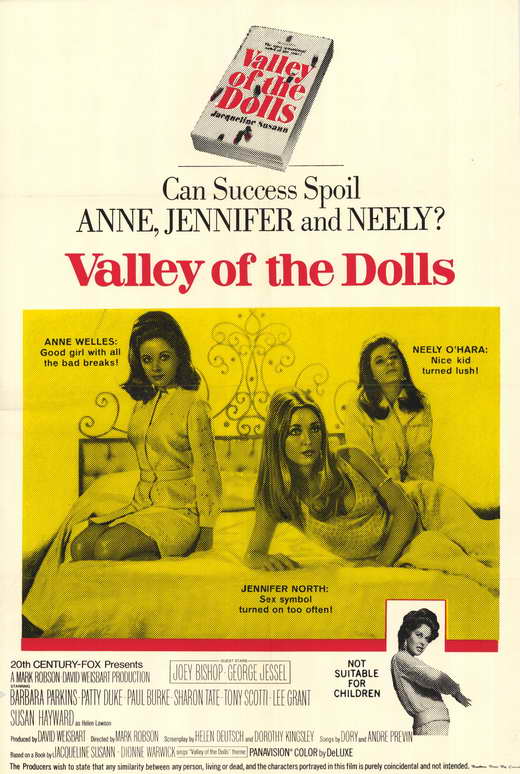 Based on the novel “Valley of The Dolls” by Jacqueline Susann

People always give me The Look when during a discussion about movies I mention that VALLEY OF THE DOLLS is one of my favorites. You know The Look. It’s the one somebody gives you when they don’t know if they should pity you or laugh at you. Usually they’ll follow up The Look with something like; “But…isn’t that a bad movie?” Well, of course it’s a bad movie. In fact, it’s trash. But it’s a hell of a good bad movie. Some of you reading this review are now nodding your head in agreement. There is entertainment value to be derived from a movie that is total trash when it’s done with enthusiasm, talent and everybody involved throws themselves into the material with total abandon. Because they know the material is trash. That doesn’t mean they can’t have fun making the movie and as a result, we have fun watching it.

And I recommend VALLEY OF THE DOLLS not only as great trash entertainment but as a cultural artifact. When it was made back in the 1960s, the Soap Opera dominated daytime television and make no mistake; VALLEY OF THE DOLLS is nothing more than a two hour Soap Opera. Our three female leads go through success, failure, romance, infidelity, drug addiction, alcoholism, insanity, abortion, medical and emotional issues and true to The Rule of Three: one dies, one goes insane and one is left alive to tell the tale.

Based on the novel by Jacqueline Susann which probably is the greatest pop culture novel ever written it tells the story of three women who pursue fame and fortune in the entertainment field:

Neely O’Hara (Patty Duke) is a pint-size earthquake of seemingly limitless talent. Put her on a stage and have an audience in front of her and there’s nothing she can’t do. She quickly makes an enemy of fading Broadway star Helen Lawson (Susan Hayward) who quickly assesses that Neely’s talent can soon make her obsolete.

Anne Wells (Barbara Parkins) is a naive New Englander who comes to New York to gain experience of the world before settling down to married life. She gets a secretarial job with a theatrical agency and is soon having a romance with Lyon Burke (Paul Burke) one of the owners/partners of the agency.

Jennifer North (Sharon Tate) is an Amazonian blonde of extraordinary beauty and a killer body. While she aspires to be an actress she is well aware she has limited talent and that she is only valued for her amazing physical beauty.

Neely, Anne and Jennifer become good friends as they navigate the ups and downs of their chosen profession. As they all move up the ladder to success, the stress of their lives compound and they all cope with them in various ways: sex, alcohol and ‘dolls’. Uppers. Downers. Pills that is. Dolls to get you up in the morning. Dolls to keep you going through the day. Dolls to put you to sleep at night. And then you get up again the next day and the whole thing just keeps going and going and going.

At its core, VALLEY OF THE DOLLS is a Be Careful Of What You Wish For fairy tale for grown-ups. The three women think they know what they want out of life and go after it but once they have it they’re profoundly unhappy and dream of a simpler life where they can find true love and happiness. But for two of them they’re on a downward elevator to despair, madness and death with no Up button to press.

But enough of the doom and gloom. VALLEY OF THE DOLLS is indeed a lot of fun to watch simply as a cultural artifact of a style of movie and movie making that isn’t done anymore. Patty Duke and Sharon Tate share the MVP honors for this one. You watch Sharon Tate in this one and I defy you not to have a twinge of sadness for what might have been. I’ve always maintained that had she lived, Sharon Tate could very well have been like Jessica Lange who nobody took seriously as an actress when she first started out. There’s a real poignancy and pathos to Tate’s performance here and out of all the three lead characters, hers was the one I really felt for. 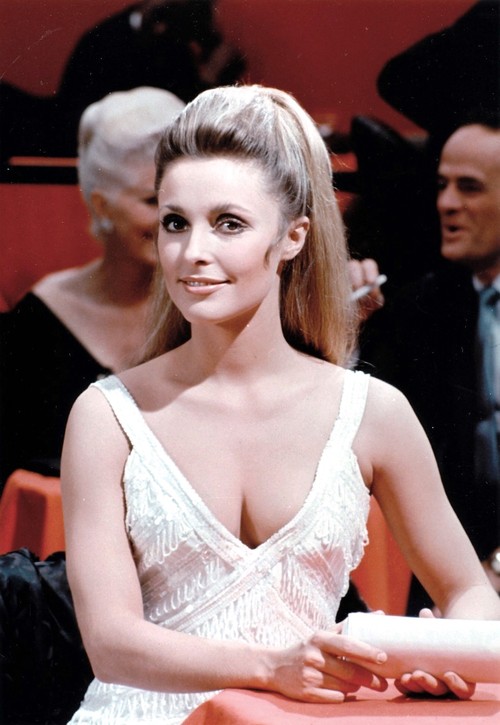 Patty Duke is obviously having a ball playing Neely O’Hara who starts out as a truly sweet, talented kid full of hopes and dreams and transforms into an egotistical monster. Barbara Perkins (who also starred in the primetime television Soap Opera “Peyton Place”) is a gorgeous woman but for my taste is bland and flat. She’s not very emotional in her dramatic scenes and it’s difficult for me to believe she can inspire any man to fall madly in love with her.

Not that the men in this movie come off as shining examples of manhood either. Most of them are in this movie simply as background. They only have one purpose far as I could tell; to keep the story moving along. But that’s okay because this movie is about the women; their dreams, their ambitions, their careers. The movie firmly keeps the focus on them where it’s supposed to be.

So should you see VALLEY OF THE DOLLS? Yes. It’s Great Good Trash that should be watched and enjoyed in that spirit. It’s the great-grandmother of “Showgirls” and in fact, the two of them would make a great Saturday night double feature with friends, pizza and drinks. Enjoy.

2 thoughts on “Valley Of The Dolls”