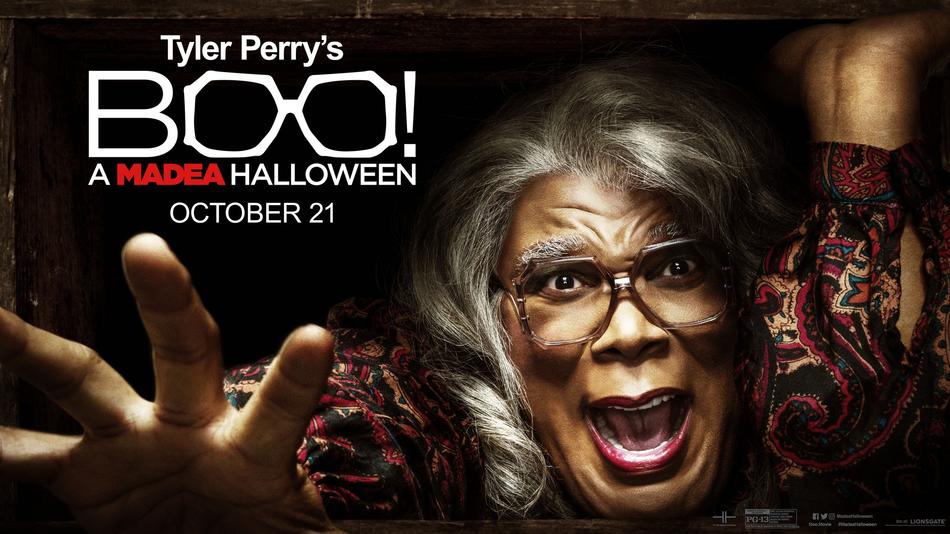 There’s some words and phrases you’ll never hear me use because I believe that either they’ve been so overused that they no longer have any true meaning or I just despise what they imply. ‘Guilty Pleasure’ is one of those phrases and it make me want to scream when I hear/read somebody use it. I see absolutely no reason at all to be ashamed of what you like to read, watch or listen to. Unless it’s child pornography. That’s a whole ‘nother subject best left for another time. The point I’m trying to make here is that I don’t believe in ‘Guilty Pleasures.” I like what I like and if you don’t like that I like what I like then that’s your little red wagon to pull.

I say that to say this; there’s some’a you black folks who are right now rolling your eyes upon seeing that I’m reviewing BOO! A MADEA HALLOWEEN and saying to yourself; “How could he go see that movie?” You have my permission to skip this review.

So why did I go see BOO! A MADEA HALLOWEEN? Simple. I like comedies and I like to laugh. And whatever else you may think of Tyler Perry’s Madea movies, they are funny as hell. And I’m of the mindset that true racial equality will never achieved unless black filmmakers can make comedies just as brain-dead stupid (and I mean that in a good way) as white filmmakers. And make no mistake, BOO! A MADEA HALLOWEEN is simple, silly, brain-dead stupid entertainment. It also made my sides sore from laughing so hard and that is all I ask and require from a comedy: that it makes me laugh. Brian Simmons (Tyler Perry) is at his wits end when it comes to dealing with his openly disrespectful and rebellious daughter Tiffany (Diamond White) Despite being underage, she’s made plans to sneak out of the house along with her friends Rain, Leah and Aday (Liza Koshy) to go hang out at the local frat house’s annual Halloween party. Brian has to go out of town for the weekend and in desperation (and because he doesn’t want his ex-wife to know he sucks at being an authority figure) he calls his aunt Madea (Tyler Perry) to come look after her. 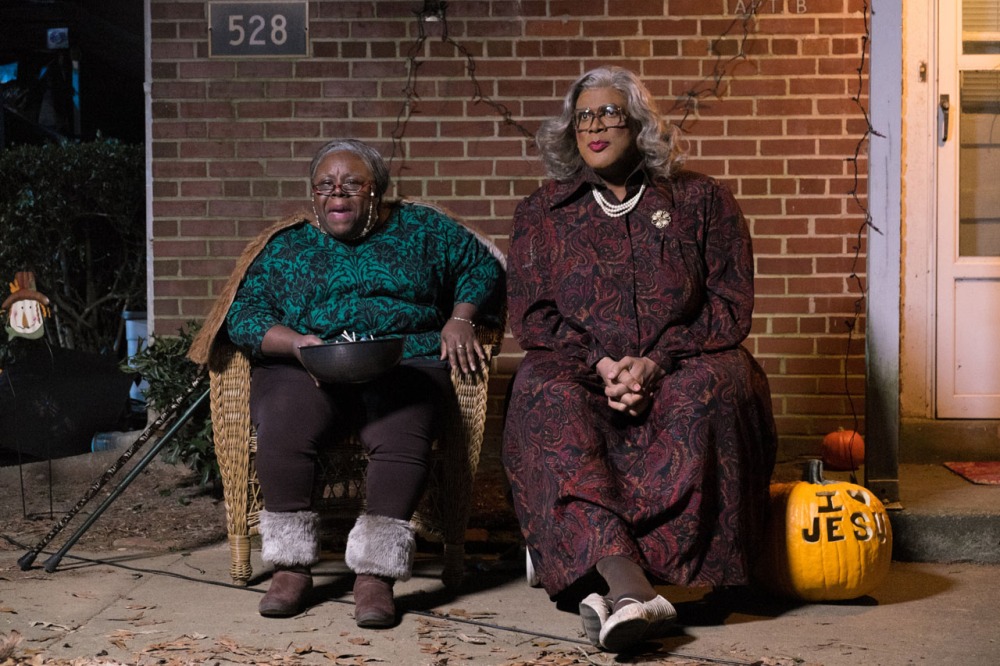 Madea really doesn’t appreciate being called away from her favorite Halloween past time; mocking the costumes of the neighborhood kids while her cousin/ best friend Bam (Cassi Davis) is busy stealing their trick-or-treat candy. But once Brian dangles the promise of pay in front of her, Madea agrees to take the job. Not only does she bring Bam along but for reasons I’m still not clear on but didn’t care about she brings along Brian’s father/her brother Joe Simmons (Tyler Perry) and Hattie (Patrice Lovely) another one of her friends who despite her advanced age demonstrates many times during the movie that she is…ahem…young at heart, let’s say. 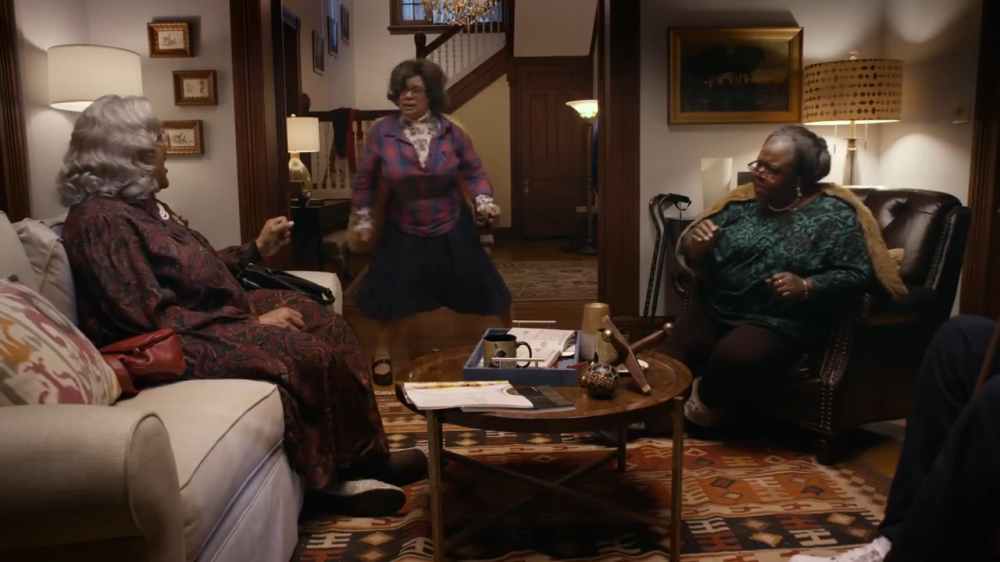 Tiffany manages to sneak out to the party after unsuccessfully trying to scare Madea and her crew with some off the wall story about a Mr. Wilson who supposedly murdered his entire family in the house. (don’t worry, this factors in later on the plot when Madea and the others think that Mr. Wilson has come back from the dead to murder them) This leaves Madea, Bam and Hattie no choice but to go to the frat party themselves to recover the wayward child. Joe ain’t going nowhere. He got himself a phat J to smoke. Now, you might think that the funniest stuff in the movie happens at the frat party and while there are some mild laughs to be had, the real belly busters come later on in the movie when Madea and her cronies believe that there are supernatural entities trying to kill them. 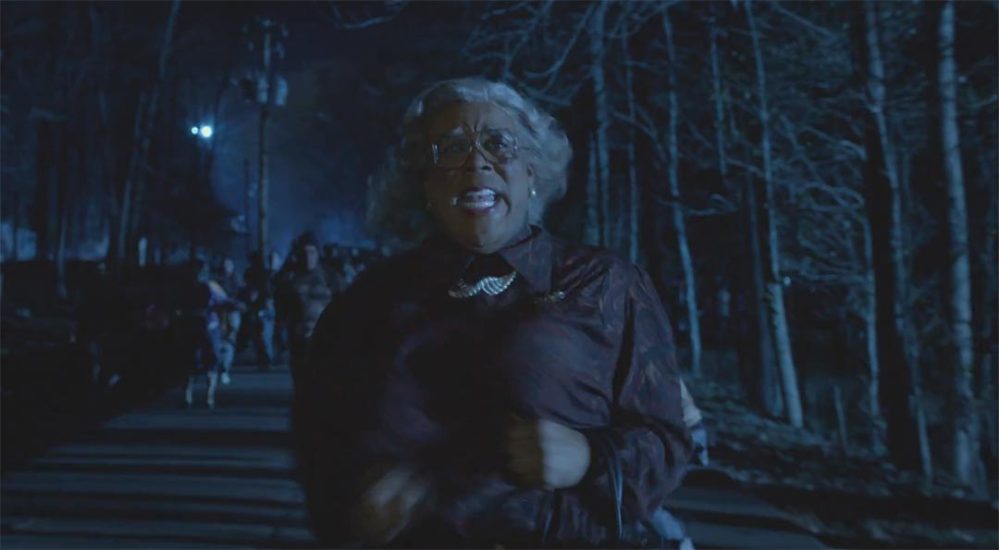 In between the comedy we get dialog between the characters that I feel is actually Tyler Perry’s editorializing on modern day parenting vs. old school. Madea and Joe openly scoff and deride Brian’s method of being a friend to his child, asserting that their way of rearing children (throwing them off the roof and beating them so badly they have to go to the hospital) is what made their kids the strong and responsible adults they are today. There’s also a scene near the end that grabs us by the neck and yanks us thoroughly out of the comedy and into the drama but being familiar with Perry’s style of making movies I wasn’t as bothered by it as I would be if this had been written and directed by somebody else. You go into a Tyler Perry movie knowing full well what you’re getting and it’s no sense in going to see BOO! A MADEA HALLOWEEN and then complaining that it’s not a sensitive, intelligent, spiritually uplifting examination of modern African-American life. That’s like going into McDonald’s, ordering filet mignon then pitching a boogie woogie when they tell you they don’t serve that. 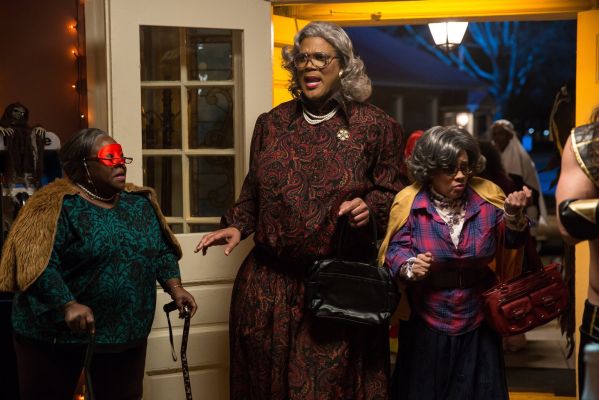 By now, Tyler Perry as Madea can make us laugh without breaking a sweat. Unlike most Madea movies where she’s almost a supporting character in her own movies, she’s front and center from start to finish. But this is more of a family friendly Madea than we’ve seen. In the early movies Madea was a far more thuggish character, prone to snap at any minute and resort to abusive language and physical violence to make her point and if that didn’t work she had no issue with pulling out her Glock to bust a cap in yo’ ass. And while I usually am bored to death with actors playing multiple roles in the same movie it worked here for me because Tyler Perry is actually playing three separate, distinct characters with their own individual body language, way of talking and point of view. Now, don’t get me wrong. I’m not saying he’s Laurence Olivier but he does a much better job of playing multiple roles in the same scene than most others I’ve seen. 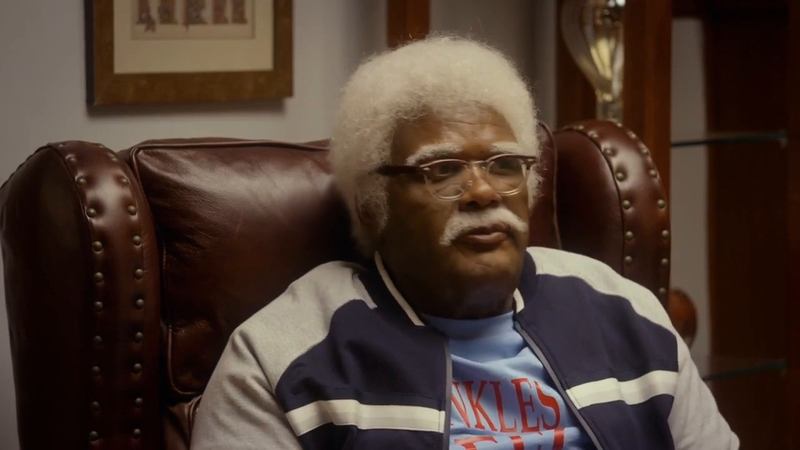 So should you see BOO! A MADEA HALLOWEEN ? Only if you want to take a break from all the crap that’s going on in the world today, sit back for 103 minutes and laugh. It’s not High Art, it’s not made to win awards at Oscar time and it certainly will never be included in The National Film Registry. But it is a sincere and honest effort to entertain and on that level it succeeds. Go see and enjoy.

5 thoughts on “Boo! A Madea Halloween”