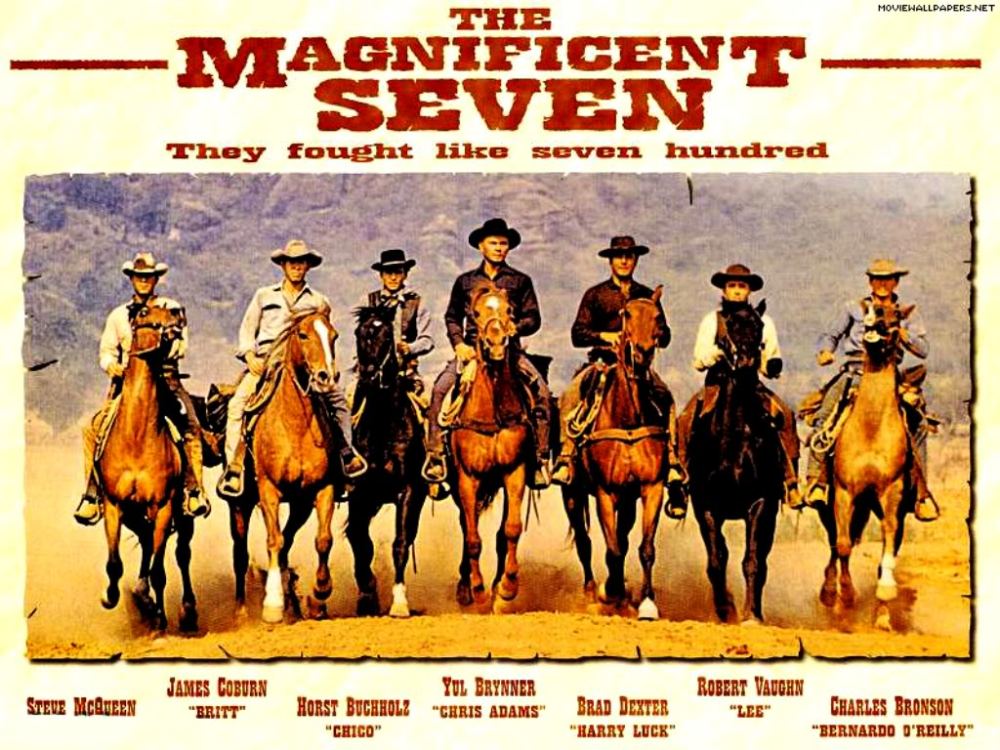 Produced and Directed by John Sturges

Based on “Seven Samurai” directed by Akira Kurosawa

Much as I love the Internet I’m glad I grew up during a time when we didn’t have it. Because back then when I saw a movie either on television or in the theater I had to take that movie on its own terms and for what it was. I was familiar with THE MAGNIFICENT SEVEN due to it being shown fairly often on TV. It was one of the movies I watched with my father every time it came on. This was in the days even before VHS (I heard that scream of anguished disbelief from the back. You okay?) so if you missed a movie you had to wait quite a while before it was shown again. I didn’t know that THE MAGNIFICENT SEVEN was a remake of “Seven Samurai” until the 1980s when I caught it on PBS late one Saturday night. Intrigued by the similarity of the two movies I went to my local library, found some movie reference books and looked it up and became aware of the movie’s history.

See what we had to go through to get information before Google?

A small Mexican village is being terrorized by a gang of banditos led by Calvera (Eli Wallach) who is having problems finding food and supplies for his men. He’s looted this particular village so often and for so much that the village leaders have finally decided they’re sick of his shit and they’re not going to take it anymore. They collect all the sellable goods in the village and ride across the border to the United States, looking to hire gunslingers to show them how to fight and drive off Calvera and his gang. They meet up with Chris Adams, a gunfighter who dresses all in black and explain their dilemma to him. They offer him their goods as everything they have in the world and touched by the naked honesty of these simple men, delivers one of the best lines in a movie stuffed full of great lines: “I’ve been offered a lot for my work. But never everything.”

Chris recruits six gunslingers: Vin Tanner (Steve McQueen) who would rather take a chance on getting killed defending the village than become a store clerk. Bernardo O’Reilly (Charles Bronson) once commanded thousands of dollars for his professional skills but has fallen on hard times. Lee (Robert Vaughn) is on the run from the law and a change of country for a time would do him good. Harry Luck (Brad Dexter) is an old friend of Chris and goes along as he’s convinced that the villagers must be hiding a gold or silver mine from Calvera and Harry wants to cut in. The enigmatic, laconic Britt (James Coburn) is the absolute best with a gun or knife and always looking for new challenges to test his lethal skills. Chico (Horst Buchholz) is a hot tempered young gun, looking to make a name for himself fast and hard.

The Seven go to the village. The plan is that even though they’re outnumbered, once Calvera sees he’s up against professional gunmen he’ll move along to other towns where the pickings will be easier. The first skirmish against Calvera goes to The Seven but Calvera has no intention of leaving it at that. And that leads to an apocalyptic showdown in which not all of The Magnificent Seven or their allies will survive.

Simply put; THE MAGNIFICENT SEVEN is one of the greatest westerns ever made and certainly one of the best known. A large part of this is due to the bold, brassy, heroic music score by Elmer Bernstein. Even people who have never seen the movie know the music. And I myself know people who hate westerns but they’ve seen THE MAGNIFICENT SEVEN. It’s just one of those movies that everybody seems to have seen at one time or another in their life.

We look at the cast and marvel at the star power but at the time the movie was made the only ones who were bona fide movie stars were Yul Brynner and Eli Wallach. Everybody else was mostly doing television work and just getting their feet wet in movies. They make for an eccentric, entertaining team. I’ve always suspected that James Coburn actually watched “Seven Samurai” as his characterization of Britt is to play him more or less as a samurai in the Wild West. Horst Buchholz and Brad Dexter are the two member of The Seven whose names nobody ever remembers and they both never had anywhere as good a role as they have in this movie. Yul Brynner’s look and performance here became so iconic that he reprised it in a science fiction movie; “Westworld.” And in the 2016 remake, Denzel Washington’s character dresses all in black, no doubt in homage to Brynner.

Steve McQueen makes for a more than capable second-in-command and he provides some nice bits of humor with his folksy parables he pulls out when he’s trying to make a point and he gets to say the line that sums up the mission statement of The Magnificent Seven quite succinctly: “We deal in lead, friend.” Charles Bronson, of all people gets to have an emotional subplot where he’s adopted by a trio of village kids who promise to put fresh flowers on his grave everyday if he gets killed. Robert Vaughn’s performance is stylishly laid back, suggesting with his mannerisms that his character is wrestling with various neuroses.

I don’t have to give you the hard sell on the 1960 version of THE MAGNIFICENT SEVEN. If you haven’t seen it by now then you apparently have no interest in it and nothing I can say will change your mind. Those of you who have seen it were probably nodding your head in agreement while you read this review. Plain and simple; THE MAGNIFICENT SEVEN is indeed a magnificent movie with an equally magnificent story and cast and has long earned its reputation as a true classic of the Western genre.