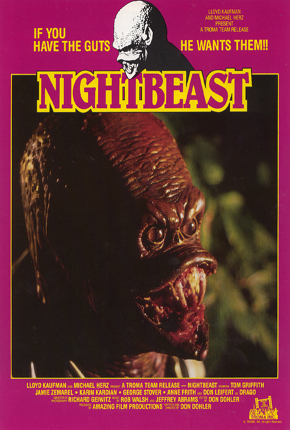 Written and Directed by Don Dohler

I know that it must get annoying for younger movie fans to listen to us old geezers go on and on and on about the movies of the 1980s. To hear us tell it, the 1980s was a magical, inspired decade of brilliant filmmaking that we’ll never see again. And truth to tell we did have some exceptionally kick-ass movies come out of the 1980s. “Once Upon A Time In America” “Ghostbusters” “Die Hard” “Back To the Future” “The Princess Bride” “Predator” “Airplane!” “The Shining” “The Outsiders” “The Empire Strikes Back” “Lethal Weapon” “Raiders of The Lost Ark.” And that’s just the tippity-top of a very big iceberg. No doubt about it, the 1980s was a great decade for movies.

But with bitter waters must come with the sweet and the truth is this: that for every great movie that hit the cinemas, there were at least three or four utter crappy movies that somehow crawled onto the movie screens with no warning at all. Which brings us to NIGHTBEAST.

An alien starship passing by Earth is struck by an asteroid and crash-lands on the outskirts of the small town of Perry Hall, Maryland. The pilot survives, a monstrous, hideous looking sucka sporting a snappy, pristine silver jumpsuit. And an honest-to-Buck Rogers disintegrator ray gun that it promptly uses to disintegrate a couple of hunters who were camping nearby and came to investigate the crash.

And the alien doesn’t stop there. He promptly commits a home invasion, killing the couple within. He kills an uncle taking his niece and nephew out for a drive. And what kind of uncle just happens to be driving way the hell out the country with his niece and nephew in the middle of the night, hmm? And the alien still doesn’t stop there. He continues to disintegrate everybody he comes across. Even after his ray gun is destroyed he continues his bloody rampage, disemboweling, ripping heads off, snapping necks and in general just carrying on cranky. Why? Don’t ask me. Never once does the movie explain why the alien goes berserk. Presumably it’s intelligent since it knows how to operate a starship; it’s wearing clean clothes and packs a gat. But the alien never even tries to make contact or ask for help. It just runs around killing everything that moves.

After an encounter with the alien that leaves more people dead, Country Sheriff Jack Cinder (Tom Griffith) decides to evacuate the entire town until The National Guard can be called in to help. This doesn’t sit very well with Mayor Bert Wicker (Richard Dyszel) who apparently went to the same school of mayoring as Larry Vaughn from “Jaws.” Wicker is throwing a lavish party for the governor in order to further his own political career and he doesn’t need Cinder running around screaming that there’s an alien in town disintegrating everybody in sight. It’s up to Cinder, his loyal deputy Lisa (Karin Kardian) and Jamie (Jamie Zemarel) to stop the blood-soaked frenzy of the alien. Who’s Jamie? Don’t ask me. He’s a guy who just shows up and he’s plainly more capable than anyone else in the movie of dealing with the situation. My favorite scene in the movie is when Cinder interrupts the mayor’s party and tries to reason with him to get the governor out of town before the alien drops by for drinks. Jamie coolly takes Lisa’s gun, fires a couple of shots for attention and then tells everybody there’s a dangerous gas leak and they need to get the hell out. He then calmly steps out of the way of the stampede.

Other than the scenes with Jamie (and some welcome gratuitous nudity courtesy of Karin Kardian and Monica Neff who plays Suzie, the girlfriend of the town rapist, Drago (Don Leifert) there’s not much else I can recommend about NIGHTBEAST. It may interest you that this movie boasts the first official screen credit of J.J. Abrams (as Jeffrey Abrams) so there’s that.

The movie was filmed on a budget of $42,000 and I’m surprised they spent that much. The special effects are painfully bad but the special effects guys do go all out on the gore when the alien attacks. But I have to give the cast credit for being professionals. They give it their best and never once wink at the camera or treat the material as anything less than serious. I only wish they had a better script to work with. And that’s really all NIGHTBEAST needed to be a better movie. While I was watching it, I was mentally rewriting the story in my head which I usually do when the movie is really bad or really stupid. But don’t get me wrong. It’s not a totally worthless movie. It’s the kind of movie that’s made for when you’re having a drinking party and you and your guests need to have something to goof on while you’re getting blitzed. NIGHTBEAST is just that kind of movie. And you don’t even have to pay to see it. It’s available on YouTube and I’ve even been so good as to provide a link if you want to see how bad it is for yourself. Enjoy.