You guys know that I’ve never held myself up to be any kind of expert on film. I’ve never been to film school or taken any formal courses so when I lay out my idea to you on why I think the Marvel Cinematic Universe movies are so successful, it’s just me rattling on. Trust me, I don’t have the formula for how to make a successful motion picture and if I did I would be right now in my Beverly Hills mansion floating in a Tony Montana-sized platinum bathtub filled with champagne.

But here’s what I think. The Marvel movies are so good and so successful because they’re not just superhero movies. The “Iron Man” movies are not just superhero movies but techno-thrillers as well. The first “Captain America” was a war movie as well as a superhero movie while the second doubled as a political thriller. The “Thor” movies successfully blend heroic fantasy with the superheroics while “Guardians of The Galaxy” works as a straight space opera. I think you see where I’m going with this. ANT-MAN isn’t just a superhero movie; it’s also a pretty nifty heist flick. It also gives us a bonus in that it’s the first Marvel movie where we see one superhero pass on his name, powers and legacy to another. I’m a sucker for that kind of ‘passing the torch’ generational thing and it’s one of the more enjoyable aspects of ANT-MAN

Cat burglar Scott Lang (Paul Rudd) is released from prison and the first thing he informs his old cellmate/new roommate Luis (Michael Pena) is that he’s going straight. After all, he’s got a degree in electrical engineering so getting a good paying job should be a snap, right? Wrong. And without a job and apartment of his own, Scott’s ex-wife Maggie (Judy Greer) won’t allow visitation rights so that Scott can spend time with his daughter Cassie (Abby Ryder Fortson) who worships her father. Maggie’s police detective boyfriend Paxton (Bobby Cannavale) is just itching for the chance to throw Scott back in jail.

And he may get his chance when Scott, disgusted with his failed efforts to hold down a job, agrees to hook up with Luis and his crew (Tip “T.I.” Harris and David Dastmalchian) for what Luis swears is a lucrative burglary that will make them all rich. The burglary is indeed an easy one but all Scott comes away with what he thinks is a funky looking old motorcycle suit.

Intrigued by the circuitry and hi-tech elements of the helmet and suit, Scott tries it on, fools around with the controls and shrinks himself down to size of an insect. Scott is contacted by the owner of the suit, Dr. Hank Pym (Michael Douglas) the Original Ant-Man who now needs Scott to become the new Ant-Man in order to keep his shrinking technology from being used by Darren Cross (Corey Stoll) his former protégé. Cross has taken over Hank’s company and weaponized the Ant-Man technology, creating The Yellowjacket, a military battle suit. With the help of Hank’s daughter Hope Van Dyne (Evangeline Lilly) who is a senior board member of Pym Technologies and trusted by Cross, Hank wants Scott to sabotage The Yellowjacket. 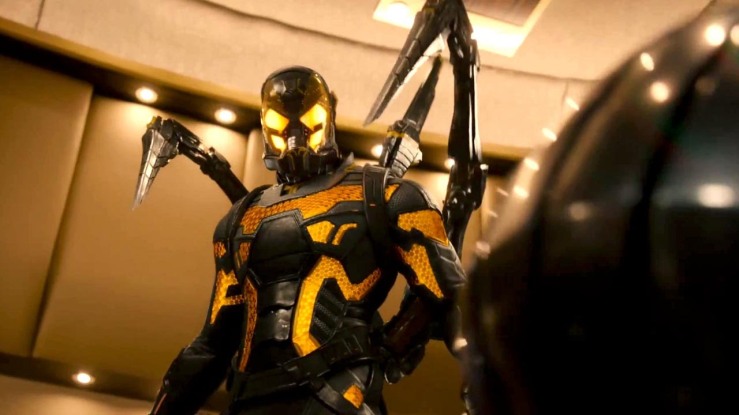 I won’t keep you in suspense: I loved ANT-MAN. I’ve been a big fan of the character of Dr. Hank Pym ever since I was a kid. You can keep your super-strength and flight and magic spells. If I had my choice of superpowers, size changing is in my top five. It’s a delight to see Hank Pym brought to life by Michael Douglas who anchors this whole thing and give it gravitas. I defy any other actor to deliver a line like “I want you to be the new Ant-Man” the way Douglas does. He’s having fun at the same time he’s being totally serious. It’s a fine line to walk and he does it exquisitely. He has terrific chemistry with Evangeline Lilly and it’s really nice to see the movie’s script gives them time to work through their issues during the mayhem.

Paul Rudd did a far better job than I thought he was going to do and by the time we get to that to wonderfully badass scene of Ant-Man leading his squadron of flying ants into battle, he had me. Like the other MCU movies, ANT-MAN isn’t afraid to embrace the goofy ridiculousness of the situation and it doesn’t shy away from recognizing how silly the notion is of a guy whose superpower is being able to shrink to insect size and talk to ants. But at the same time, in highly imaginative ways it’s demonstrated how dangerous and powerful such abilities can be.

The only problem I have with ANT-MAN? The plot borrows heavily from the first “Iron Man” movie what with Corey Stoll playing an Obadiah Stane Lite. But Stoll is such a good actor and like everybody else here, he’s obviously having a good time I let it go. Marvel continues its winning streak of superhero movies that are pure undiluted FUN and keeps on giving me what I want: astonishing tales of superheroes who relish being superheroes and get a kick out of having amazing adventures. If you haven’t seen ANT-MAN yet, stop waiting and go.