You know what SAN ANDREAS needed to be a real, Honest-To-Irwin-Allen Disaster Movie? Director Brad Peyton needed to have rounded up a dozen aging character actors from the 1980s and sprinkle them in his movie in various roles so that we in the audience could have the fun of guessing which ones were going to die and which ones would be around for the closing credits. Because that’s how those classic Disaster Movies of the 1970s were sold: “Who will live and who will die?” the posters asked. And that was part of the fun of going to see a Disaster Movie back then.

SAN ANDREAS chooses to focus on one family as they struggle to survive the largest earthquake in human history: a 9.6 that rips California apart and obliterates entire cities. It’s a narrow focus, yes, but the real stars of the movie aren’t Dwayne Johnson and Carla Gugino, good as they are. The stars of SAN ANDREAS is the special effects department and it goes absolutely batshit insane destroying Los Angeles and San Francisco. Even for a long time movie goer like me who has seen plenty of destruction on screen, the apocalypse depicted in SAN ANDREAS is magnificently outrageous. And that’s the fun of going to see a Disaster Movie now. Because we’ve got the special effects that Irwin Allen would have sold his soul for back in the heyday of the Disaster Movie.

Caltech seismologist Dr. Lawrence Hayes (Paul Giamatti) had predicted the quake but in true Chicken Little fashion, nobody believed him when he said the sky was falling. But with the help of plucky news reporter Serena Johnson (Archie Panjabi) they believe him when he says that this is just the beginning. Things are going to get a whole lot worse and in his expert opinion, everybody in San Francisco needs to start running as if their asses are on fire NOW and not stop until they hit Canada.

The quake hits Los Angeles and Ray is able to save Emma using his chopper. They then set out to fly to San Francisco and hopefully get there ahead of the quake and save their daughter. 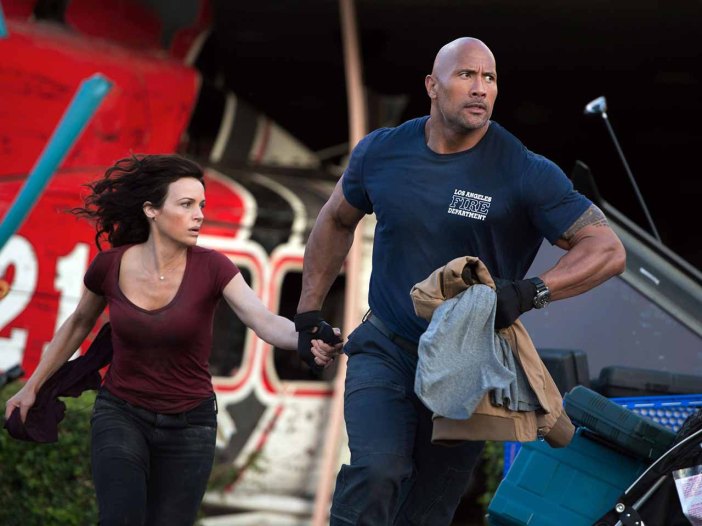 And that’s all you need to know. SAN ANDREAS knows what you’ve come for. You want to see skyscrapers tumbling into rubble, famous landmarks blowing up, cities engulfed in tsunamis, women clutching their children to their breasts as they run screaming down the street, men stampeding like blood-mad bulls and everybody pretty much hollering “Oh, shit!” non-stop as they all try to stay alive while California slides into the sea.

Director Brad Peyton and screenwriter Carlton Cuse have no pretense that they’re making art here and stars Dwayne Johnson and Carla Gugino don’t for a minute try for Academy Awards. But they do understand the genre they’re working in and conduct themselves accordingly. Both Johnson and Gugino are always wonderful to watch on screen and they acquit themselves well here. Between dodging collapsing buildings and explosions they rebuild their damaged relationship, providing moments where their characters and the audience as well can catch a breather until the next crisis must be overcome.

Paul Giamatti and Archie Panjabi are also fun to watch as they work their side of the street warning the hapless citizens that they have to run for their mollyfoggin’ lives NOW. I liked how Paul Giamatt’s Dr. Hayes gets to have his Action Hero moment during the destruction of the Hoover Dam (a truly frightening sequence) where he’s getting tourists off the dam as its falling to pieces. 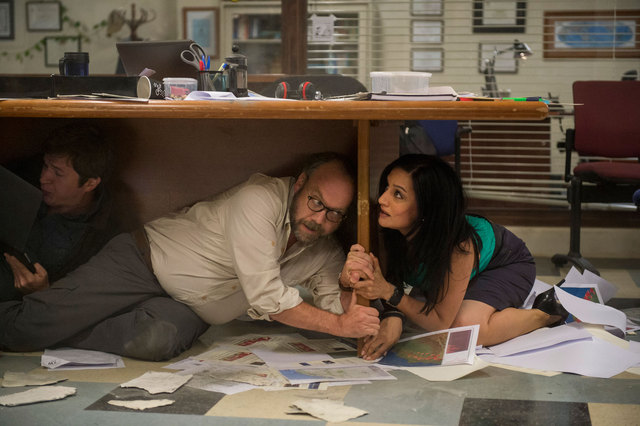 I first saw SAN ANDREAS in 3D and while I normally avoid 3D like the plague, I couldn’t get out of it as my wife Patricia insisted on seeing it in 3D. She’s very good about going to see movies with me she has no interest in so I couldn’t be a swine and refuse her. And you know what? It wasn’t bad at all. In fact, I enjoyed watching it in 3D way more than I thought I would. The 3D was especially good later on during the scenes in a drowned San Francisco that are utterly and totally surreal. And yes, I definitely did appreciate the 3D in the scenes where Carla Gugino is running.

So should you see SAN ANDREAS? Yes. No matter when you see it, at its heart and soul its a total Summer Movie. It’s all spectacle, all massive action set pieces and enormously outrageous stunts and special effects. It has no pretensions and no desire to do nothing else that make you forget your troubles and entertain you for 114 minutes. And it does it with strong actors and a simple, direct story that has just enough characterizations and genuine emotion to get you invested in the characters. Enjoy.