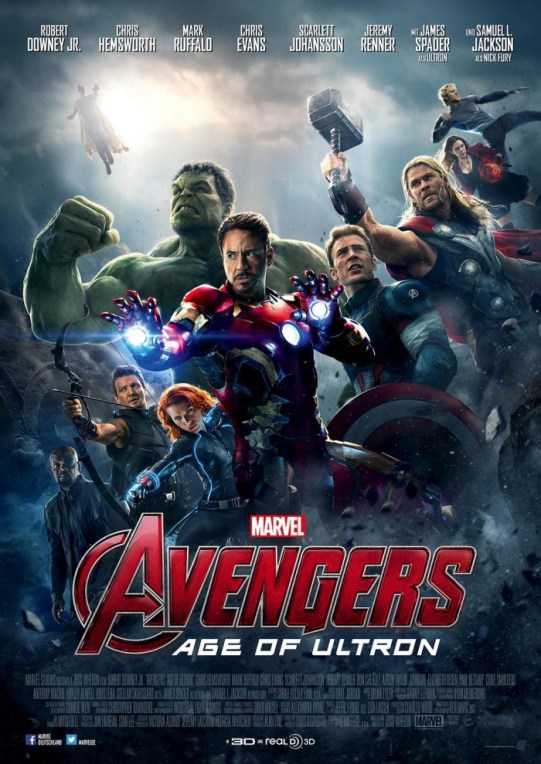 Written and Directed by Joss Whedon

Based on “The Avengers” created by Stan Lee and Jack Kirby

The best recommendation I think I can give AVENGERS: AGE OF ULTRON is that by the time the final credits were through rolling, my face hurt. But it was a good hurt. I’m being totally honest with you when I say that for about 85% of the movie I had the biggest grin on my face. The times I didn’t were during the appropriate and genuine moments of emotional crises suffered by the heroes. And those were welcome and necessary moments. Because Joss Whedon gets The Avengers. And he knows that without those scenes where they bicker, fight and squabble like a family, we won’t give a damn when they assemble to go into battle to save the world.

And this time around, saving the world has a personal angle to it as Tony Stark/Iron Man (Robert Downey, Jr.) is responsible for the menace threatening it. Yep, Tony’s been playing Dr. Frankenstein and has created an artificial intelligence named Ultron. Working in conjuction with Doc Bruce Banner/The Hulk (Mark Ruffalo) Tony designed Ultron (James Spader) to be a worldwide defense program. It’s obvious to the rest of the team: Steve Rogers/Captain America (Chris Evans) Thor (Chris Hemsworth) The Black Widow (Scarlett Johansson) and Clint Barton/Hawkeye (Jeremy Renner) that Tony is still feeling the PTS of the Chitauri Invasion of New York. It could well be that his manic desire to protect The Earth from future invasions may be clouding his judgment just a wee bit. 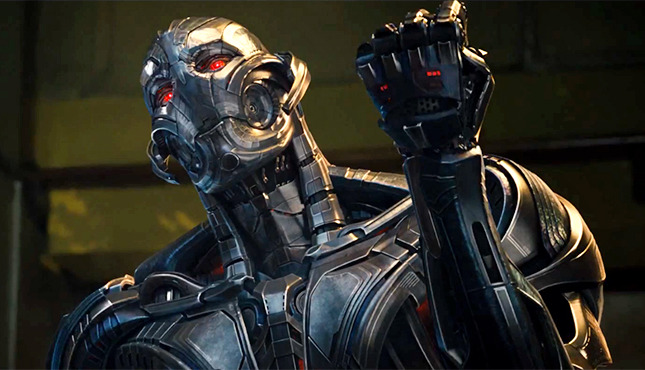 Such an understatement. Ultron achieves sentience and sets out on his own agenda to save The Earth. An agenda he feels that can only be accomplished by eradicating humanity. Ultron recruits two “enhanced humans” to his cause. The twins Pietro Maximoff/Quicksilver (Aaron Taylor-Johnson) and Wanda Maximoff/The Scarlet Witch (Elizabeth Olsen). Formerly experimental subjects of Baron Wolfgang von Strucker (Thomas Kretschmann) they eagerly join with Ultron for reasons of their own that concern Tony Stark.

That’s the bare bones of the plot and that’s really all you need to know. AVENGERS: AGE OF ULTRON is so much fun because it’s exactly what I look for in a superhero movie and Joss Whedon knows how to make one, that’s for sure. The action sequences are nothing less than spectacular and even though they’re extremely busy, it’s always very clear which Avenger is doing what and why. I especially liked the different and inventive ways Whedon came up with for Captain America and Thor to work together using their signature weapons of shield and hammer. Each and every one of the fight scenes is big enough to have easily been the conclusion of any other superhero movie. Trust me on this. Right from the raid on Strucker’s Hydra base that starts the movie, Whedon cranks it up to eleven and keeps it there for the entire running time.

But it’s not all wall to wall action. Whedon knows how to slow down the action to allow the human, emotional moments to take over and they’re just as suspenseful as the action sequences and in some cases, a complete and total surprise. There are revelations concerning Hawkeye, the Black Widow and The Hulk that I really didn’t see coming. And in the case of Hawkeye, those of you who like me, complained that he didn’t have enough to do in “The Avengers” will be delighted to hear that he gets more than enough to do this time around.

James Spader as Ultron does some interesting things with his characterization that has subtle echoes of Downey’s characterization of Tony Stark which only makes sense to me. Chris Evans can no longer be billed: Chris Evans as Captain America. From now on he gets billed: Chris Evans is Captain America. While he still is presented as a man out of time, it’s his values and morals from that time that always gives the team its drive and sense of purpose. It provides a nice balance to Tony Stark’s Australia-sized ego and single-minded focus on what he thinks his best for the world.

As the new kids, Aaron Taylor-Johnson and Elizabeth Olsen hold their own with the more experienced ensemble cast and carry their roles admirably. I really enjoyed Taylor-Johnson as Quicksilver and preferred him to the Quicksilver in the “Days of Future Past” X-Men movie. That version was too frivolous and smart-alecky for my taste while Taylor-Johnson had the intensity and pissed-off attitude I like in my Pietro.

It’s a big, complicated story with a lot of characters and a lot of cameos featuring faces you’ll recognize from the standalone movies featuring Thor, Iron Man and Captain America but you’ll never be lost or feel like the story doesn’t once know where it’s going. And the best thing about it is that it’s a superhero movie that makes you feel good. The Avengers never lose sight of the fact that they’re supposed to be the good guys and even when they stumble, they pick themselves up and jump right back into the fray. It’s downright refreshing to see superheroes who worry first about getting civilians out of harm’s way before going into combat with the bad guy (in a marvelous massive melee combat scene I’m convinced is a homage to the final shootout in Sam Peckinpah’s “The Wild Bunch”)

AVENGERS: AGE OF ULTRON gave me the same feeling I had as a kid when I first discovered the comic book and I treasure that feeling. It shows that superhero movies can be visually eye-popping and have astoundingly jaw-dropping fights and still not lose sight of what makes these characters work: they are men and women of godlike power who truly care about protecting the world and the people who inhabit it.  By all means, go see it and have fun.

One thought on “Avengers: Age of Ultron”