Ask any fan of the “A Nightmare on Elm Street” series which is their favorite movie out of all of them. I think I am safe in saying that they’ll answer with A NIGHTMARE ON ELM STREET 3: DREAM WARRIORS. Hell, I know people who don’t like the series and you couldn’t pay them to watch any other movie in the series but they’ve seen and they like A NIGHTMARE ON ELM STREET 3: DREAM WARRIORS. It’s the “Wrath of Khan” of the series in that it’s the one just about everybody agrees is the best of the sequels and it’s the one everybody will claim as their favorite. No other Freddy Krueger movie would have such popularity with critics and audiences alike until “New Nightmare” came along years later.

Then in front of the camera you’ve got Heather Langenkamp returning to the series. Joining her you’ve got Patricia Arquette and Larry Fishburne who even this early in their careers turn in crackerjack performances. Add to that Craig Wasson who had proved himself as an actor to watch in movies such as “The Boys In Company C” “Ghost Story” and “Body Double” as well as an exceptionally strong supporting cast of young actors led by the wonderful Jennifer Rubin and yeah, it’s no surprise at all why A NIGHTMARE ON ELM STREET 3: DREAM WARRIORS is as good as it is. 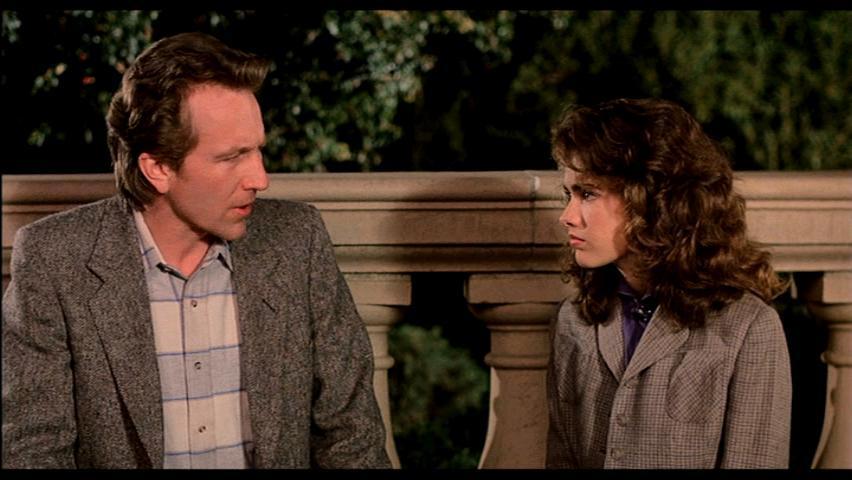 Dr. Neil Gordon (Craig Wasson) works in a special wing of the psychiatric hospital Westin Hills where he treats adolescents who share the same phobia about falling asleep and dreaming, claiming that there is somebody in their dreams trying to kill them. The patients are: Joey (Rodney Eastman) who has been so traumatized by his dreams that now he refuses to speak. Kincaid (Ken Sagoes) a tough kid with serious attitude issues and anger management difficulties. Taryn (Jennifer Rubin) who is not only fighting her dreams but her drug addiction. Will (Ira Heiden) who was so terrified of his dreams he tried to commit suicide. The attempt failed but left him a cripple. Jennifer (Penelope Sudrow) is an aspiring actress whose arms are covered in cigarette burns as that’s her chosen method of fighting off sleep and Philip Bradley Gregg) a sleepwalker.  Dr. Gordon is assisted in caring for these kids with the capable help of Dr. Sims (Priscilla Pointer) and the orderly Max (Larry Fishburne) They’re joined by Kristen (Patricia Arquette) who also tried to commit suicide and nobody will listen to her story that it actually was Freddy Krueger who made her try to kill herself. 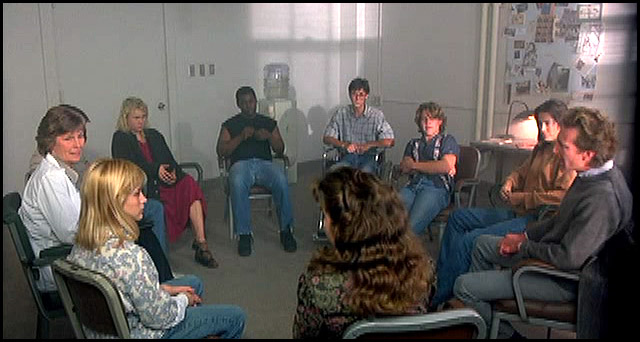 Nobody until Nancy Thompson (Heather Langenkamp) comes to the hospital. Now a dream therapist herself, Nancy discovers that Kristen has a psychic ability to bring people into her own dreams and Nancy realizes that this may be a way to finally destroy Freddy. Especially when in a shared group dream induced by hypnosis, each member of the group discovers they have what amounts to a superpower while in the dream world. After the frightening deaths of two of the group, the survivors decide to, in the words of Kincaid himself: “go kick that motherfucker’s ass all over dreamland.” It’s a brutal and vicious battle to finally destroy Freddy Krueger not only in the dream world but in the real world as well as while Nancy and the kids are fighting Freddy on one front, Nancy’s father (John Saxon) and Neil Gordon in the real world have to find Freddy’s bones and properly bury them in order to truly be rid of him for good. It’s a battle not all of them will survive.

There’s so many good things about DREAM WARRIORS I could easily go on for another fifteen or twenty thousand words describing them. We get the hideous origin of Freddy Krueger; “the bastard son of a hundred maniacs” The dream imagery in this one is especially memorable. There’s the scene everybody remembers where Philip is manipulated by Freddy like a puppet by means of his own blood veins which Freddy has stripped out of his body. There’s the scene where the kids discover their dream powers. The scene where an ordinary room transforms into a blast furnace with the kids trapped inside. The snake monster with Freddy’s head that tries to swallow Kristen alive.

This is also the movie where Freddy starts with the one-liners and for the first time we see him actually psychologically manipulating, terrorizing and torturing his victims in their dreams before killing them. Whereas in the first two movies he just went about the business of killing with the single-mindedness of the shark from “Jaws” in DREAM WARRIORS we see that the game of cat-and-mouse is just as important to him as the actual kill.

The acting in this one is just perfect and I really can’t say honestly that there’s a bad performance in this one. The standouts for me include Larry Fishburne, of course, who makes the relatively minor character of Max memorable in every scene he’s in. Nan Martin as Sister Mary Helena/Amanda Krueger who has a chilling, riveting scene where she describes the circumstances of Freddy’s birth. And of course there’s Jennifer Rubin who besides being nuclear hot also makes every scene she’s in snap, crackle and pop with the characterization of Taryn as a living exposed nerve ending. The crew of young actors are all quite good as well and never overplay their scenes or for a minute do anything less than convince you of the reality of their situation.

Can you tell how much I like this movie? And I really do. Unlike “Freddy’s Revenge” which moseyed along and took its time to get where it’s going, DREAM WARRIORS fast-steps like a man late for work. It moves with a purpose and confidence that none of the other movies that came after it would have until we come to “New Nightmare” Make no mistake about it, when it comes to the sequels; A NIGHTMARE ON ELM STREET 3: DREAM WARRIORS is the true jewel in the crown. Enjoy.

4 thoughts on “A Nightmare on Elm Street 3: Dream Warriors”