Based on characters created by Wes Craven

When discussing the “Nightmare on Elm Street” series with others, the question always comes up as to just why has this movie franchise managed to still be popular and successful even after so many years. Fans of the franchise such as myself faithfully rewatch the series every Halloween and it’s continually picking up new fans who weren’t even born when the series was in the theaters.

Me, I think it’s because unlike other franchises such as “Halloween” and “Friday The 13th” which pretty much told the same story over and over and over again, one movie after another, the “Nightmare on Elm Street” movies honestly tried to do something different with every new entry in the series. Whether it be in terms of actually advancing the terrifying story of Freddy Krueger or doing special effects work that really were outstanding and cutting edge at the time (the scene with the chick who gets turned into a cockroach and crushed in a roach motel in “A Nightmare on Elm Street 4: The Dream Master” still freaks the shit outta me) the creative folks involved truly did try to do something different with each movie. The “Nightmare on Elm Street” movies don’t become one big blur as other franchises where it gets hard to remember what the plot of different movies were. You name a specific “Nightmare on Elm Street” movie to somebody and I’m willing to bet that they can pretty accurately describe what the plot was.

And that brings us to A NIGHTMARE ON ELM STREET 2: FREDDY’S REVENGE which truly is about as different a horror movie you’re going to find. Why is it different? First, there’s Freddy Krueger (Robert Englund) himself. For some unexplained reason, Freddy has decided to manifest himself in The Real World instead of safely killing Elm Street kids in their sleep. To this end he’s picked Jesse Walsh (Mark Patton) as his host body. Jesse’s family have moved into the former home of Nancy Thompson (Heather Langenkamp doesn’t appear in this one, though. We don’t find out what she’s been doing until the next movie, “Dream Warriors”). Jesse takes Nancy’s old room for his own and immediately begins having dreams of Freddy Krueger who demands that Jesse kill for him. Jesse even finds Freddy’s old razor bladed glove in the basement of the house and his girlfriend Lisa (Kim Myers) finds Nancy’s old diary in his closet.

While Jesse struggles to understand what’s going with him with the help of his friend Ron (Robert Rusler) Lisa does research into the background of Freddy Krueger and the series of mysterious killings that took place on Elm Street five years ago.

And now here’s where the movie goes off into the direction it’s best known for: the homoerotic subtext that supports most of the movie. I myself think that the movie’s director and writer messed things up when they had Freddy plainly be seen by other people as they had a pretty interesting psychological angle going, with Freddy representing Jesse’s repressed homosexual feelings for Ron. There’s two scenes in the movie where it could be interpreted that Jesse has had sex with men and unable to deal with this aspect of himself kills them and blames the killings on Freddy, hallucinating that he sees him. Want more evidence? There’s a great scene where Jesse is making out with Lisa at a pool party and suddenly panics due to Freddy manifesting himself in Jesse and he breaks it off, running to Ron’s house, sneaking into his room in the middle of the night. Ron gets in the best line in the movie here: “Now let me get this straight…she’s waiting for you in the cabana. And you wanna sleep with me.”

Not enough for you? There’s the high school gym teacher that is killed in a pretty blatant S&M fashion after he encounters Jesse in a gay bar. Most of the victims Freddy terrorizes and/or kills are men. Mark Patton himself in interviews lays claim to being the first male Scream Queen and he gets my vote. I don’t think I’ve ever seen a movie where the lead male role does so much screaming. In fact, most of the men in this movie are ineffectual, with Jesse’s father Ken played by Clu Gulager leading the way. This cat is so much of a brain dead blockhead he borders on being a sitcom dad. It’s the women in this movie who are level-headed, sensible and have steel in their spines. Taken just on that level of traditional male/female roles in horror movies being reversed and the homoerotic subtext, A NIGHTMARE ON ELM STREET 2: FREDDY’S REVENGE makes for intriguing viewing. 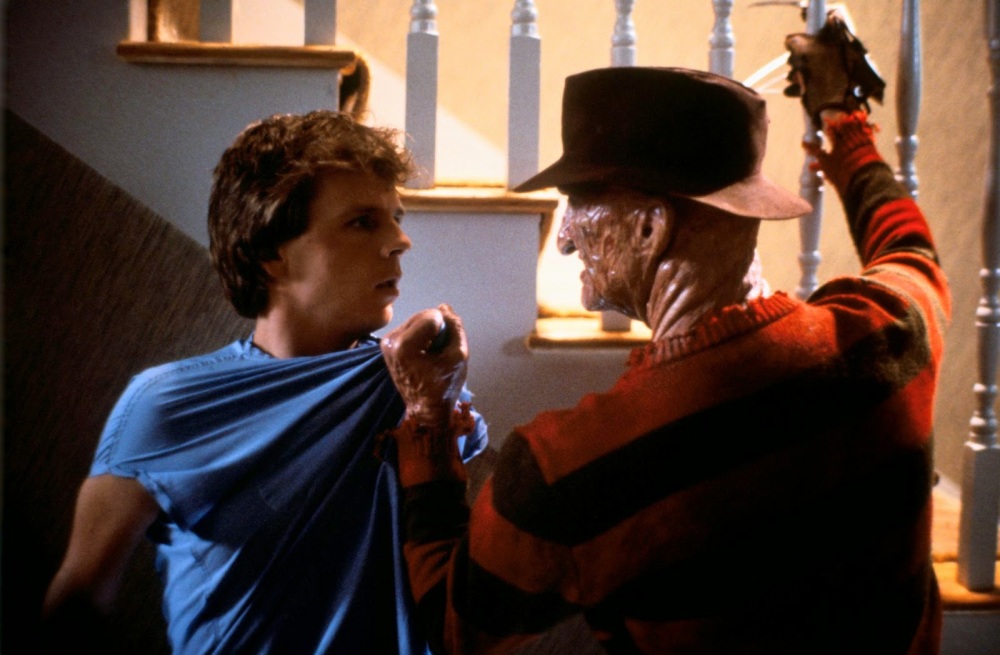 But how does it rate purely as a horror film? I liked how the movie takes its time introducing the characters and making sure we know who’s who and what they’re all about before the mayhem starts. I don’t think it’s anywhere near as violent or as blood-soaked as some of the later films. But it manages to showcase a couple of really nice sequences. The major one being the scene where Freddy tears his way out of Jesse’s body. And the pool party scene is redeemed by that terrific shot of Freddy haloed in flame proclaiming to the terrified teenagers; “You are all my children now.”

But you really can’t get around the fact that when you look at the movie objectively, it’s not a Freddy Krueger movie. Supposedly Freddy has exactly thirteen minutes of screen time. In a movie that runs eighty-seven minutes, that’s not a lot. The movie’s not about Freddy Krueger at all. It’s about a young man confused and conflicted about his sexuality with Freddy as a supporting character in his own movie. Now some may call this the weakest “Nightmare on Elm Street” movie but me, I’ll still take A NIGHTMARE ON ELM STREET 2: FREDDY’S REVENGE over “Freddy’s Dead”

One thought on “A Nightmare On Elm Street 2: Freddy’s Revenge”