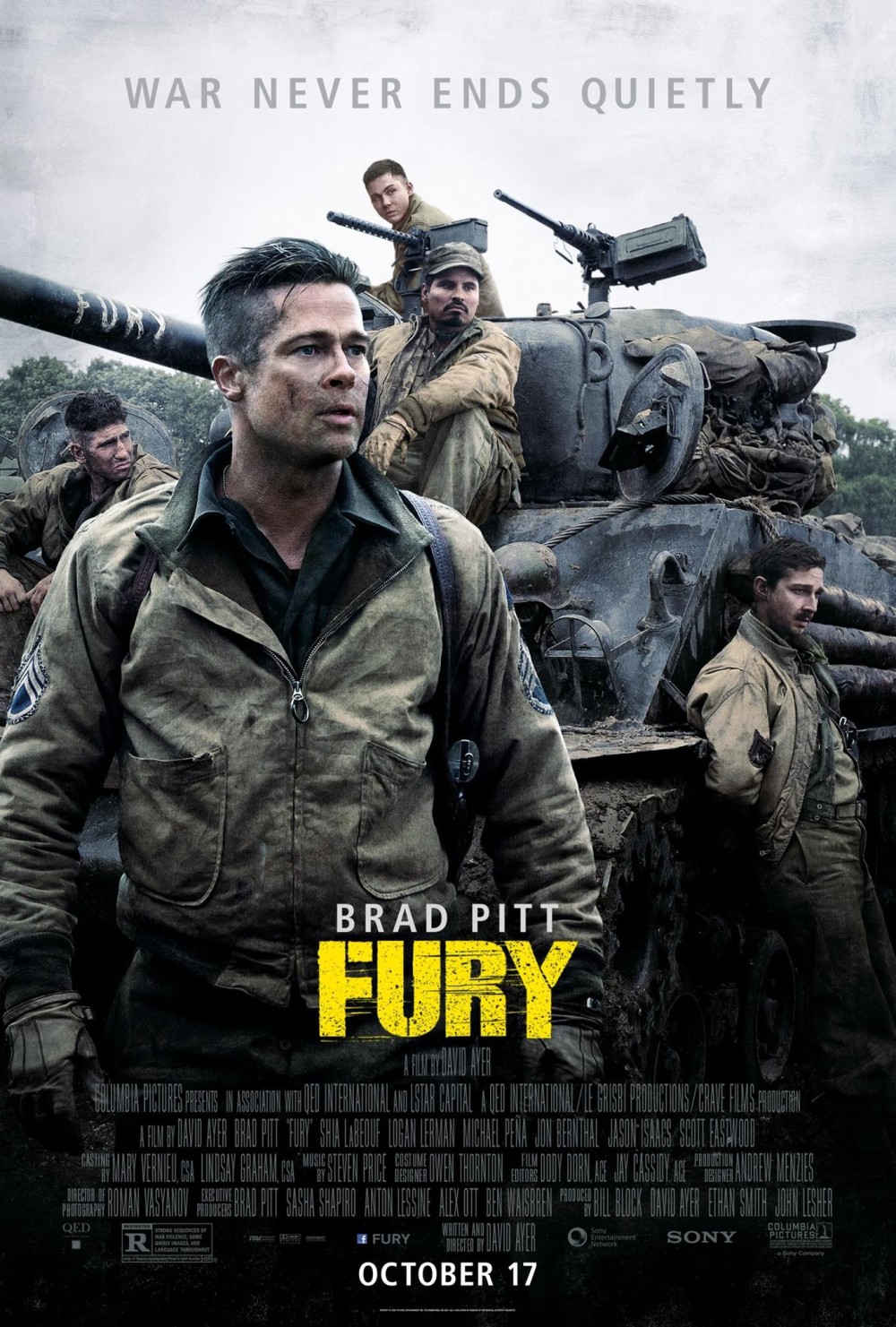 Written and Directed by David Ayer

If you’re like me and spend way too much time watching Turner Classic Movies then you surely must have seen many of the World War II movies they frequently show. Especially during Memorial Day Weekend which is given over to nothing but war films, most of them taking place during World War II. You have? Good. Because if you’ve seen a significant amount of World War II films, especially those made during that period then there’s nothing about FURY that’s going to surprise you or make you think you’re watching something new. Oh, it’s a helluva lot more profane and hideously bloody but for all intents and purposes this is a 1940’s war movie with way more graphic violence and language.

In writing and directing FURY, David Ayer has actually taken a step back and made a movie that’s unashamed of being violently macho. Sam Peckinpah would have loved this movie, I think. Because it’s a movie very much about When Men Were Men and doesn’t make any apology for it or the actions of “Wardaddy” Collier (Brad Pitt) and his four man Sherman tank crew. There are definitely some questionable scenes in the film that more sensitive viewers than I may interpret as involving American soldiers committing atrocities against German POWs and a possible consensual rape. But I will leave that discussion up to others more qualified than I to judge the rightness or wrongness of such actions.

It’s the last months of the European Theater in April of 1945 and the Allies are making their final, decisive push directly into the heart of Nazi Germany. In the forefront of the 2end Armored Division is the M4 Sherman tank named Fury commanded by Don “Wardaddy” Collier. It’s crewed by the deeply religious Boyd “Bible” Swan (Shia LaBeouf) the brutish Grady “Coon Ass” Travis (Jon Bernthal) and Trini “Gordo” Garcia (Michael Pena) The fourth man was killed in a recent battle and Fury gets Norman “Machine” Ellison (Logan Lerman) as a replacement.

Norman is so far out of his depth it’s pathetic. As he tells Wardaddy; “Yesterday I was sitting in an office typing 60 words a minute. Today I’m expected to machine gun Nazis.” Watching Norman’s transformation from terrified office worker to combat veteran is the major character arc of the movie and while it seems to me a really quick process as Norman takes to killing quite well I bought into the reasons for it because…well, it’s a World War II movie. What do you want, Shakespeare?

Norman and Wardaddy develop a strong bond that is tested when the crew of Fury accepts a mission to hold a vital road crossing against three hundred elite SS soldiers. Of course, at the time they accepted there was three other tanks backing them up. The other tanks are lost so it’s up to this one tank and five men, outnumbered and outgunned to protect the crossing. By doing so they’ll buy valuable time for a supply train to get through.  I’ll only just say that the apocalyptic battle between Fury’s crew and the three hundred SS soldiers reminded me a whole lot of that final fantastic shoot-out in Sam Peckinpah’s “The Wild Bunch” and leave it at that.

A lot of FURY is mostly giving us that “War Is Hell” message that we’ve all seen in just about every war movie made. FURY can also indulge in a lot more brutality and downright viciousness but it also can take a moment to provide us some insight into Brad Pitt’s character of Wardaddy Collier, a man who has let the war make him as much of a horror in battle as the Nazis he hates with a frighteningly relentlessness. Between his work in TV’s “The Walking Dead” the movies “Snitch” “Grudge Match” and FURY, Jon Bernthal is rapidly becoming a favorite actor of mine. He’s one of those actors that always does something worth watching when he’s on screen. Michael Pena is nothing less than excellent as he always is.

The guy who really surprised me, though? Shia LaBeouf. I’ve never disliked his work but he’s one of those actors that I can “see” acting. Know what I mean? And he unfortunately was being shoved onto the public by the Hollywood press who tried desperately to convince us that we loved Shia LaBeouf when actually, many wished he would just stop making movies. But I’ll tell you something…he actually is pretty good here. Now, I’m not saying he was Marlon Brando or Steve McQueen good but at least I couldn’t see the parts moving when he was on screen like I could in his other movies.

So should you see FURY? Yes. It’s a solid piece of entertainment that has exceptionally good location shooting and production value. It was made for $68 million and looks like it cost twice that much. Just don’t go in expecting Brad Pitt to be playing a version of Lt. Aldo Raine. Wardaddy certainly isn’t anything like that character and FURY is most definitely its own kind of war movie.