So I’m going through this big blue notebook that I have on my desk that’s stuffed with character profiles, fragments of stories, research on technology and locations for future stories, character names, scraps of ideas for stories I’ll most likely never live long enough to write.  Every so often I’ll make an attempt to try and clear away some of the dead wood.  It’s a continual exercise in futility because I rarely throw away anything I’ve written because sooner or later it gets recycled into other stories.  And that includes the first two movie reviews I ever wrote.

Back around 1997/1998 we didn’t have a computer.  Instead, Patricia and I shared a WebTV that was an Internet access device that worked through your TV.  You plugged it into your phone line and voila, you were able to surf the web, send and receive emails, all that good stuff.  It wasn’t a computer but it was a good way for novices like us to get our feet wet as far as The Internet was concerned.

And it was by means of WebTV that I created the first version of “Derrick Ferguson’s Notebook” which was a website that mostly consisted of comic book reviews, television shows reviews…and oh, yes…movie reviews as well.

So I thought it would be fun for me to present here the very first two movie reviews I wrote.  After all, they’re sitting around not doing anything and I’ve already told you how much I hate waste.  I was tempted to rewrite them but that wouldn’t be fair at all and not nearly as interesting.  The only thing I’ve cleaned up is the grammar and spelling so 95% of what you’re about to read is unchanged from the day I wrote them around sixteen or so years ago.  Enjoy.

Based on the novel ‘The General’s Daughter’ by Nelson DeMille

THE GENERAL’S DAUGHTER is a murder mystery set on an Army base.  Warrant Officer Paul Brenner (John Travolta) is an investigator in The Army’s Criminal Investigations Division.  He’s kinda like an Internal Affairs cop, only for the military.  When he’s on a case he can question Colonels, Generals, anybody he pleases and rank doesn’t matter.  And it’s a good thing for him since his latest case involves the horrifying brutal death of Captain Elizabeth Campbell (Leslie Stefanson) and Brenner’s quest to find her killer will bring him into contact with some very top brass.

Captain Campbell is the daughter of General Joseph Campbell (James Cromwell) and daughter dear was inconsiderate enough to get herself murdered just as The General is contemplating entering the political arena since he’s practically been promised the Vice-Presidency.

Brenner is assigned to the case by The General himself and told he has 36 hours to find her killer because after that it’s in the hands of The FBI.  The General’s loyal aide, Colonel George Fowler (Clarence Williams III) gives Brenner some advice on how to proceed with his case: “There’s three ways of doing things.  The right way, the wrong way and The Army way.  I trust you’ll know which way to go on this.”

Brenner acquires a partner, Warrant Officer Sara Sunhill and they begin the investigation into Elizabeth Campbell’s murder and the more they find out about her, they more they begin to suspect that the solution of the crime may be more frightening than the crime itself.

What exactly was Captain Elizabeth Campbell’s job in the Army’s Psychological Operations Division?  What kind of relationship did she have with her superior, Colonel Robert Moore (James Woods)?  What could have happened to Elizabeth in her last year at West Point that caused her psychiatric evaluation records to be sealed?

I liked THE GENERAL’S DAUGHTER right from the start and it held my attention right up to the end.  There’s some good plot twists and I’m hoping that our military leaders aren’t as twisted in real life as the movie makes them out to be.

The cast has a good time with their roles, especially Travolta, Cromwell, Woods and Williams.  Travolta’s Brenner is a guy who’s shockingly good at his job and he obviously enjoys using his C.I.D clout to bring the big brass down a peg or two.  Travolta has a scene with Woods where they verbally joust, using their wits like rapiers in a psychological duel that’s just as suspenseful as a well-choreographed fistfight.  And James Cromwell does an excellent job as The General.  A good mystery well worth the time and rental fee. 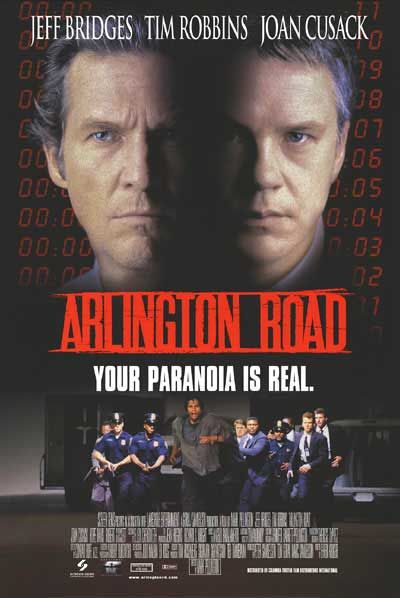 First off I have to warn you about two things concerning ARLINGTON ROAD.  One: it’s a slow starting movie and you may spend the first forty minutes or so wondering when something’s gonna happen.  Do yourself a favor and keep watching.  Two: pay attention to what does happen because when you get to the shocking, jaw-dropping ending, everything that has come before clicks into place like a Rubik’s Cube and all the colors are there right where they’re supposed to be.

Michael Faraday (Jeff Bridges) lives and works in Washington, D.C. where he teaches a class on Domestic Terrorism at the local university.  He’s raising his nine-year-old son and dating Brooke Wolfe (Hope Davis) one of his graduate students.  Faraday’s still trying to get over the death of his wife, an FBI agent killed in action.  The FBI got hold of some bad information concerning an extremist group stockpiling weapons and Faraday’s wife paid for it with her life.

Through an action involving the son of his neighbors, Oliver and Cheryl Lang (Tim Robbins and Joan Cusack) Faraday becomes friends with Oliver and soon they’re sitting in Oliver’s backyard, drinkin’ beer, and kickin’ the willy bobo about terrorism, bombs and how screwed up the government is.  Y’know, regular backyard talk.

Faraday’s FBI friend Whit Carver (Robert Gossett) is glad Faraday is coming out of his shell through his relationship with Brooke and The Langs and Faraday himself is liking the way his life is going a lot.  Until he notices those blueprints of downtown D.C. office buildings that Oliver has lying around.  It’s probably nothing but Faraday’s paranoid has been reawakened and he does some checking on Oliver’s background.  And he discovers that Oliver changed his name years ago because he tried to blow up a government building in Kansas when he was just 17.  Faraday starts thinking and while he doesn’t like what he’s thinking he can’t ignore the very real possibility that Oliver Lang may be planning a new act of domestic terrorism.

Is Lang really planning a terrorist bombing or is Faraday just being a really, really nosy neighbor?  It’s a lot like Warren Beatty 1974 conspiracy classic “The Parallax View” in which you’re never sure what’s true and what’s not.  At least not until the ending and ARLINGTON ROAD has some ending.

I really can’t go into any more detail because ARLINGTON ROAD depends so much on the mood of paranoia it generates and I don’t want to spoil it for anybody who decides they might want to rent it.  Jeff Bridges doesn’t play a superhero that grabs a machine gun in each hand and sets out to stop the terrorists single-handedly.  He makes mistakes.  He jumps to conclusions with nothing to go on.  He can’t get anyone to listen to him or believe him.  He’s confused and scared and panicked that he might have placed the lives of his son and the woman he loves in danger.  More than anything else, he’s afraid that more innocent people are going to die and he can’t do anything to stop it.  He’s a man whose terrible loss is a weakness that allows him to be twisted and manipulated in such a way that really took me by surprise.

I can’t let the great performances of Tim Robbins and Joan Cusack go without a comment.  Robbins is the perfect next-door neighbor.  Always helpful.  Always smiling.  Just think twice when he offers to take your kid camping.  And Joan Cusack manages to be both creepy and funny at the same time.  She’s like the ultimate Stepford Wife, smiling and baking cookies while sweetly planning murder and mayhem.  I was shocked out of my seat twice and both times it was because of Joan Cusack.

ARLINGTON ROAD.  Watch it.  Then watch your neighbors.

2 thoughts on “The General’s Daughter and Arlington Road”