Most of us got to know Will Smith first as a light-hearted rapper and wildly talented comedic actor thanks to his hit records like “Parents Just Don’t Understand” “Miami” and “Summertime” as well as the TV show “Fresh Prince of Bel Air” He then moved smoothly and effortlessly into high action blockbuster movies like the two “Bad Boys” as well as “Independence Day” the “Men In Black” movies, “Enemy of The State” and “I, Robot.” And in movies such as the biopic “Ali” and “Seven Pounds” he proved he had the chops as a straight dramatic actor as well.

Will Smith quickly proved himself to be one of the most likeable and charming actors of our time.  Even when he’s in a turkey like “Wild Wild West” or “Hitch” he never fails to deliver a solid performance full of humor and professionalism.  One of the things I like about Will Smith is that he always looks as if he’s having a helluva good time making movies.  He’s just all around fun to watch.  But a lot of people forget that when he started out in movies in did so in dark dramas such as “Where The Day Takes You” and “Six Degrees Of Separation.”  THE PURSUIT OF HAPPYNESS (and yes, happiness is spelled wrong for a reason the movie explains and I won’t, so now you’ve got another reason to go see it) is a dramatic movie that has a lot of Will Smith’s trademark humor.  But it’s there for a reason.  If the character Will Smith plays wasn’t able to have a sense of humor about his situation he’d probably have killed himself 45 minutes into the picture.

It’s 1981 and Chris Gardner (Will Smith) is a San Francisco salesman struggling to keep his family together.  He’s trying to sell bone density scanners to doctors who really don’t need them since they’re little more than fancy X-Ray machines.  His wife Linda (Thandie Newton) is worn out from working double shifts on her job and she can look in the mirror and see the old woman she’s becoming before her time and she hates it.  Their five-year-old son Chris (Jaden Smith) is like a lot of frighteningly perceptive five year olds that can sense the hostility between their parents but have no idea of what is causing it or how they can fix it.  The constant financial pressure is eroding the family and Chris knows that they’re one paycheck away from being homeless.  Using all of his salesmanship skills as well as his considerable charm he manages to get accepted into a six-month internship program with the prestigious stock brokerage firm Dean Witter.  Even though there’s no salary if he makes it through there’s the promise of an excellent paying job and more importantly, a stable and secure future for him and his family.

Linda isn’t prepared to wait the six months as she’s fed up with the whole situation.  She leaves for New York which leaves Chris as a single father balancing taking care of his son, trying to sell those damned bone density scanners to keep them eating as well as fulfilling his obligations to the internship program.  Chris just can’t catch a break, though.  He and his son are evicted from their apartment and then a hotel and in a frighteningly short amount of time Chris and his son find themselves homeless, carrying around their belongings in a suitcase and a couple of black plastic bags.  They sleep in subways and public bathrooms.  If they’re lucky and can make it in time they get a room at The Glide Memorial Church for the night so they can wash up and sleep in a real bed. 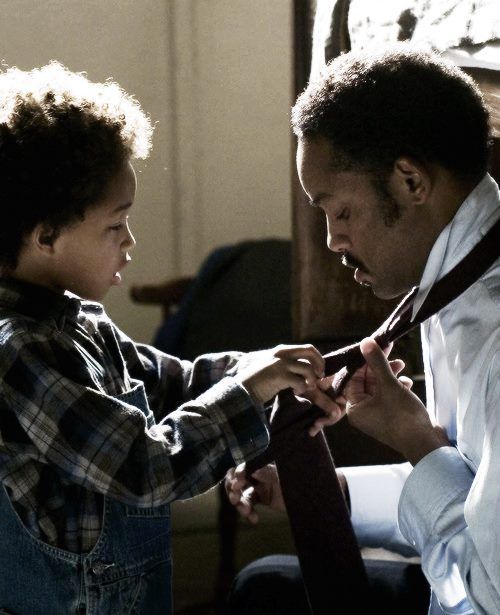 Throughout all of this Chris uses the love and trust of his son to keep him focused on his goal: finishing the internship and getting the job.  None of his fellow interns or instructors knows that he’s homeless.  He takes care to keep his suits and dress shirts immaculate and he always shows up for work looking clean as the Board of Health.  When asked why he’s always carrying around a suitcase he’s never at a loss with a plausible excuse.  He has to do twice the work of his fellow interns in half the time since he has to be across town to pick up his son from the daycare and then race to the church to stand in line to hopefully get a room.  It’s a situation that would make a lot of us jump off the nearest bridge and drown ourselves.  And indeed, there are scenes where we see that the strain of maintaining the fiction that there’s nothing wrong with his life is scraping Chris’s nerves raw.  His son helps by telling him really bad jokes that never fail to make Chris laugh.  He insists that his dad kiss his Captain America action figure goodnight.  And in a truly heartbreaking scene the boy reaches out to his father at a crucial time when Chris is at his lowest and says softly; “You’re a good poppa.”

THE PURSUIT OF HAPPYNESS is a movie that would be so painful as to be unwatchable if it weren’t for the performances of Will Smith and his real life son Jaden.  The two of them are so resourceful, so patient and supportive of each other that very quickly you’ll find yourself rooting for this father/son team to pull themselves out of the unfortunate situation they’ve found themselves in.  The movie remind us that not everybody in the 80’s who found themselves homeless were crack addicts or mentally ill.  Many were hard-working people who simply made bad decisions.  And in our unforgiving society that’s all it takes: just a couple of bad decisions.

The movie works on a lot of levels: as a social commentary on the hoops that American society forces us to jump through in our mutual pursuit of happiness as well as a drama.  There are also a lot of moments of humor in the movie but they’re not forced and work amazingly well.  They provide a well-needed laugh to give us a release from scenes that are so painfully honest that only a person with a heart of stone could not be moved.

The movie sits on Will Smith’s shoulders since he’s on screen 99% of the movie’s running time and he’s more than capable of carrying the burden.  There’s never a moment when you don’t believe his performance.  He dials back his usual movie persona way back here and plays a recognizable human being we can relate to.  A lot of people are going to come away from this movie hating Thandie Newton’s character but they shouldn’t.  She’s not in the movie very long but she makes her pain and weariness plain.  Thandie Newton manages to do a lot of remarkable work with her brief screen time.  Look for Dan Castellaneta (the voice of Homer Simpson) as the instructor of Chris Gardner’s intern class.  And Jaden Smith is totally adorable as the young Chris.  I thought there was a nice little subtext to his devotion to his Captain America action figure but I’ll leave it for you guys to see if you saw the same thing I did.  The real life relationship between Jaden and Will gives the movie a lot of its emotional resonance and their scenes together are among the best in the movie.

So should you see THE PURSUIT OF HAPPYNESS?  You certainly should.  If you’re a Will Smith fan this is an opportunity to see him in what I suspect will come to be known as a really important role in his career.  No, it’s not an easy film to watch but it’s worth sitting through the pain for the payoff at the end  I think it’s important for us all to watch a movie like THE PURSUIT OF HAPPYNESS if for no other reason than it get us to really look at the homeless guy on the corner and think about who he was once upon a time and what dreams and aspirations he pursued.