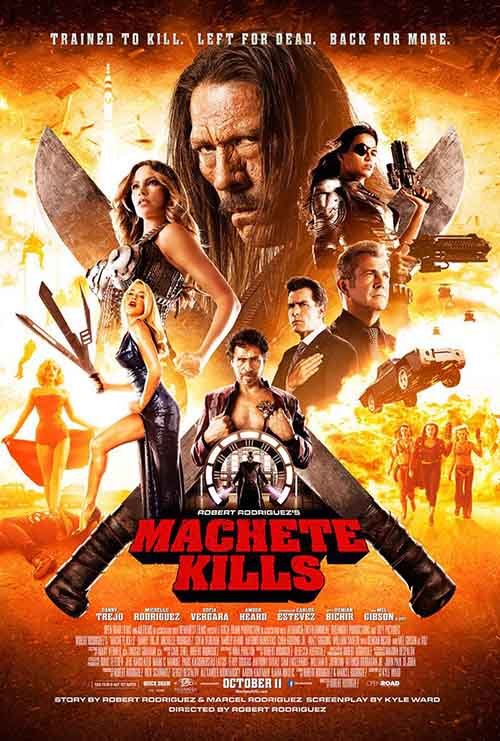 By now the story has become legend: 2010’s “Machete” was a full length feature film based on a fake trailer made for 2007’s “Grindhouse” which was a double feature of movies directed by Robert Rodriguez and Quentin Tarantino. “Grindhouse” was an ambitious experiment to recreate the movie-going experience of the 1970’s when grindhouse theaters showed double features of popular exploitation movies. Five fake trailers were made and of those, two movies actually were made; “Machete” and “Hobo With A Shotgun” starring Rutger Hauer. I’m still holding out for “Werewolf Women of The SS”

“Machete” turned out to be a really damn good movie with Danny Trejo backed up by an all-star supporting cast including Robert DeNiro, Steven Seagal, Cheech Marin, Don Johnson, Lindsey Lohan, Michelle Rodriguez and Jessica Alba. Yeah, the plot was pure pulp absurdity but it was grounded in just enough reality to make the whole thing go down well. And even among all the wild shootouts and Danny Trejo chopping up everything in sight with everything he can get his hands on (one of the enjoyable bits of the movie is how Machete can improvise bladed weapons on the fly) Robert Rodriguez managed to get in some pretty on-point political statements about Mexican-American relations and illegal immigration. It also had Electra and Elise Avellan in nurses uniforms blasting away at rednecks with machine guns, so for me the movie was a major success.

Wish I could say the same about MACHETE KILLS. The initial set-up is just fine and had me sitting up straight to see what was going to happen next but director Rodriguez and his screenwriter Kyle Ward just didn’t know when to leave well enough alone. Be patient just a bit and I’ll tell you where the movie went wrong for me.

Machete Cortez (Danny Trejo) and his girlfriend/partner Sartana Rivera (Jessica Alba) are in the middle of breaking up an illegal arms sale on the Texas/Mexico border. Members of the Texas Army Reserve are selling military weapons to a Mexican drug cartel. A third party intervenes, leaving everybody dead except for Machete who is captured by Sheriff Doakes (William Sadler) who intends to give Machete a quick trial and even quicker execution for messing up his arms deal.

Reprieve comes in the form of not the governor but The President of The United States himself; President Rathcock (Carlos Estevez/Charlie Sheen) who has a mission for Machete. He wants Machete to go back down to Mexico to find and assassinate the revolutionary Marcos Mendez aka The Madman (Demian Bichir) who has a nuclear missile pointed at Washington, D.C. Machete agrees and upon finding Mendez discovers that he has three separate personalities: there’s one who is an out and out psychopath and that’s the one who wants to destroy Washington, D.C. There’s the revolutionary who only wants what’s best for Mexico but doesn’t want to slaughter millions to do it. And then there’s the core personality which is that of Mendez, the undercover government agent who started this whole thing simply to get information on the drug cartels and was forced to watch his wife and daughter be killed.

This is where I wanted Rodriguez to stop. Right there he had way more than enough plot and characters to work with and I’d have been happy with Machete struggling to stop this three-in-one villain. But no…he’s got to throw in Madame Desdemona (Sofia Vergara) and her crew of machine gun toting prostitutes to chase Machete as well as the metamorphing killer El Camaleon (Lady Gaga/Antonio Banderas/Cuba Gooding, Jr./Walton Goggins) This is before we get to the second half of the movie which is, believe it or not, a straight-up riff on “Moonraker” with Mel Gibson as the James Bondian villain Luther Voz who reveals that Mendez’s missile is only one of many he gave to mentally unstable world leaders so that they could fire them off at each other and destroy the world while Voz takes his selected people to his orbiting space station.

Now by the time we’ve gotten to this point of the movie, we’ve abandoned all reason and entered the realm of WTF as Rodriguez throws armies of killer clones at Machete, has him using a raygun that turns people inside out…and it doesn’t stop there. Voz rides around in a replica of Luke Skywalker’s landspeeder. We’ve got people being machine-gunned and then brought back from the dead.  Mexican workers are being teleported off the planet to labor on Voz’s space station and She (Michelle Rodriguez) no longer runs The Network from a dilapidated warehouse. Her new headquarters are as high-tech as the S.H.I.E.L.D. Helicarrier. It’s as if Machete/ Danny Trejo has been suddenly transplanted into the middle of a Derek Flint movie. 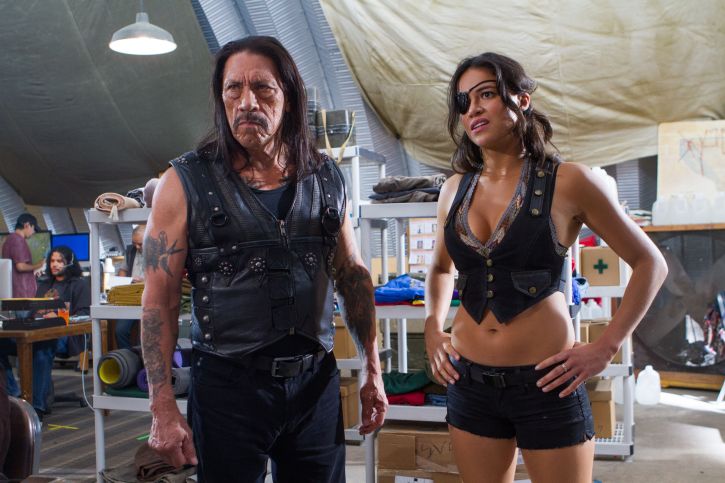 Before watching this movie I had listened to the review done by the talented guys over at The Grind Pulp Podcast and they mentioned that they thought one of the things about this movie that was detrimental to it was that it looked “too good” and after having seen it for myself, I understand perfectly what they meant. Rodriguez totally abandons the grindhouse look that MACHETE KILLS cries out for. The movie should have looked aged, beat-up. In fact, the trailer for “Machete Kills Again…In Space!” looks the way this entire movie should have looked. I never thought I’d be complaining that a movie looked absolutely spectacular but in this case I am. MACHETE KILLS has amazing cinematography and it shouldn’t. The cinematography should look like shit. Seriously. You know what I mean.

But I’m glad to say that everybody in this movie looks as if they were having an absolute party making it. Everybody shamelessly steals every scene they get with Sofia Vergara and her gatling gun bra being among the standouts. But I totally loved Amber Heard as a secret agent whose cover is that of a professional beauty pagent contestant.

The running gag of El Cameleon is the best one in the movie among all the craziness going on. Mel Gibson is totally off the wall as a James Bond supervillain and if you have any further doubts about how loopy everybody else is then lemme just say that when mollyfoggin’ Charlie Sheen is your most restrained cast member, nothing more needs be said.

And I have to mention Alexa Vega. As I said in a post on the Better In The Dark Facebook page, after seeing her in this movie I now have to throw away my “Spy Kids” videos as I fear that I can no longer watch the innocent little girl she was in those movies without having pervy old man thoughts of her as Killjoy infecting my consciousness:

So should you see MACHETE KILLS? Chances are most of you reading this already have and so my review is irrelevant. For those of you who haven’t I’d recommend you catch a matinee if you really want to see it. Otherwise, wait for Netflix or until you can see it for free somewhere. I gotta say this is actually this first movie Robert Rodriguez made that I felt disappointment when the final credits rolled. I think he had the opportunity to continue to make Machete a truly unique Mexican hero and dropped the ball with this movie.

However we do have Electra and Elise Avellan in tuxedo jackets, stiletto heels and mini-skirts blasting away at clones with machine guns so the movie isn’t a total loss.