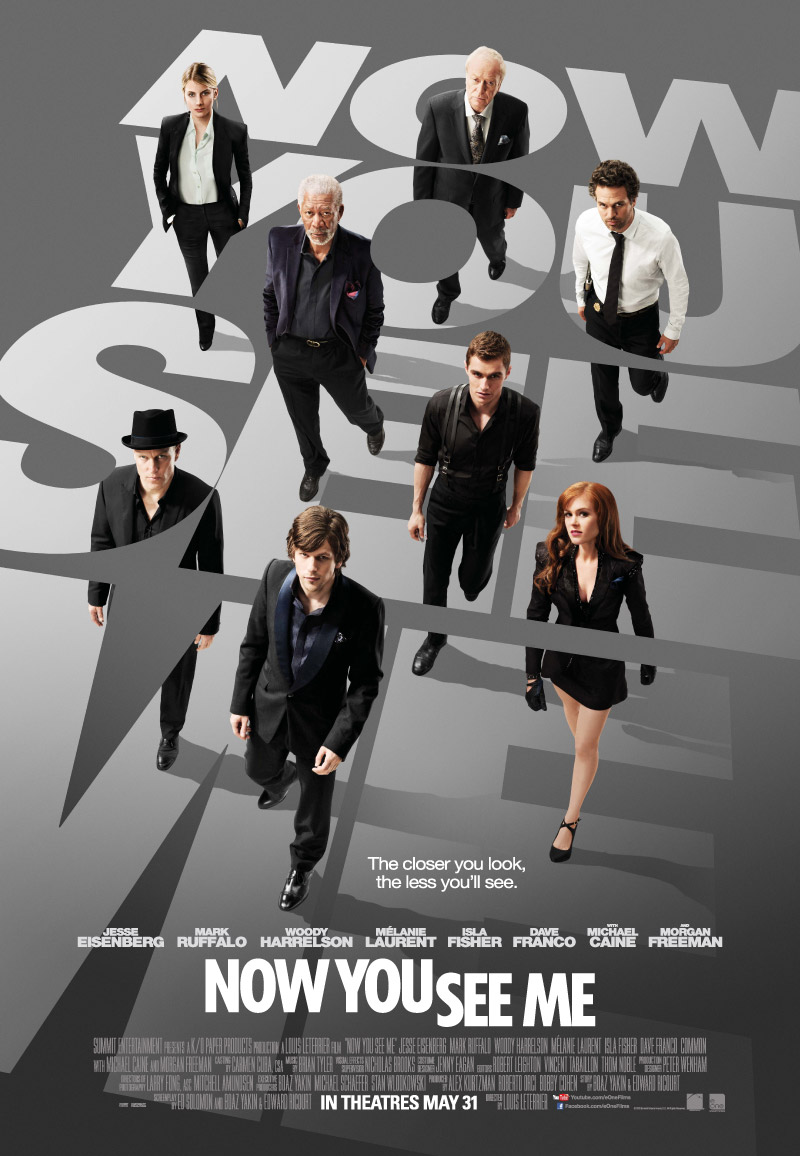 Writing a review of a movie like NOW YOU SEE ME is a tricky proposition. It’s a movie about magic and illusion and like a well done illusion, it spoils the trick when you know how it’s done. NOW YOU SEE ME is put together like an illusion and the best way to see it is by knowing as little about it as possible. But let me take a whack at it. *Derrick cracks his knuckles*

Daniel Atlas (Jess Eisenberg) is a David Blaine type of street magician, preferring performing his illusions as close to his public as he can. Henley Reeves (Isla Fisher) is a master escape artist. Jack Wilder (Dave Franco) is also a street level magician but he’s more of a hustler/con man than Daniel. Merritt McKinney (Woody Harrelson) is a mentalist/hypnotist. They’re all contacted by an unknown benefactor who turns them into team of performers called The Four Horsemen. Sponsored by billionaire Arthur Tressler (Michael Caine) within a year they become the toast of Las Vegas, known for spectacularly mind-boggling illusions. And then they pull off a real trick: during a performance in Vegas and with the assistance of an audience memeber they rob a bank in Paris, apparently by using actual teleportation and then give the money to the audience. 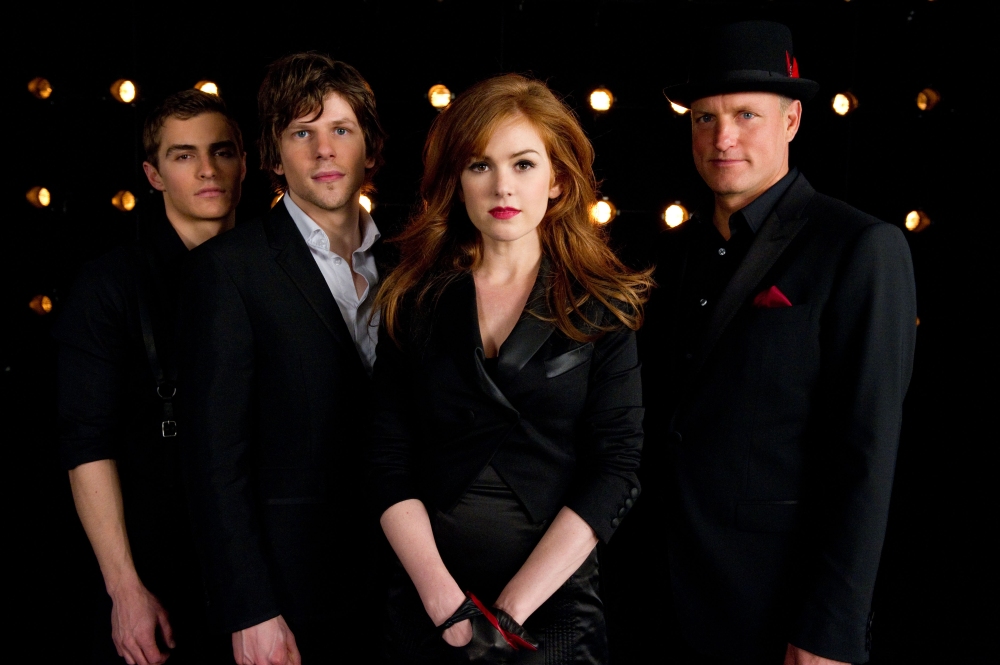 FBI agent Dylan Rhodes (Mark Ruffalo) and Interpol agent Alma Vargas (Melanie Laurent) are assigned to investigate the case. The Four Horsemen can’t be arrested for the crime because there is no way that the theft could have been accomplished except by using real, actual magic. And the FBI is not about to cop to that. Enter ex-magician Thaddeus Bradley (Morgan Freeman) who now makes a lucrative living revealing how illusions are performed. It’s a job that doesn’t make Bradley very popular with magicians but he doesn’t care. He agrees to help Rhodes figure out how The Four Horsemen pulled off the robbery and the ones that they’re going to do next as Bradley is convinced they aren’t finished. 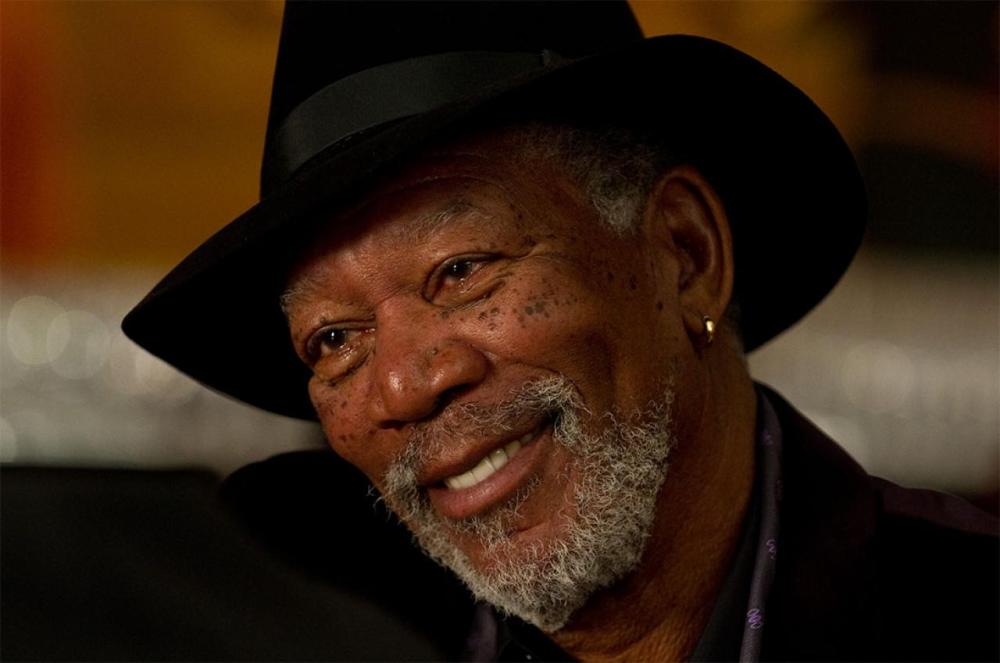 He’s right, of course. But is he right about there being an unseen, unknown Fifth Horseman working behind the scenes, pulling all their strings? And are The Four Horsemen just very skilled, very creative illusionists or are they performing real magic? And why steal all that money just to give it away? Are these heists just parts of a larger, grander illusion The Four Horsemen are planning or are they elaborate initiations into a secret society of magicians known as “The Eye” that The Four Horsemen seek to join?

That’s a lot of questions and the whole fun of NOW YOU SEE ME is watching as they’re answered one by one. Here’s the attitude you should adopt when you pay your ticket and sit in your seat to watch the movie: don’t even try to figure it out as it’s happening. It’s like watching David Copperfield at work. It’s best to just sit back and enjoy as the illusion is performed. Try to figure it out after it’s over but don’t burn up your brain cells trying to pull apart how it’s done while it’s being done. You won’t figure it out. Trust me.

There’s a lot of star power at work here and they’re all fun to watch. Watching Morgan Freeman and Michael Caine go at it toe to toe is nothing short of wonderful and I loved all their scenes together. By now Jesse Eisenberg can play a hyper-arrogant snotty intellectual in his sleep but that doesn’t mean I don’t like to see him do it again. Isla Fisher doesn’t have a lot to do but look good but she does it awfully well. Dave Franco gets to shine in an amazing fight scene with Mark Ruffalo. Woody Harrelson sorta surprised me as he’s really laid back in this movie. He works as part of an ensemble and stays there. Mark Ruffalo is an actor who’s a lot better than he gets credit for and he once again demonstrates it in this movie. Michael J. Kelly and Common also appear in small but pivotal roles and Elias Koteas has a brief and unaccredited cameo. Keep your eye out for him as he shows up in the last place you’d think to look for him. Everybody is on their ‘A’ game in this movie and the only thing I can say is lacking is the characterization. It’s awfully short on that but long on plot. But the energy of the direction by Louis Leterrier who also directed two of the “Transporter” movies, “The Incredible Hulk” and “Clash of The Titans” more than makes up for the skimpy characterization. 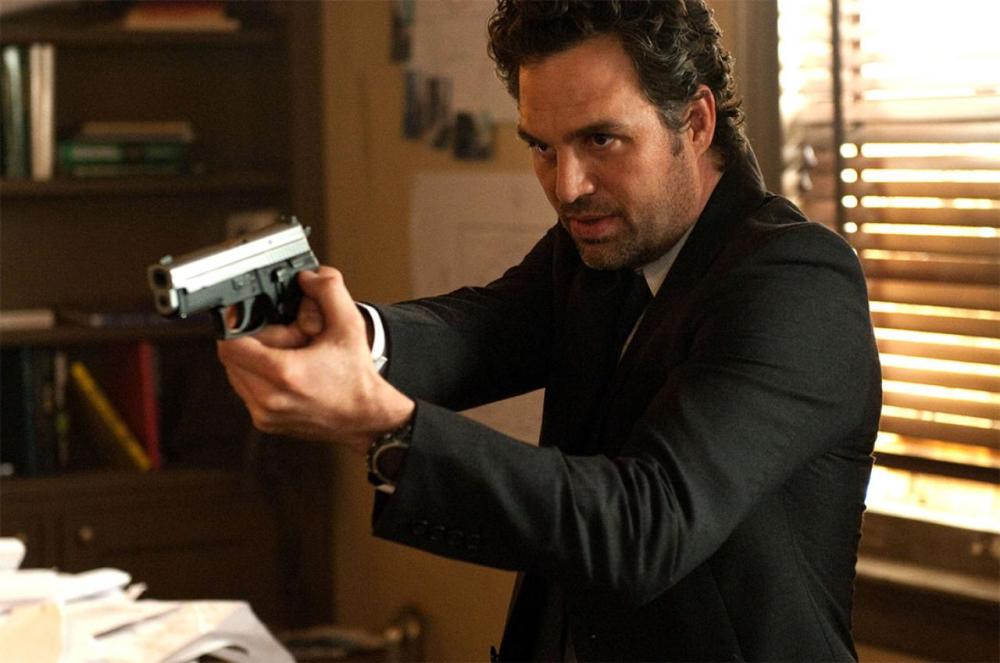 But the bottom line is that NOW YOU SEE ME is all about the unexpected. It’s a heist/caper movie, which I love and it takes place in the world of magicians and illusions which fascinates me to no end because it’s all about misdirection and deception. And making you think you’re seeing one thing while something else entirely is happening. And that’s exactly what going on in this movie. I had an awful lot of fun watching NOW YOU SEE ME. It’s an entertaining, professionally made summer movie. Enjoy with my blessing.

3 thoughts on “Now You See Me”