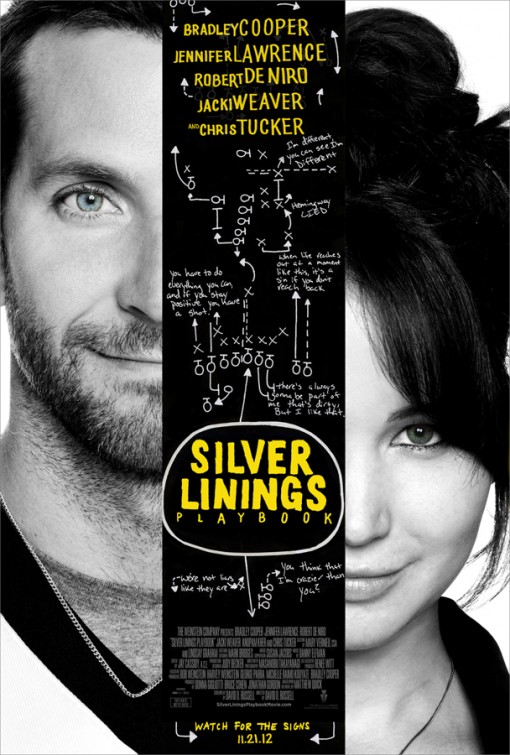 Based on the novel “The Silver Linings Playbook” by Matthew Quick

The first twenty minutes or so into SILVER LININGS PLAYBOOK I fidgeted, I admit it. But that’s because I couldn’t tell which way this movie was going to go with its characters or their story. I didn’t know much about this movie outside of that it starred Bradley Cooper and Robert DeNiro, who had previously worked together in “Limitless.” But it vaguely looked to me like a romantic comedy and I’m leery of that genre. Which I shouldn’t have been. I’ve watched romantic comedies like SILVER LININGS PLAYBOOK that actually are intelligent, character-driven and don’t follow the silly, sappy paint-by-the-numbers plots of most romantic comedies. And this movie isn’t all comedy. There’s just as much drama as comedy here and the story goes in directions that can’t be anticipated because of the unpredictability of the characters. Even the ones who aren’t crazy.

After eight months of treatment for bipolar disorder in a mental health facility, Pat Solitano (Bradley Cooper) is released into the care of his parents (Robert DeNiro and Jacki Weaver). His intention is to get his life back on track and a large part of that is reconciling with his wife Nikki (Brea Bee) That’s a situation that is going to take a whole lot of work since Pat tried to beat to death the man Nikki was having an affair with and she has a restraining order against him. Pat attends his court mandated therapy sessions with Dr. Patel (Anupam Kher) and tries his best to stay out of trouble. But since he refuses to take his medication that leads him into several situations where it seems as if he may have to go back to the facility.

It’s through his friendship with Tiffany Maxwell (Jennifer Lawrence) whose emotional trauma following the death of her husband caused her to become addicted to sex that Pat sees an opportunity to communicate with Nikki. Tiffany agrees but only under the condition that Pat will be her partner in an upcoming dance competition. I would not dream of telling you how the outcome of a Philadelphia Eagles football game is tied into the dance competition. I’ll only say that it’s a nifty plot twist that I did not see coming and once it did I was grinning like a fool.

And I guess that’s the main thing I can throw at you to recommend SILVER LININGS PLAYBOOK: it’s determination not to be a typical romantic comedy. There is simply no way to predict how the movie will end and to enhance your enjoyment of it, I advise that you don’t even try. Our two main characters have certifiable mental/emotional problems but that doesn’t mean that everybody else in the movie is a model of stability, either. In fact, as I got more of an insight into the history of the relationship between Pat and his father I understood more and more why the father was so patient and understanding of his son’s problems.

The acting in this is top-notch. Bradley Cooper continues to be an interesting actor to watch develop. I enjoyed him in high-octane, big budget franchise movies such as the three “Hangover” movies and “The A-Team” and he’s proven that he can hold his own in character driven dramas such as “The Words.” Here in SILVER LININGS PLAYBOOK he mixes comedy and drama and acquits himself well.

Jennifer Lawrence is flat out terrific in this one but so far I’ve loved her performance in everything she’s done. Even though I couldn’t stand “Winter’s Bone” I always recommend the movie based solely on the strength of her performance which is outstanding. Equally outstanding was her performance in “X-Men: First Class” and while I felt that “The Hunger Games” was just a so-so movie, again she gave the performance that made the whole movie worth watching.

Julia Stiles has a small role in this and I always enjoy seeing her work as she’s just plain fun to watch. I was disappointed that Chris Tucker didn’t have more to do as for once he actually gets to play a human being instead of a live-action cartoon as he usually does in movies like the awful “Rush Hour” series. Robert DeNiro can do no wrong in my eyes and I’m embarrassed to say that I went through the entire movie thinking that the wonderful Jacki Weaver was Sally Struthers until I saw her name in the end credits. 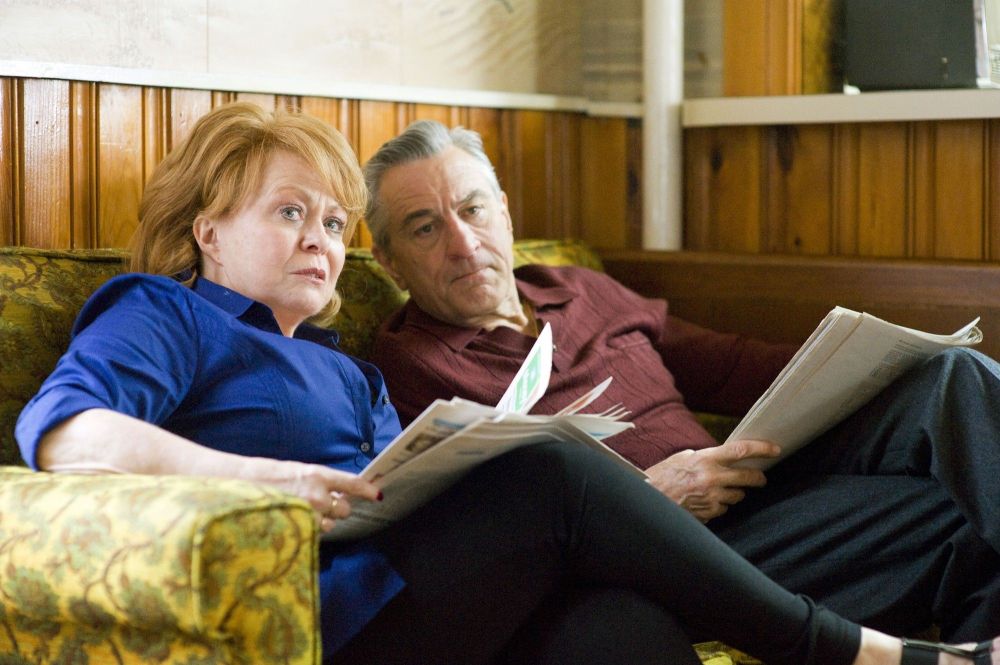 So should you see SILVER LININGS PLAYBOOK? If you want to see a romantic comedy-drama that doesn’t waste your time with boring idiot characters or a story you’ve seen played out in a dozen other romantic comedies, absolutely. It’s a great date movie. Enjoy.