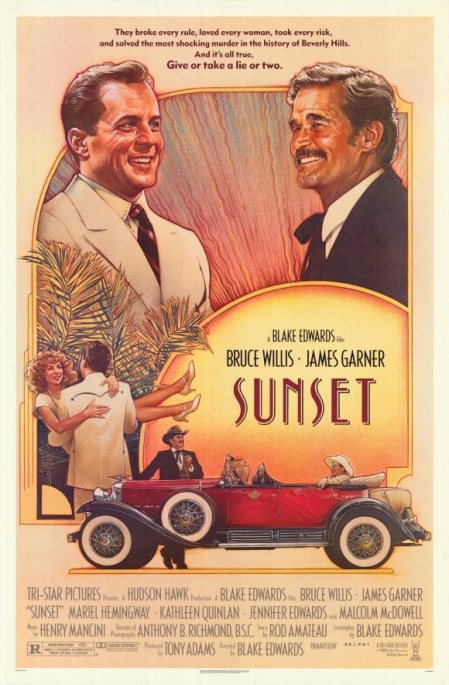 Cinematography by Anthony B. Richmond

Some movies I can just never figure out why they become major hits at the box office while a movie like SUNSET goes virtually ignored. It’s a movie that deserves more of an audience than it’s enjoyed, especially now that there’s such an interest in pulp adventure because that’s exactly what SUNSET is. Pure pulp from start to finish and starring two of the most likable actors in Hollywood history and they know how to play this material the way Liberace knew how to play the piano.

It’s Hollywood, 1929 and the movie industry is making the transition from silent to sound films. Movie producer and studio boss Alfie Alperin  (Malcolm McDowell) wants to make a big epic about legendary United States Marshall Wyatt Earp. Alperin pressures the equally legendary western actor Tom Mix (Bruce Willis) to star in the movie and mostly as a publicity stunt hires Wyatt Earp himself (James Garner) as technical advisor. Now, I’m pretty sure you know something about Wyatt Earp but I don’t know how much you know about Tom Mix. In short, let’s just say that he pretty much defined the image of the Western Hero in movies during the 20th Century. He’s a guy worth doing your homework on as he’s had such an influence on pop culture he’s been featured in novels written by Philip Jose Farmer, mentioned in an episode of “Doctor Who” and has been a supporting character in the DC Elseworlds one-shot “Batman/Houdini: The Devil’s Worskhop.”

Wyatt Earp and Tom Mix actually get along quite well together and that comes in handy because they’ve hardly started working on the movie before they have to start working on a case of murder involving an old girlfriend of Earp’s who’s now married to Alfie Alperin. The case leads them to a high-class brothel owned by Cheryl King (Mariel Hemingway) who makes it clear to Earp right from the start that she’s got a thing for older men. Nudge nudge wink wink. Mix has got his hands full with his own girlfriend Nancy (Kathleen Quinlan) who, like any good girlfriend in a movie of this sort knows a little too much than she should and gets captured one to many times but that’s okay because then we get to see Our Heroes rescue her. 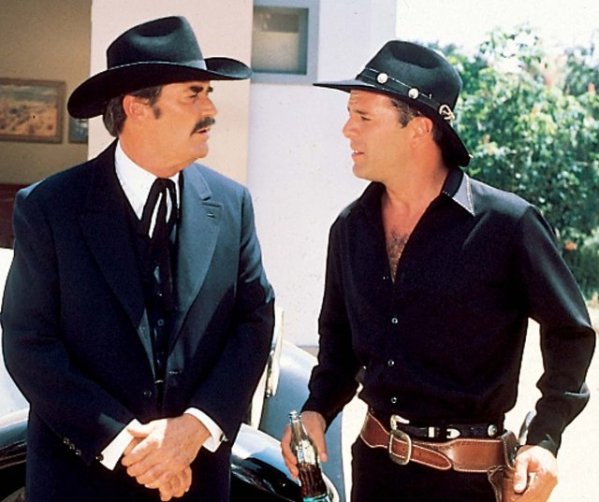 I have a hunch why SUNSET wasn’t a hit in theaters. Given that Bruce Willis was mostly known for his hit TV show “Moonlighting” at the time and James Garner is regarded mostly as a light comedic actor, audiences were probably expecting a comedy romp. SUNSET does have its humorous moments but it’s a straight-up murder mystery that I think Raymond Chandler would be proud of to have written. And it’s as complicated as a Chandler mystery as well. Earp and Mix have to navigate their way through crooked cops and the even more crooked studio executives who pay them off. It’s a pretty dark depiction of Hollywood and a story you have to pay attention to between the fistfights and wisecracks.

Both James Garner and Bruce Willis are plain, flat-out fun to watch. This is the second time James Garner has played Wyatt Earp and he’s great. His Earp is a guy who’s been around and he knows how things work. Especially in a town as corrupt as Hollywood. People see James Garner as mostly a light comedic actor but he can play just as tough as he demonstrates several times in this movie. Bruce Willis as Tom Mix holds his own with his far more experienced co-star and I think it’s because Willis as Mix probably did the same thing Willis in real-life did: he didn’t try to bullshit his co-star. Willis as Mix knows he’s a movie cowboy and doesn’t try to pretend he’s anything other than that. But during the course of their adventure he more than earns the respect of Garner as Earp and I strongly suspect he did so in real life as they worked on this movie. 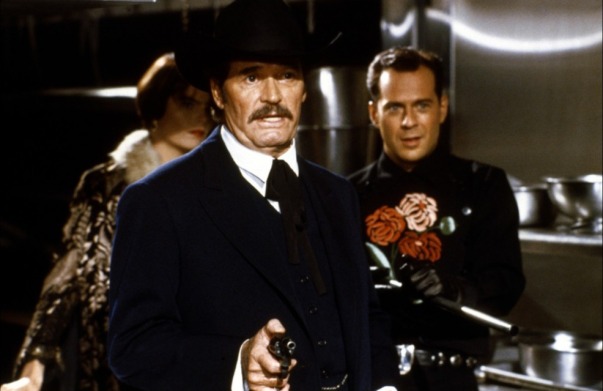 Only thing I didn’t like about this movie? Malcolm McDowell plays a character that’s blatantly based on Charlie Chaplin and given the horrendously monstrous nature of Alfie Alperin the performance leaves a bad taste in my mouth. But he does make for a terrific bad guy, along with E. Emmet Walsh as a crooked studio cop, Richard Bradford as a corrupt police captain and Joe Dallesandro as a mobster.

What else did I like about SUNSET? It’s got two of my favorite and most beautiful actresses of the 1980’s: Mariel Hemingway and Kathleen Quinlan. ‘Nuff said. And there’s terrific music provided by Henry Mancini. Bruce Willis wears this all black outfit with roses that I wish I could wear. But I think he and I are equal in doing the tango. The comradeship of Wyatt Earp and Tom Mix as two genuinely tough guys having an adventure and enjoying it while they build a friendship. The scene of them riding to rescue Nancy. Their gunfight with a bunch of thugs that causes Wyatt Earp to have flashbacks to the O.K. Corral. 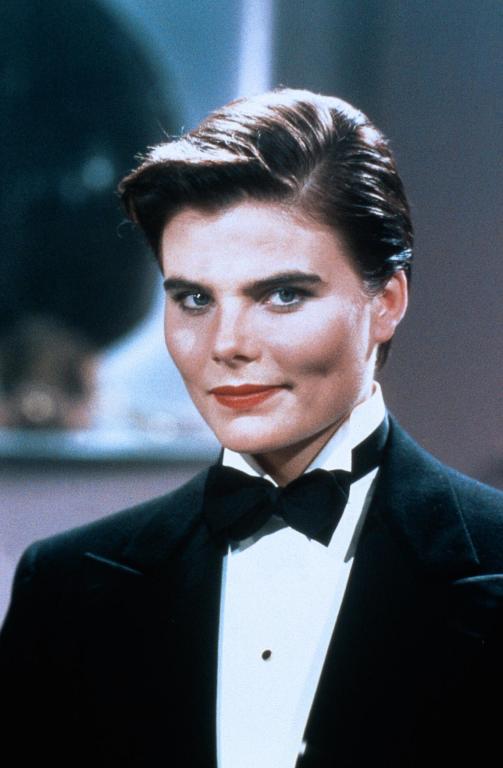 So should you see SUNSET? Absolutely. If you’re a fan of pulp adventure then I’d put this on your must see of movies along with “The Phantom” “Sky Captain & The World of Tomorrow” The Indiana Jones Movies and “The Rocketeer.” The period flavor is perfect, the performances are marvelous and yes, the story takes liberties with historical fact but who gives a damn? As far as you’re concerned, it’s all true.

Give or take a lie or two.