Directed and Produced by Stanley Kubrick

Based on the novel “The Shining” by Stephen King

Hard as it to believe nowadays when THE SHINING is considered to be a horror masterpiece and one of Stanley Kubrick’s finest films that it really wasn’t all that well received when it had its original theatrical run. Don’t get me wrong, it made its money back and in fact did quite well at the box office. But Stephen King said that Stanley Kubrick had taken all the bite out of his story, deliberately downplaying the supernatural elements of the book and the theme of family disintegration caused by alcoholism that were so important and central to the book King wrote. Some critics said the movie’s pace was too slow. Others said that Jack Nicholson and Shelley Duvall were too eccentric and quirky as actors for the roles of Jack and Wendy Torrance. And African-Americans groups called for a boycott of the movie seeing as how the only character to be killed onscreen is Dick Hallorann, played wonderfully by Scatman Crothers.

But over the years THE SHINING has been re-watched, discussed, debated and has emerged a winner.  I don’t think it’s far off the mark for me to say that it’s become to Halloween what “It’s A Wonderful Life” is to Christmas. And whenever lists of The Scariest Movies Of All Time are made, THE SHINING definitely is in the top ten and quite often in the top five.

Mind you, we’re talking about a movie that has no CGI monsters, no gore and no graphically gratuitous violence. But it’s a movie that has been consistently described as downright terrifying. It’s also sparked an immense amount of speculation as to what it’s really about. Don’t believe me? Just for one example check out Rob Ager’s insanely in-depth analysis of THE SHINING. Just make sure you eat something and go to bathroom before you do so. You’ll be awhile reading that sucker, trust me.

Jack Torrance (Jack Nicholson) is an aspiring writer who takes a job as winter caretaker of The Overlook Hotel, an isolated mountain resort located in Colorado. Jack hopes that the isolation of being stuck in the hotel for the winter will help him reconnect with his wife Wendy (Shelley Duvall) his five year old son Danny (Danny Lloyd) and help him battle his alcoholism which has led to physical abuse of his son and emotional abuse of his wife.

Danny possesses psychic abilities and is able to see visions of the past and future. It is through these terrifying visions that Danny knows that The Overlook Hotel is haunted. This is confirmed when during a tour of the hotel,  Danny meets Dick Hallorann (Scatman Crothers) who has powerful psychic powers of his own. Dick calls it “The Shining” and informs Danny that he’s going to see things in the hotel but that they can’t hurt him. Boy, did he call that one wrong.

In the novel version it’s made clear by Stephen King that The Overlook Hotel has achieved some kind of malevolent sentience and lusts after Danny’s power to enhance its own. The Overlook uses Jack to get to his son but in the movie version, it’s clearly Jack that the hotel wants. Danny’s just an afterthought. This gives the movie a whole new slant since it’s not long after the Torrance family arrives at The Overlook that Jack promptly goes crazy.

And it’s here where I can understand the grumbles over Jack Nicholson playing Jack Torrance since the guy looks kinda wacky even before The Overlook starts playing mindgames with him. Even though he’s supposed to be the caretaker we never see him doing any of the maintenance work he’s supposed to be doing. It’s Wendy who does all of that while Jack is having conversations with a ghostly bartender (Joe Turkel) and long talks in the men’s room with the ghost of the hotel’s previous caretaker, Delbert Grady (Philip Stone) who chopped up his wife and two daughters with a fire ax then stuck a shotgun in his mouth and blew his head to pieces.

But let’s face it, you want to get somebody to play crazy in your movie, especially back in the 70’s and 80’s you get Jack Nicholson. Nobody could play crazy so convincingly and yet be so entertaining. There are moments in THE SHINING that are horrifying yet hilarious and Jack Nicholson is firmly at the center of those scenes. Shelley Duvall really doesn’t have much to do but be terrified by her husband for most of the movie and then by The Overlook itself at the conclusion but she gets to have what is without a doubt for me the most blood-freezing moment of the movie when she discovers what her husband has been writing all day long, every day for weeks.

Scatman Crothers has a really nice scene with Danny Lloyd where they talk about their shared ability but let’s be real, in this movie Dick Hallorann’s only purpose is to provide an escape vehicle for Wendy and Danny at the movie’s end.

But outside of Jack Nicholson’s performance, nobody ever really talks about the acting in THE SHINING, good as it is. No, people talk about images that now have become iconic horror classics: the elevator doors that slowly open to release a tidal wave of blood into a hotel corridor. Danny riding his Big Wheel through the hotel. The half-open door of Room 237. Jack sticking his face in the hole he’s just chopped in a locked door and squealing with manic delight, “Here’s Johnny!” Danny running through the hedge maze in the middle of a snowstorm trying to escape his deranged father who is chasing him with a bloody axe. The man in the bear costume. Danny with a huge knife in his hand, writing ‘Redrum’ on a door. The Grady twins who invite Danny to come play with them. The photograph of the 1921 July 4th Overlook Ball. 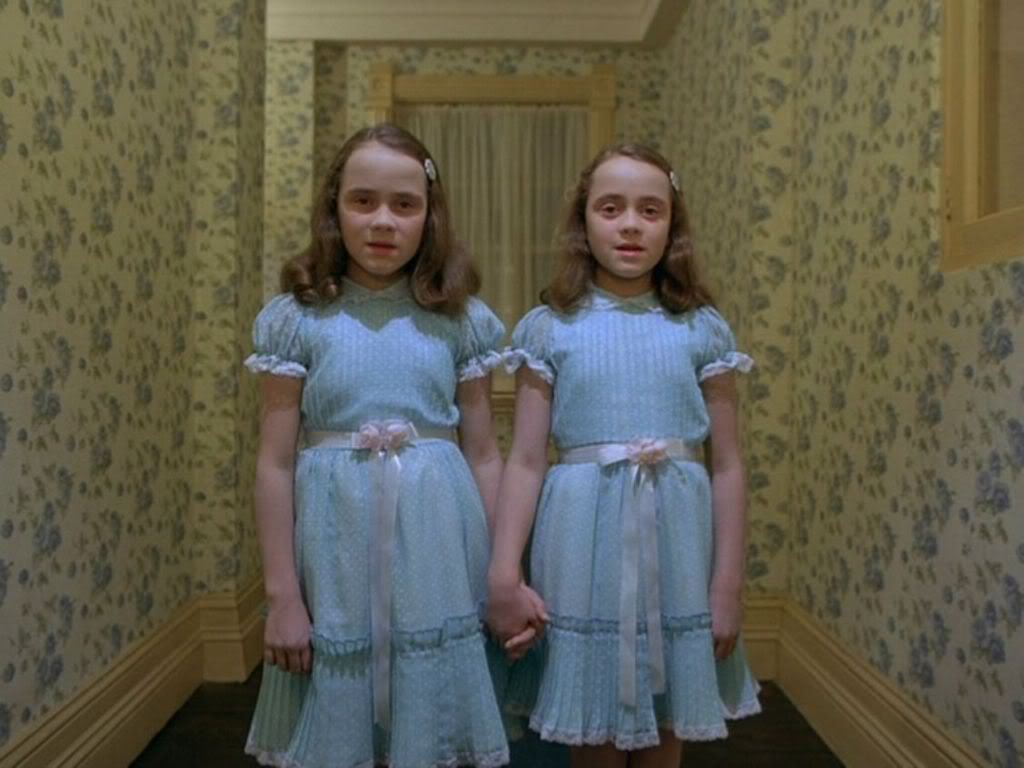 I love haunted house stories and I consider both the book and movie versions of THE SHINING to be right up there with the best of haunted house stories. It couldn’t have a better pedigree than to be directed by Stanley Kubrick who is the last person I would have picked to direct THE SHINING but damn if he didn’t do an excellent job. No, it’s not the book. There’s a tremendous amount of material that Kubrick and his co-screenplay writer stripped away but I didn’t mind. THE SHINING is one of those odd movie adaptations where even though most of the subplots and character exposition is gone, the core of what makes the story work is still there.

So should you see THE SHINING? Chances are you’ve seen it already. I don’t think I know anybody who hasn’t seen it at least once. But if by some chance you haven’t then you’ve picked the best time of the year to catch up. Trust me on this, THE SHINING is a movie that truly deserves its reputation as a horror masterpiece.

9 thoughts on “The Shining”