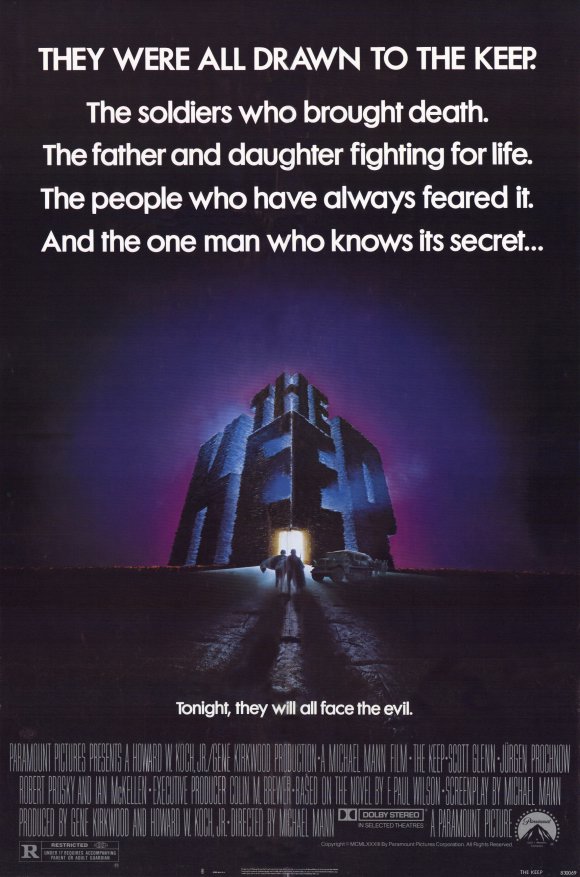 Directed and Screenplay by Michael Mann based on “The Keep” by F. Paul Wilson

Say the name Michael Mann to any reasonably informed movie fan and they’ll most likely rattle off the titles of movies such as “Thief” “Manhunter” “Heat” “Public Enemies.” He’s built up a solid reputation as a director of crime thrillers. As well he should after being the executive director of such classic crime dramas as “Miami Vice” and “Crime Story.” He’s rightfully acclaimed as being one of the best directors actively working today and rightly so. The man knows how to direct a movie. Waitaminnit. Back up and bit. Let me amend that. The man knows how to direct crime thrillers and dramas. I finally got around to watching THE KEEP and while I’m not going to say it’s a totally worthless movie I am going to say that after watching it I know why he’s never made another horror movie. It’s the work of a terrific director, no doubt. But a director who let his art house aspirations for the work get in the way of making a fun horror movie that could have given viewers the screaming fits. Instead, THE KEEP may give you the yawning fidgets.

Certainly the set-up is a fascinating one. A detachment of German soldiers led by Captain Woermann (Jurgen Prochnow) comes to a village located in the Dinu Mountains. The only strategic value the village has is that Russian soldiers could slip through the pass and that’s what the detachment is there to prevent. Overlooking the village is a huge Keep that Captain Woermann takes as his base despite the warnings of the caretaker and his sons who look after The Keep.

The German soldiers are quick to notice the hundreds of crosses embedded in the walls which the caretaker insists are worthless nickel but are actually silver. Two soldiers manage to pry one cross out of a wall, loosening the bricks behind it. Thinking there is more treasure hidden, they crawl inside. Well, you know what happens to noisy folks in horror movies who go where they shouldn’t. 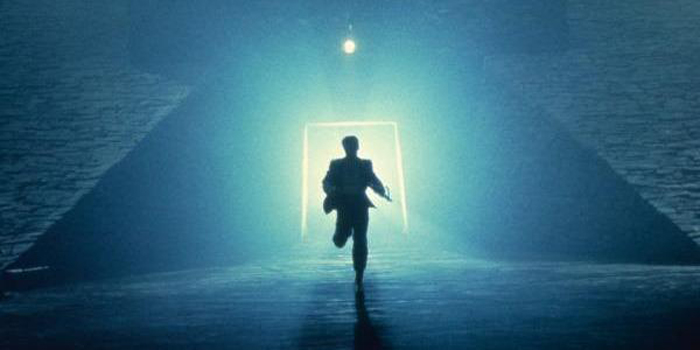 Pretty soon, the soldiers are dying horribly and a detachment of stormtroopers led by SD Sturmbannfuhrer Kaempffer (Gabriel Byrne) arrive to back up Woermann, thinking that it’s simply partisans trying to throw a scare into the Germans. Woermann knows better. He indicates a mysterious message on a wall of The Keep and the village priest advises them to get Professor Cuza (Ian McKellen) out of the local death camp as he’s a noted Jewish historian and linguist and might be able to decipher the message. Cuza’s daughter Eva (Alberta Watson) has accompanied her father and is saved from being raped by two of of the stormtroopers by Radu Molasar (Michael Carter) the demonic entity imprisoned within The Keep. Molasar makes a deal with Cuza: if Cuza will recover a talisman that Molasar needs to regain his full power, Molasar will destroy the Nazis. Seems like a pretty good deal all way ‘round. But nobody as yet knows about a mysterious stranger with glowing purple eyes on his way to The Keep (Scott Glenn) who shares a destiny with the demon trapped inside…

Sounds pretty good, don’t it? I thought so as well and I wish I could wholeheartedly recommend THE KEEP but the fact of the matter is that I can’t. But let me put it this way: If all you’re interested in is mood and atmosphere thick enough to cut with a bayonet, gorgeously creepy sets and stylish cinematography then you’ll want to give THE KEEP at least a try. The movie looks great, no denying that. But great looks do not make a horror movie and this movie has none of that at all. What Michael Mann is going for here is art house, not grindhouse and as a result, there is nothing in the least bit horrifying or scary about THE KEEP. 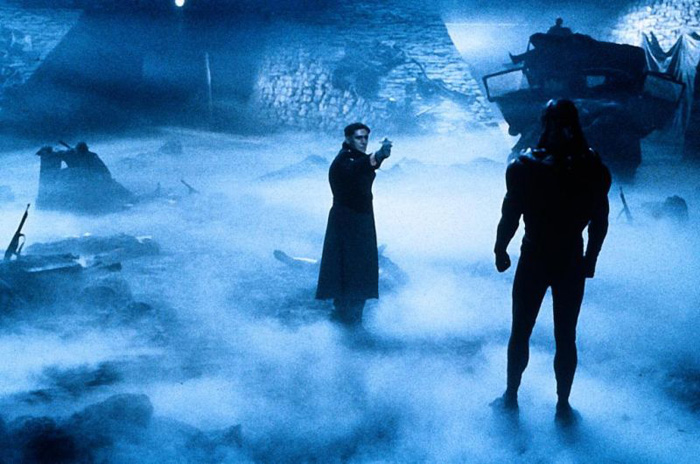 I did like the appearances of Molasar, especially in one scene that is for my money the best special effect in the movie where it appears to Cuza as a creature of living smoke that freaks the old dude out completely and at the end of the movie Molasar has metamorphosed into a form that looks like he could be a distant, darker skinned cousin of The Engineers from Ridley Scott’s “Prometheus.” And the score by Tangerine Dream is marvelous all the way through, especially during a scene where Cuza is racing through the bowels of The Keep with Molasar’s talisman clutched in his hands. 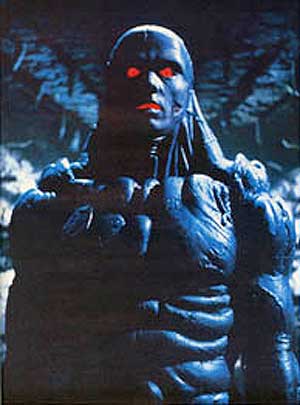 But that’s about it. This is the movie that contains what I think is perhaps the worst performance I’ve ever seen from both Scott Glenn and Gabriel Byrne. Especially Glenn. I couldn’t tell you who he is or what his deal is other than he’s got glowing purple eyes and a stick he carries around with him in a case he won’t let anybody touch. But apparently those glowing purple peepers come in handy for something because five minutes after meeting Eva they’re bumpin’ uglies. And it happens just as I describe. Really. They meet, exchange one minutes worth of dialog and whoomp, there it is.

So should you see THE KEEP? If you can find it then I don’t see the harm in checking it out. You can have it playing in the background while you’re folding laundry or scraping your bunions or whatever and not worry about missing a thing. It’s a pretentious exercise that sacrifices everything that a good horror movie should have. Visually, it’s always engaging. But that’s really all the movie has going for it. Watch at your own discretion.

3 thoughts on “The Keep”