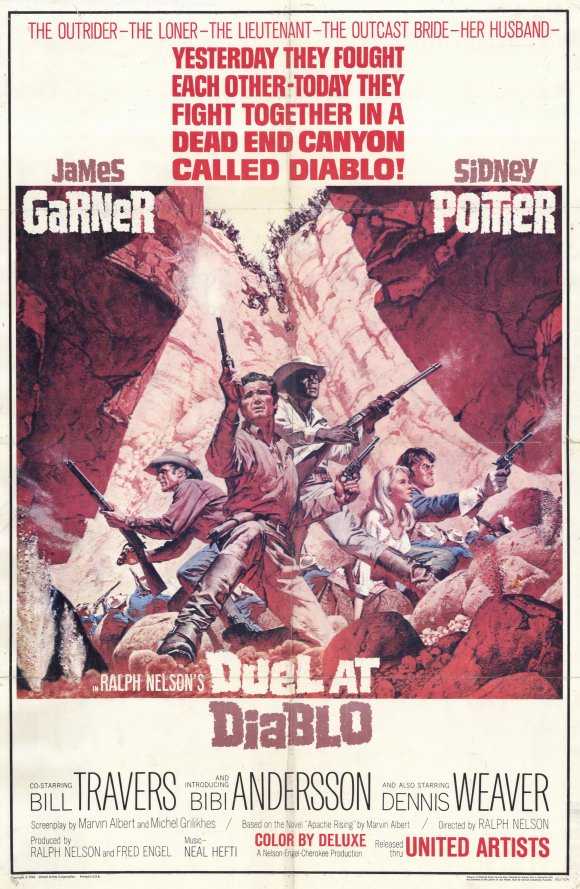 Written by Marvin H. Albert based on his novel “Apache Rising”

DUEL AT DIABLO is one of those westerns that when I mention it even to fans of westerns I get a blank look and a “say wha?” It’s one of those movies that appear to have been long forgotten even though it stars three of the best loved and most popular actors to have worked in Hollywood: James Garner, Sidney Poitier and Dennis Weaver. But even fans of those stars seem to have never heard of the movie and that’s truly a shame because DUEL AT DIABLO, while not a masterpiece of the genre is a damn good western for a number of what I believe to be strong reasons and we’ll get into those after a summary of the plot:

Army scout Jess Remsberg (James Garner) while on patrol out in the desert comes across the hideous remains of a man brutally tortured by the Apache.  On the trail of those Apaches Remsberg rescues a woman from them. Not only is Ellen Grange (Bibi Andersson) not grateful to be rescued she actually was looking for those Apaches for reasons that will become quite important to the plot later on. Remsberg returns Ellen to her husband Willard Grange (Dennis Weaver) who is more upset that the horse his wife had taken is dead than anything else. 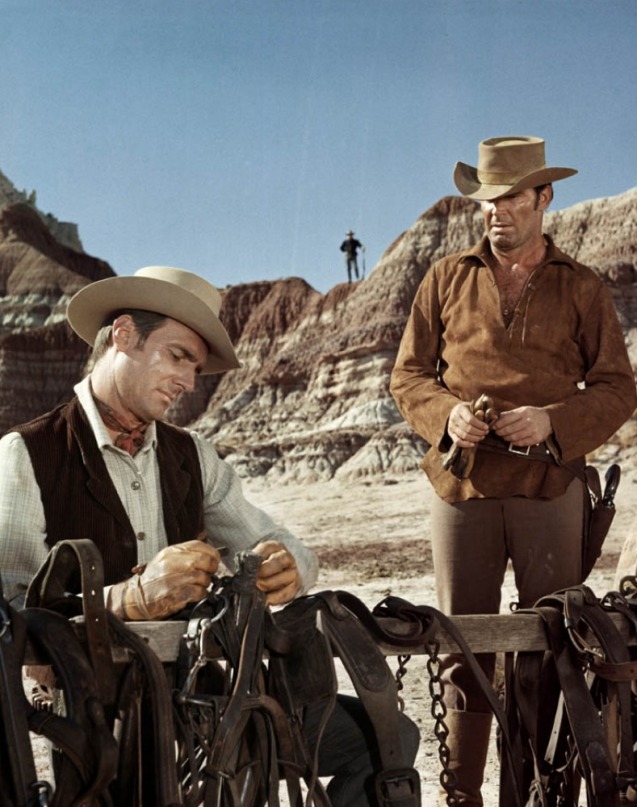 But Remsberg has his own problems to think of as he finds out from his old friend Lieutenant Scotty McAllister (Bill Travers) that his Comanche wife was murdered and scalped. McAllister doesn’t know who did the killing but he knows where there is a man who can point Remsberg in the right direction. But he won’t tell Remsberg the name until he agrees to scout for him. McAllister has to escort a unit of twenty-five inexperienced soldiers green as Christmas trees to Fort Concho and McAllister badly needs Remsberg to help him get them there. Once at Fort Concho, McAllister agrees to give Remsberg the name of the man. Willard Grange goes behinds McAllister’s back to get permission to accompany the unit to Fort Concho with his supply wagons.  This doesn’t make McAllister happy at all but the guy who’s really pissed off is Toller (Sidney Poitier) a veteran of the 10th Calvary Buffalo Soldiers who was contracted to provide forty horses to the army. Toller has only broken half of the wild horses and he won’t be paid for the other twenty unless he goes with the unit and breaks the horses on the way. 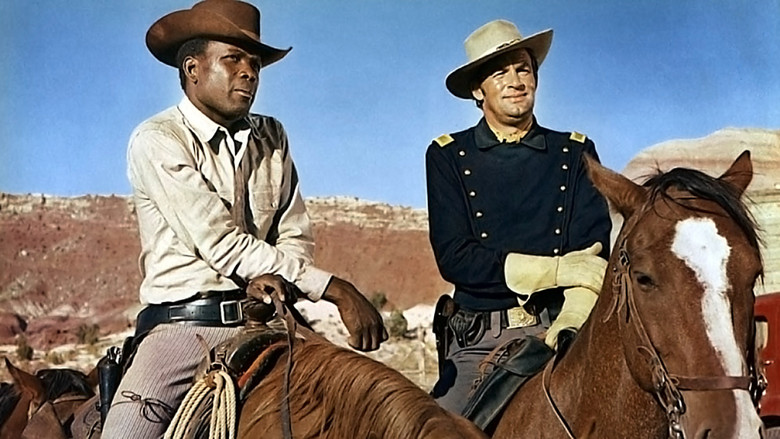 Once the unit gets on the move they quickly find themselves in one hell of a mess. The local Apache chief Chata (John Hoyt) has gone on the warpath and the unit must pass right through his territory. He targets the unit as one of Grange’s wagons is filled with ammunition and because Ellen Grange has the one thing he cares the most about: his grandson, the child Ellen Grange had with Chata’s son when she was held captive by the Apache.  Ambushed by the Apache, the badly outnumbered and inexperienced soldiers must somehow hold out at Diablo Canyon while Remsberg attempts to evade the Apache and ride to Fort Concho to get help before they’re wiped out.

DUEL AT DIABLO has a lot of selling points that I think make it worth your time to watch and here’s number one: we’ve got three of the most likeable actors in Hollywood. They’re all known for playing easy-going guys full of warmth, charm and with strong moral and ethical souls. Not in this picture. Garner, Poitier and Weaver play three men who are hard, brutal, violent and in a lot of ways downright unpleasant. Matter of fact, in the first thirty minutes of the movie Garner, Poitier and Weaver threaten to kill one or the other at least once and there’s a tense moment later on when Poitier and Weaver face off for a gunfight. I recently watched the movie a few days ago and I don’t think I can recall a single moment where any of them even so much as smiles. It’s a radical departure for them as actors and I enjoyed watching the three of them enjoying playing against type. Especially James Garner. If you had never considered him a badass before, you will after seeing this movie. I really like his look in this movie. From start to finish he’s unshaven, sweaty and appears to have not taken a bath in weeks nor does he appear to give a damn. 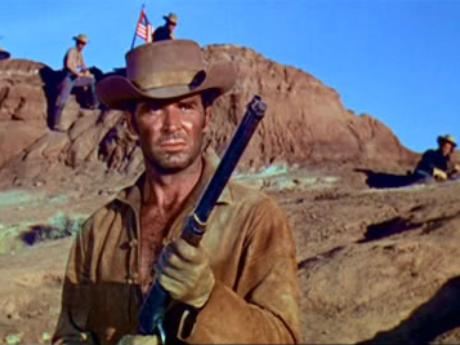 DUEL AT DIABLO also may be the first American western where elements and style of the growing Spaghetti Western genre were being used. Like Spaghetti Westerns, there’s nobody in this movie who is entirely good or bad. We understand why everybody is doing what they’re doing or acting the way they do even if we don’t agree with it or like it. The locations, set design and photography are very much like Spaghetti Westerns as well as the violence which is really brutal at times. We’re not talking Sam Peckinpah level slaughter here but it is a harshly realistic depiction that I don’t think one expects to see in a pre-“The Wild Bunch” American made western.

What else did I like? I like how Toller’s ethnicity was never pointed out or made an issue. Even though McAllister and Toller don’t get along it’s due to their differing opinions on how things should be done, not because Toller’s a black man. I like how Ellen Grange and Scotty McAllister have distinctive accents. All too often I hear movie fans complain about characters having accents and I think that’s a highly insensitive and downright ignorant to say. Especially when it comes to Westerns where I’m betting you couldn’t walk twenty feet in any direction without hearing half a dozen different accents as everybody and their mother were coming to America to make their fortune. Having character with accents in Westerns reminds us that this is a country of immigrants. Something that we all need to be reminded of once a while. I also liked the music score which also sounds more like a score you’d hear in a Spaghetti Western.

So should you see DUEL AT DIABLO? Absolutely. The movie has excellent performances and a great story. Right from the start when a huge, bloody Bowie knife slashes a X through the United Artists logo, DUEL AT DIABLO is promising it’s not like your usual Western. And it delivers on its promise.

2 thoughts on “Duel At Diablo”