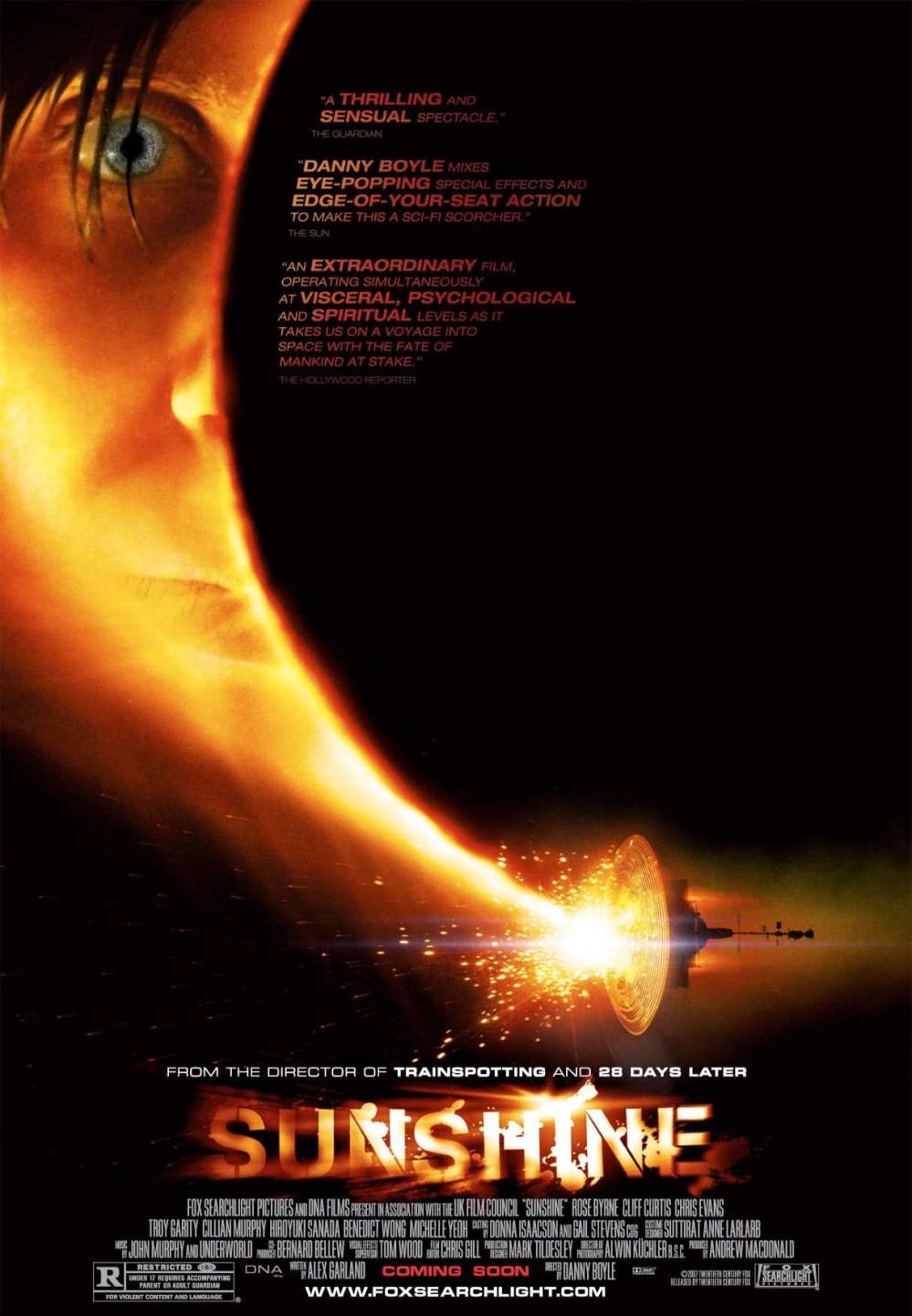 My wife Patricia got turned onto Danny Boyle when she insisted on seeing “28 Days Later” when we were on vacation in Florida.  She loved the movie, mainly because she’s a big fan of Doomsday Movies anyway.  Give her a movie where the world is going to hell and she’s sitting in the theater with a big ol’ grin on her face.   Sometimes I worry about her.  But I digress.  She would give me no peace until we saw “28 Weeks Later” which she also loved but I think she may have cooled on Danny Boyle with SUNSHINE.  Not that it’s a bad movie.  Not at all.  It’s extremely well made, the acting is solid and the special effects are state of the art.  But SUNSHINE starts out as one thing then turns into another and along the way there are so many references and homages to other science fiction movies that I’m afraid I spent more time thinking about all the other movies SUNSHINE reminded me of rather than concentrating on the actual movie itself.

It’s the year 2057 and The Earth has entered a new Ice Age (a pox on you global warming fanatics, say I!) and the nations of the world have pooled their remaining resources to build The Icarus II, a giant spaceship carrying a thermonuclear bomb the size of Manhattan.  The idea is to drop it in the sun and re-ignite the sucker.  Earth has already sent one spaceship:  The Icarus I on the same mission seven years previously but they never accomplished it as all contact was lost.  If Icarus II doesn’t succeed Earth has no more resources for an Icarus III so this crew had better get it right.

There are only eight crew members: Capa (Cillian Murphy) who designed the bombs.  Captain Kaneda (Hiroyuki Sanada)  Navigator Trey (Benedict Wong) Pilot Cassie (Rose Byrne).  The psychiatrist Searle (Cliff Curtis) Communications/First Officer Harvey (Troy Garrity) Engineer Mace (Chris Evans) and the botanist Corazon (Michelle Yeoh) who tends the ship’s hydroponics oxygen garden that helps recycle the air.  They’ve formed a strong bond in the time they’ve been together due to the urgency of their mission.  A mission that after 18 months is reaching its end.  But everything is changed by their receiving a distress signal from Icarus I which has been locked in orbit around Mercury all these years.  The decision is made to rendezvous with Icarus I in order to secure their bomb and therefore drop ‘em both into the sun.  The idea being that two huge honkin’ bombs will be better than just one.

Now obviously none of these crew members have ever seen “Alien” or they would have known what happens when you deviate from your mission profile.  Things go horribly wrong.  And so they do for the crew of the Icarus II.  It’s just one damn thing after another as the crew makes mistakes that result in them losing much of their precious oxygen.  So much in fact that it’s doubtful that even if they complete their mission they’ll be able to get back to Earth.  They get aboard the Icarus I and find that the crew, following ‘God’s will’ destroyed their computer, disabled the bomb and committed mass suicide.  The navigator makes a crucial error that results in the death of a crew member and he goes suicidal.  In fact, for every mistake the crew makes, somebody dies.  Valiantly they go on with their mission but their chances of completing it get even smaller as it soon becomes apparent that something from Icarus I has come onboard the Icarus II and this something is more than willing to help the already frightened crew of the Icarus II die.

The first half of SUNSHINE reminded me of a couple of other science fiction movies: “2001: A Space Odyssey”  “2010” “Solaris” and most notably “Silent Running”.  There’s also heavy “Alien” influences, including a scene with the Icarus II crew sharing a meal together that is so much like a similar scene from “Alien” that I’m convinced they’re using the same utensils from that earlier film.  And I was even more reminded of “Alien” in the second half of the movie where the crew has to fight for their lives against a hideously bloodthirsty entity that is bent on killing them off.   But it’s that second half that threw me off as I was really enjoying the first half of the movie.

Let me explain: back when I was growing up, the term ‘Science Fiction Movie’ meant something quite different from what it means now.  Somewhere around the time “Predator” hit the screens, science fiction movies mutated into action thrillers with science fiction elements tossed in for flavor.   But before then, science fiction movies were a totally different animal.  And I think that with SUNSHINE Danny Boyle and his writer Alex Garland (who I understand is a legitimate science fiction writer) were trying to do an honest-to-Arthur C. Clarke-science fiction epic with solid characterizations.  But I don’t think they had they conviction to go all the way through with it as they turn the last half of the movie into a bloody carnage of mayhem and murder when in the first half they’d set it up so well that the crew’s problems were caused by their own human failings.

I’m never going to warm up to Cillian Murphy, I guess.  I liked him well enough in “28 Days Later” and “Batman Begins” but I’m not about to break my hump rushing out to see a movie just because he’s in it.  I was much happier to see Michelle Yeoh here.  Having been a fan of hers since I saw her co-starring with Jackie Chan in “Supercop” I was pleased to see her in a role where she had a chance to do some acting and not just kick ass every ten minutes.  Chris Evans is probably my favorite actor in this movie as he’s the obligatory Only Guy Who Makes Sense.  You know what I’m talking about.  In a movie of this sort there’s always one guy who knows what he’s talking about and always tells the others: “Well, if we do this, we’re going to screw up.” They don’t listen to him. They screw up.  Then they come to him to pull their collective asses out of the pit of alligators they’ve fallen into.  Which he does so only so he can say; “I told you so”  It also tickled me to death that the guy who plays The Human Torch in the “Fantastic Four” movies is on a mission to reignite The Sun.

So should you see SUNSHINE?  I would say yes if for no other reason than it’s an interesting throwback of a film to a time when science fiction movies were more about ideas, concepts and characterizations than eye-popping action sequences.  I liked how the scientist characters in this movie acted like scientists and not action heroes.  I’m not sure if the ending worked for me but then again, I’m not sure I understood the ending.  It’s got all the right elements that a good science fiction movie should have.  I just wish it hadn’t changed gears so abruptly halfway through the movie and had the courage to continue on with its theme of human fallibility in the face of cosmic finality rather than turning into a big-budget remake of “It Came From Outer Space” in the clutch.