POM WONDERFUL PRESENTS: THE GREATEST MOVIE EVER SOLD may just be The Greatest Documentary Ever Made.  And here’s why.  Imagine that a magician like David Copperfield is going to perform the most amazing illusion you’ve ever seen.  But before he does the trick he breaks it down and explains to you in every single detail exactly how he’s going to do it.  After that, he goes ahead, performs the illusion and your mind is still totally blown at what you’ve just seen even though you know how he did it.  POM WONDERFUL PRESENTS: THE GREATEST MOVIE EVER SOLD is kinda like that.  Morgan Spurlock sets out to make a movie about product placement in movies by getting advertisers and marketing agencies to finance the movie.  Some corporate executives are quite simply gobsmacked when Spurlock comes into their offices with his storyboards and his pitch.  “Lemme see if I got this straight,” one of them says. “You want to make a movie about product placement that is paid for with product placements?”

That’s exactly what Morgan Spurlock wants to do and he does it in a manner that is so goofy that this documentary easily qualifies as a comedy in my eyes as during one encounter after another Spurlock explains his concept and is met with either outright astonishment, derision or really excited enthusiasm.

He doesn’t go into this completely blind.  He interviews directors such as J.J. Abrams, Quentin Tarantino, Peter Berg and Brett Ratner to find out how they feel about the demands studios place on them for product placement and what he should expect going into those types of meetings.  I found their honest opinions about it quite refreshing,  especially Brett Ratner who says bluntly that studios only care about two things when it comes to movies: “How much is it going to cost and how much is it going to make?” and that’s why they welcome product placement to help them pay for a movie.  Spurlock’s conversation with Ralph Nader about truth in advertising gave me some the best laughs in the movie as Mr. Nader is one of those people who are at their funniest when they’re not trying to be funny.

Some companies turn Spurlock down in a New York minute.  Some never even return his calls.  Others jump into the project wholeheartedly like POM Wonderful who kicks in a cool million simply to have their name in the title of the movie.  The rock band OK Go gleefully agrees to provide a theme song, naturally titled “The Greatest Song I Ever Heard.”

And the free stuff that Spurlock gets from the participating companies is mind-boggling.  He gets not one, not two, but six Mini-Coopers.  JetBlue lets him fly free. Hyatt lets him stay in their Executive Suites. Sheetz lets him pump free gas into his free Mini-Cooper.  Old Navy gives him truckloads of clothing.  It’s crazy.  But he’s getting away with it as he’s showing us exactly what these companies are willing to do just to insure their product and their company name is in a movie. 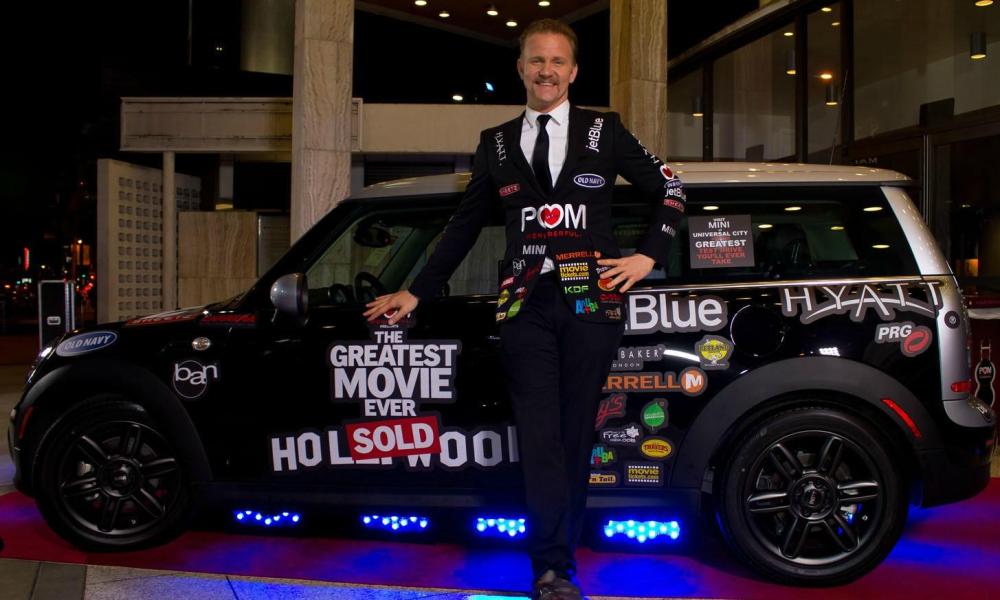 I wasn’t all that crazy about Morgan Spurlock’s first movie, “Super Size Me” as it seemed like a pretty pointless stunt to me.  I mean, even if you eat nothing but salad everyday it’s still going to have a detrimental effect on your body.  And I don’t need to watch a 90 minute documentary to tell me that eating McDonald’s fast food everyday isn’t good for me.  Tell me something I don’t know.  I enjoyed his short-lived FX series “30 Days” much more.  Every episode had either Spurlock or some other person spending 30 days living a lifestyle they were completely unfamiliar with, such as a Christian living as a Muslim.  It was a show that truly educated and it was a shame FX cancelled it.  If you can find it streaming anywhere, by all means check it out.

But POM WONDERFUL PRESENTS: THE GREATEST MOVIE EVER SOLD I can recommend totally and completely.  Morgan Spurlock’s enthusiasm for the project is infectious and the reactions of the various corporate executives and their negotiations for their products are funnier than anything that could have been scripted.  It’s a documentary that doesn’t preach, doesn’t beat you over the head with a message until your ears bleed (I’m looking at you, Michael Moore) but gets its point across while it’s entertaining you at the same time.  Highly recommended.

One thought on “POM Wonderful Presents: The Greatest Movie Ever Sold”