Based on “Iron Man” created by Stan Lee, Don Heck, Larry Lieber and Jack Kirby and published by Marvel Comics

When I was growing up and my friends and I devoured Marvel Comics as fast as we could get ‘em, all my friends liked Spider-Man.  Which I could never understand.  Spider-Man was a nerdy loser who was always broke, never got the girl, was picked on unmercifully at school and things just never seemed to work out for him.  Which is what my life was like at that stage of my evolution.  So I could never fathom why I would want to read a comic about somebody whose life was as crappy as mine.  Hell, I didn’t have to read comics to know that life wasn’t fair.  I lived it.  I wanted to be Tony Stark.  Now that guy had the life.  Billionaire technological genius.  Brilliant inventor.  Had so many fine women he tripped over ‘em constantly.  Fleets of sports cars and private planes.  Let a team of superheroes live in his mansion and bankrolled their operation.  All that and he had the world’s most powerful weapon: a suit of hi-tech armor that turned Tony Stark into the greatest fighting machine on the face of the Earth: IRON MAN.  Watching the movie  brought back a whole lot of feelings for why I fell in love with the character years ago.  And a lot of that has to do with the outstanding performance of Robert Downey, Jr. the direction of Jon Favreau and the excellent screenplay.  Everybody involved with this movie obviously took time to do their homework and read the comics because what’s up there on the screen is extremely close to the tone and spirit of the comic books.

Tony Stark (Robert Downey, Jr.) is delightfully enjoying his blatantly hedonistic lifestyle filled with women, liquor and trips around the world at a moment’s notice.  He’s babysat by his BFF Air Force Colonel James Rhodes (Terrance Howard) and his loyal Girl Friday Pepper Potts (Gwyneth Paltrow) who both worry and fret over Tony like Jewish grandmothers.  But Tony assures them there’s nothing to worry about, that’s he’s got it all under control.  Except when Tony has to demonstrate his latest weapon of mass destruction, the fearsome Jericho missile system in Afghanistan.  His armed escort is wiped out and Tony himself is captured by the terrorist group known as The Ten Rings who demand that he build the Jericho for them.  Complicating the situation is the fact that Tony has a chest full of shrapnel that ironically came from a bomb his own company built.  With the aid of a fellow captive (Shaun Toub) Tony is not only able to construct a device to keep the shrapnel away from his heart but also to build a crude but highly effective suit of iron armor that enables him to get away from his captors.

Not that his situation back in the United States is much better.  Tony’s business partner Obadiah Stane (Jeff Bridges) doesn’t like it at all when Tony has a moment of clarity and announces that Stark Enterprises will no longer manufacture munitions.  Even Pepper and Jim Rhodes wonder if this is for real or some sort of publicity stunt on Tony’s part.  But Tony is quite serious.  So serious that he seals himself up in his basement workshop and proceeds to improve upon his armor design.  And he’s going to need it, especially when The Ten Rings find his crude prototype armor in the desert and begin piecing it back together.  But they need help to upgrade and improve the armor.  And that forces Tony Stark to come to terms with who has been and what he wants to be in the future.

While I thought IRON MAN was simply outstanding I can’t shake the feeling there’s going to be those who will complain that like the Ang Lee directed “Hulk” IRON MAN doesn’t have enough action.  But the movie isn’t so much about action as about Tony Stark understanding what he’s become and his desire to be better than what he has been.  To leave a legacy other than one of death and destruction.  And the wonderful thing about Tony Stark is that he’s just as badass and cool when he’s out of the armor as when he’s in it.  He’s not like a Superman or Batman in that their alter egos are radically different from their superhero personas.  Tony is a man used to using technology to accomplish his goals and that’s what the armor is: another piece of technology that enables him to save lives instead of taking them.  And if you want another reason for why this movie isn’t action heavy…well, actually Tony Stark doesn’t become Iron Man until the end of the movie.  This is very much an origin story and it’s a really good one.  The motivations are there, the characterizations are there and as Tony learns about the capabilities and potential of his latest creation we’re right there with him. 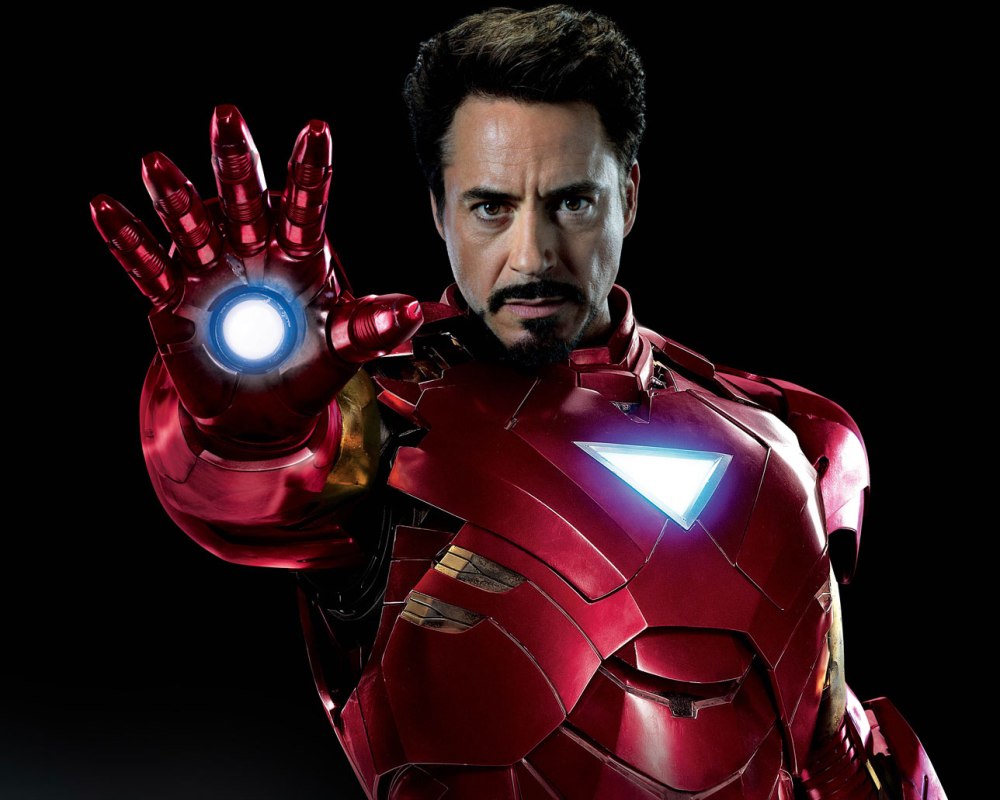 Robert Downey, Jr. owns Tony Stark/Iron Man much in the same way that Michael Keaton owned Batman/Bruce Wayne and Christopher Reeve owned Superman/Clark Kent. Downey and Favreau understand that if we don’t care about Tony Stark when he’s out of the suit we sure as hell won’t care for him when he’s in it. Downey’s Tony Stark is certainly a major prick in the first hour of the movie but he’s one of those charming pricks who can make you love him even while he’s screwing you over.  This is another terrific performance from one of my favorite actors and it’s really fun watching Downey at work.  Gwyneth Paltrow radiates sexy intelligence as Pepper Potts and the scenes between her and Downey are really great.  Terrence Howard could have had more to do as Jim Rhodes but he does have a nice little bit in Tony’s workshop when Rhodes looks at one of Tony’s prototype armors that is a foreshadowing of the bigger role the Rhodey character has in the two sequels.  Surprisingly enough, the only actor I have a problem with is Jon Favreau who cast himself as “Happy” Hogan, Tony Stark’s driver.  Since he’s also the director Favreau gives himself way too many scenes where Hogan is standing around looking over Stark’s shoulder looking all serious but not really contributing anything to the scene or the story overall.

The special effects are outstanding.  There were a lot of scenes where I’m positive I wasn’t looking at CGI but at a man in a suit of hi-tech armor.  But after awhile I gave up trying to figure out when Iron Man was CGI and when he wasn’t and just sat back to enjoy the ride.  I dunno about you but I enjoy watching a superhero movie where the superhero is actually enjoying using his powers for good and there’s a definite sense of fun and adventure.  That’s not to say that IRON MAN doesn’t have its darker moments but the wit and intelligence of the characters and the story lifts it out of the “oh, I have such a burden to bear…woe is me” bag that most superhero movies are in.  These characters don’t have time to sit around and moan about how bad their lives are.  They’re smart enough to get up and do something about it.

Jeff Bridges almost steals the show as Obadiah Stane and Clark Gregg is quietly hilarious as Agent Phil Coulson.  In fact, one of the most amazing things about the Marvel Movie Universe is how Clark Gregg/Agent Coulson became the MVP of the MMU.

So should you see IRON MAN?  If you haven’t already I don’t know what’s wrong with you.  It’s a really smart, fun movie with engaging characters and a bedrock solid plot.  The writers have done a great job updating Iron Man’s origin and I applaud them for not shying away from portraying Tony Stark as what he is: a weapons manufacturer with all the ramifications that go along with that profession.  IRON MAN doesn’t get heavy into the politics but just enough to give the story added weight.   IRON MAN has rightly earned its place as the crown jewel of Marvel movies.  It, along with “Captain America” the two “Thor” movies, the two “Hulk” movies and of course the magnificent “Avengers” are the Marvel superhero movies I’ve been dreaming, hoping and praying to see ever since I was ten years old and I’m glad I’ve gotten to see them.