Based on “Game Change” by John Heilemann and Mark Halperin

Anytime and every time I watch a movie that is based on incidents that actually happened or that starts off with the words; ‘This Is A True Story’ I immediately start thinking of bovine excrement.  Because for me, unless somebody was right there with a camera at the moment that it happened, you’re not accurately documenting events as they actually happened.  And even then, documentaries can be edited to reflect the attitudes, prejudices and politics of the filmmaker (I’m looking at you, Michael Moore) But even that’s all right with me.  We’re human beings and I don’t think that any of us can be truly and completely objective about anything that we passionately care about.  And that includes politics.  A subject that in the past decade has polarized this country in a way none of us have ever been seen before and probably never dreamed could happen.

My point being that I can’t take movies based on true events  entirely seriously.  They’re made long after the fact when people have had time to analyze, scrutinize, discuss and dissect what happened and why.  Factor in that everything everybody remembers or doesn’t remember is flavored by their emotional, mental and even physical condition before and after adds up to too much of a gap for me to accept everything presented in a movie based on true events in good faith.  But that was before we entered the age of YouTube, CNN, TMZ and two dozen 24-hour news channels.  This is pointed out by McCain Campaign Chairman Steve Schmidt (Woody Harrelson) to Sarah Palin (Julianne Moore) early on in GAME CHANGE and he’s right on point.  The 2008 Presidential Election was without a doubt the most compelling and important election in American history as it was the election that saw an African-American man elected President of The United States.   It was played out in public in a way that elections never had been before thanks to the communication and social media that now dominates and in so many ways infects our society. 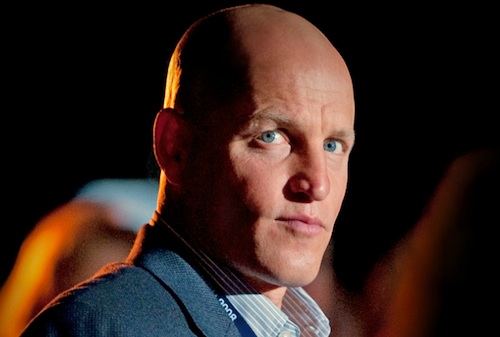 And it also gave us Sarah Palin, former governor of Alaska who was picked by Senator John McCain’s staff to be his running mate.  Both are still with us and if GAME CHANGE teaches us anything is that even if Sarah Palin didn’t become Vice President of The United States, she still won.  Presidential hopeful Senator John McCain (Ed Harris) is losing the race and he knows it.  In desperation he calls up genius political strategist Steve Schmidt and begs him to come on board his team and save his campaign.  Schmidt’s plan is to find a running mate who can compete with the rock star popularity and megawatt charisma of Barack Obama.  Campaign Manager Rick Davis (Peter MacNicol) thinks he’s got just the thing: Alaska Governor Sarah Palin who appears to have all the qualities they need and more.

She’s a married mother of five, everybody loves her, she’s accessible, she’s extraordinarily popular and it certainly doesn’t hurt that even after having five kids she’s gorgeous and looks wonderful on camera.  The problem is that she is woefully unprepared for the job.   She’s devastating in public appearances where she demonstrates a rock star personality equal to Barack Obama’s.  She’s spectacular when giving a speech.  But in horrendous one-on-one interviews with the press it’s as obvious as a slap upside the head that she doesn’t know a thing about domestic and foreign policy.  She’s ignorant of basic government practices and information that fifth graders know.  She can’t even name a single newspaper even though she claims to read “a lot of them every day” She makes statements that are blatantly untrue. And it soon becomes clear to Schmidt, Davis, McCain speechwriter Mark Salter (Jamey Sheridan) and Senior Advisor Nicolle Wallace (Sarah Paulson) that they’ve been given the mother of sow’s ears and they have absolutely no idea of how to turn it into a silk purse.

I wish that HBO had went ahead and made a whole mini-series based on the book as it deals with a whole lot more than just the McCain/Palin campaign which actually is only one section of the book.  But that’s a small quibble.  Taken purely as drama, GAME CHANGE is worth seeing just for the really strong cast that sells the story.  Ed Harris, Woody Harrelson, Jamey Sheridan, Peter MacNicol, Sarah Paulson and Ron Livingston are all great here.  And as Sarah Palin, Julianne Moore looks and sounds so much like her that it’s downright scary.  And while it would be easy for the movie to give us the Tina Fey version of Sarah Palin, the movie is remarkably fair in its depiction of her.  We see the opportunistic Sarah Palin who suddenly found herself thrust onto the world stage and promptly milked it for all it was worth.   But we also see the frightened and very much out of her league Sarah Palin who starts out as a goldfish among sharks but quickly learns how to be a barracuda.  I also liked how the movie showed the many times when John McCain was urged by his staff to run a dirty, mud-slinging campaign and refused.  As played by Ed Harris he comes across as a man of dignity and honor.

It wouldn’t take much for GAME CHANGE to have been pushed into a full-blown political satire as it comes awful close at times.  And through the use of today’s technology which enables the actors to be flawlessly inserted by digital black magic into archival footage, the line between fact and fiction is erased far too well, if you ask me.  Well worth your time to watch if you have HBO.  And if you don’t, be sure to look for it on DVD or Netflix.

There’s no rating for GAME CHANGE.  While there is no sex or violence in the movie, be advised that the f-bomb is dropped numerous times.