Based on the novel by Sol Yurick

The one Walter Hill movie that everybody can agree on that they love without reservation whatsoever is his 1979 masterpiece THE WARRIORS.  Walter Hill took equal parts of the western, comic books and Greek literature, threw them in a blender and poured this movie out onto the screen.  It’s a tribute to his skill as a director that the movie is still as well known today as when it first had its original theatrical.  Just mention THE WARRIORS to most people, even if they aren’t movie fans and they know it.  Practically everybody I know has seen THE WARRIORS  at least two or three times and if you mention it as a favorite of yours they  will either throw their arms open like Cyrus and howl: “Can You Dig IT?” or imitate David Patrick Kelly: “Warrrriors….come out to playyyyy-aayyyyyy….”

THE WARRIORS takes place in a New York that is overrun by gangs.  Originally, Walter Hill wanted to have a subtitle saying: “Sometime In The Future” but I think he should have set the movie in the alternate world urban jungle of “Streets Of Fire” since this New York has little in common with the New York of our world.  It seems almost entirely populated by gangs and cops and we see almost no regular Joe or Jane Punchclocks in the film.

A charismatic gang leader, Cyrus (Roger Hill) of The Gramercy Riffs has summoned representatives of every gang in the city to come to a meeting in The Bronx.  During a massive rally where Cyrus comes across as a Malcolm X of gangdom, he outlines his plan: collectively, the gangs outnumber the cops nearly five to one.  If they all stop fighting over each other’s  little piece of turf and join forces, the entire city of New York can be theirs   The gangs are behind Cyrus and his plan but he is shot and killed by the psychotic Luther (David Patrick Kelly) of The Rogues.

The gang rally is raided by the NYPD and using the confusion to his advantage, Luther places the blame the killing of Cyrus on The Warriors.  The Warrior leader Cleon (Dorsey Wright) is jumped and killed by The Gramercy Riffs while the remaining Warriors have no choice to run for their lives with every gang in New York as well as the cops after them.  This means they have to battle every mile of the way from The Bronx back to their home turf of Coney Island in Brooklyn using the subway for transportation.

Now take it from somebody who has lived in New York all their life and this is no lie: You can take an airplane from New York to Florida in a shorter amount of time than you can take a train from The Bronx to Brooklyn and that’s without a horde of gangs trying to kill you or cops trying to arrest you.  The Warriors have to do it in one night and it’s one hell of a night indeed.

Like most great stories, it’s a simple and time-tested one.  Indeed, the supposed inspiration for THE WARRIORS is based on the Greek story of ‘Anabasis’, which is about a band of Greek mercenaries betrayed and stranded far from home and their desperate march to safety.  But I’ve seen any number of westerns where Army patrols or wagon trains are lost and stranded in Indian territory and have to fight their way to safety and Walter Hill himself would use this theme again in his “Streets Of Fire” where his small band of heroes have to once again fight their way out of a dangerous, hostile land and get back to the safety of familiar home ground.   All of these genres have echoes in THE WARRIORS as well as comic books, which is what Walter Hill himself has said THE WARRIORS is: a live action comic book.

And I can see where he’s coming from.  Certainly there have never been real life gangs in New York like The Gramercy Riffs who dress in tailor-fitted karate outfits or The Boppers who wear purple vests, neatly pressed shirts, ties, applejacks and have spats on their shoes or The High-Hats who look like mimes wearing Abraham Lincoln stovepipe hats and then there’s everybody’s favorites: The Baseball Furies who look like The New York Mets in Kiss makeup.

And take the racial makeup of The Warriors, for instance.  While every other gang in the movie is shown as having racial/ethnic roots, The Warriors are plainly multi-cultural with three blacks, two guys who look as if they could be Italian, one guy who looks as if he might be Polish, two possible Hispanics and one guy who could conceivably be anything you like.

Originally, Walter Hill wanted The Warriors to be an all-black gang but the producers put their foot down on that right quick and said no.  I notice they didn’t have any problem with The Gramercy Riffs, who are the nominal bad guys orchestrating the nightlong hunt for The Warriors be all black, though.  And as I said earlier, we hardly see anybody else in the movie besides the gangs and the cops and that lends to the alternate world feel of the movie.  This is a strangely depopulated New York; unusual for a city that is active 24/7/365. 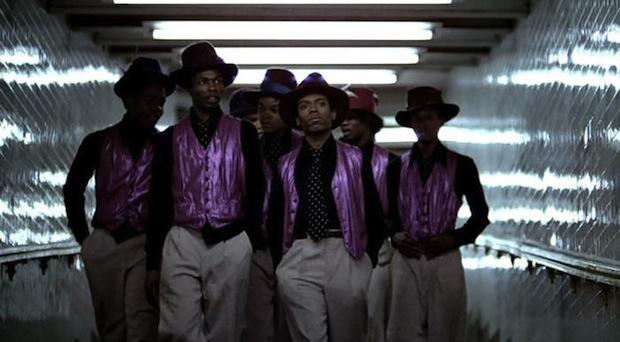 I’d like to be able to say that the movie has outstanding performances but I honestly can’t.  Most of the actors in the movie were just starting out and went onto other films where their acting abilities could really shine but here, the main thing is the atmosphere, the style, the action and the suspense of us wondering if The Warriors are going to make it back to Brooklyn.  Michael Beck plays Swan who leads The Warriors after Cleon is killed and he goes through the movie with clenched jaw and single minded determination to get his men home.  A baby-faced James Remar is Ajax, the chief ass-kicker of the gang who is taken out of the movie much too soon.  Deborah Van Valkenberg is Mercy who is originally part of The Orphans but switches to The Warriors and she probably turns in the best acting job of the movie as she does a great job of showing Mercy’s thirst for the sex and violence gang life brings.  There’s a scene where a Warrior is fighting with a cop and she’s standing there watching, eyes shining brightly, breathing heavily and obviously sexually excited by the violence.  And there’s a fight in a subway men’s bathroom where she gleefully throws herself into the middle of the fight and again it’s obvious she’s getting a sexual charge out of big sweaty guys beating the hell outta each other.  And we won’t even talk about what she does on Friday or Saturday nights except to say that when you watch the movie, look at the expression on her face when she talks about what she does on Friday and Saturday nights and how Saturday nights are better than Friday.

I’d like to also mention the late Lynn Thigpen who plays The DJ who during the night is giving out information to the gangs hunting The Warriors and plays records to taunt them as her character puts an interesting spin on the action we’re watching.  Listening to her and her constant sports references, I realized that the action of THE WARRIORS was a metaphor for…and don’t laugh…a baseball game.  Her character acts as a commentator of the action.  The Warriors are the home team who start out with nine men and the NYPD act as referees who remove any Warrior who deviates from their goal of trying to get back home (yer out!).  The subways are the base lines and each stop where The Warriors have a fight are all bases.  The  first one is in the park with The Baseball Furies.   The second one is in the lair of the Lizzies, a lesbian gang.  And the third one is in the Union Station Bathroom with The Punks.  Or maybe I’m reading more into it than is really there.  You tell me.

And no review of THE WARRIORS can be complete with mentioning David Patrick Kelly who plays Luther.  Most of the best moments in the movie come from him and his really loopy performance, especially the classic scene where he has three empty Budweiser bottles on his fingers and he’s clinking them together, exhorting The Warriors to “come out and playyyyyy-ayyyyyy”.  But I really like the scene where Michael Beck asks him why did he kill Cyrus and throw the city’s gangs into a frenzy?  Kelly replies simply: “I like doing stuff like that…it’s fun.”  No high-minded motives for this cat.

So should you see THE WARRIORS?  Most of you reading this have probably seen it already and more than one time so I’m preaching to the choir when I say it’s an absolute action masterpiece that is necessary viewing.  For those of you who haven’t seen it, I strongly advise you to Netflix THE WARRIORS the next time you’re sitting at home on the weekend wondering what to rent.  It’s a perfect Saturday night movie and despite the acting and somewhat silly dialog at times, the movie overcomes those shortcomings with a solid story and some really cool action/fight scenes. THE WARRIORS has well deserved its reputation.  It’s simply and truly one hell of a good movie and should be seen on nothing more than that basis.

Rated R: I can’t believe that viewers today would actually be offended by the violence in THE WARRIORS.  It’s not even comic book violence as comic books nowadays are far more violent than this movie.  Even the language isn’t all that bad.  I don’t know if that’s a reflection on us as a society today or what but hey, I just review movies, not society.

3 thoughts on “The Warriors”