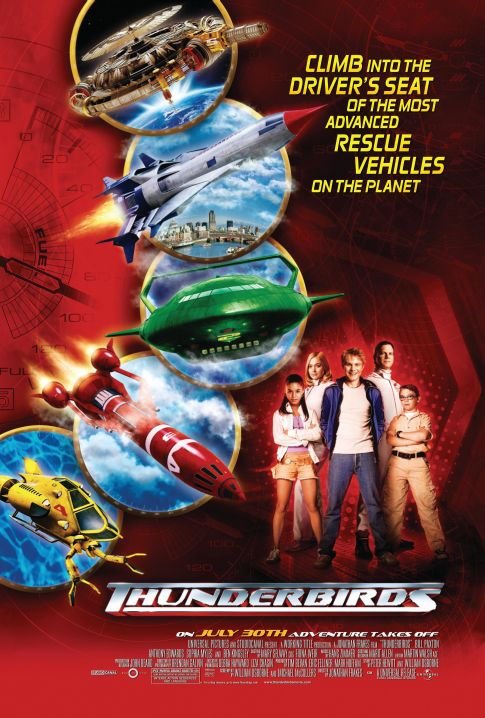 Based on “Thunderbirds” created by Gerry and Sylvia Anderson

The movie was especially a major letdown for me because I’ve been a fanatical lover of THUNDERBIRDS ever since I was a kid.  In the 60’s Gerry and Sylvia Anderson created a series of popular futuristic action/adventure shows featuring puppets.  There was “Stingray” the adventures of a submarine crew protecting an underwater city.  “Fireball XL5” was set in outer space and “Captain Scarlet” which was a really fun series about a group of aliens called The Mysterions trying to take over Earth.  Standing in their way is an organization called Spectrum whose members all have color based names and rankings.  Captain Scarlet is the major enemy of The Mysterions due to their accidentally giving him a healing factor while trying to duplicate him and bring him under their control.  Captain Scarlet can regenerate after any and all injuries and may actually be immortal since he dies several times during the series and comes back to life.

The THUNDERBIRDS TV series concerned the adventures of International Rescue, an organization created by and staffed by The Tracy family who live on a Pacific island paradise that houses their spectacular fortress containing their specialized rescue vehicles, called Thunderbirds.  International Rescue is a freelance crisis response team that immediately zooms to wherever disaster strikes.  Thunderbird One is a hypersonic jet.  Thunderbird Two is a heavy cargo carrier.  Thunderbird Three is a spaceship.  Thunderbird Four is a submarine while Thunderbird Five is the Tracy family’s personal space station that monitors all emergency channels and potential disaster spots from orbit above Earth.  Each vehicle is operated by one of the sons of Jeff Tracy, ex-astronaut and billionaire.  In a nice touch, Tracy’s sons: Alan, Scott, Gordon, Virgil and John are all named after the Mercury astronauts.  Providing back-up and support for The Thunderbirds is their resident scientific genius Homer Newton III aka Brains, faithful manservant Kyrano and his daughter Tin-Tin (who has a crush on Alan) and ex-superspy Lady Penelope Creighton-Ward who is more or less Jeff Tracy’s personal enforcer.  Based in London and backed up by her trusty cockney sidekick Parker, Lady Penelope lives in swinging London where she tools around town in a six-wheeled pink Rolls Royce pimped out with as many gadgets and weapons as The Batmobile or The Black Beauty.

Despite being dismissed as a ‘kid’s puppet show’ by many, THUNDERBIRDS was actually a pretty mature show.  First off, the premise of the show wasn’t about good guys vs. bad guys.  Most of the episodes were nail-bitingly suspenseful as International Rescue had to figure out how to avert some disaster or save people trapped in a life-threatening situation.  One of the best episodes was the one where The Empire State Building collapses and the only way to reach workers trapped in the basement is by an underground river.  But sometimes The Hood, Kyrano’s half-brother who wanted to steal the secrets of The Thunderbirds to use for criminal purposes would cause a disaster to bring International Rescue out.  Usually The Thunderbirds never dealt directly with The Hood.  That was reserved for Lady Penelope and Parker.

Now with a premise like that, the movie version of THUNDERBIRDS should have been a no-brainer.  But the writers and the director, Jonathan Frakes (Command Riker from “Star Trek: The Next Generation”) threw out everything that made the original show so much fun and so enjoyable, instead turning it into an out-and-out children’s action movie that looks as if it were made for The Disney Channel.

The plot centers around Alan Tracy (Brady Corbet) who dreams of the day when his father Jeff (Bill Paxton) will finally let him join his brothers as they fly around the world saving lives.  Alan’s best friend is Fermat (Soren Fulton) who takes after his dad Brains much the same way Alan takes after his dad.  While on spring break at Tracy Island, The Hood (Ben Kingsley) fires a missile at Thunderbird Five, knocking it out of orbit.  Jeff and the boys charge up there to save John Tracy and end up stuck on the space station that is falling back to Earth.  The Hood takes control of the island and plans to use Thunderbird Two to rob The Bank of London.  It’s up to Alan, Fermat and Tin-Tin (Vanessa Ann Hudgens) to stop The Hood and save Jeff and the others on the space station.

None of this is anywhere as exciting as it sounds.  It fact, it’s downright dull in most spots, despite the kids running around and shouting all their dialog, even during scenes where they’re supposed to be hiding from the bad guys.  Ben Kingsley apparently thinks he’s acting in  a completely different movie since he plays his role totally straight while everybody else knows they’re making a live-action cartoon.  Kingsley and Bill Paxton are both excellent actors and while watching this I was trying to figure out whom they pissed off so much to have gotten stuck in this mess of a movie.  Sophia Myles and Ron Cook as Lady Penelope and Parker are apparently the only ones who bothered to rent the DVD box sets of the original show and watch them.  They hit the right note with their characters and when they’re on screen I felt I was actually watching a live action episode of the TV show.

The set designs and production is very good, what with the look of Tracy Island and the vehicles reproduced in faithful detail.  It’s too bad it was wasted in such a shameful manner.  The other Tracy boys are totally ignored in favor of the three teenage heroes so it’s hardly even mentioning the actors who play them. And out of the teenage actors Vanessa Ann Hudgens is the only one who’s fun to watch and can actually act.  Her two male co-stars are embarrassingly bad and she easily steals every scene she’s in.  Maybe if they had put her in the role of Jeff Tracy’s daughter THUNDERBIRDS might have been more enjoyable.  As it is, if you’re an old time fan of the show like me, you’re going to be tortured sitting through this, so don’t.

Do yourself a favor for me:  go get yourself the DVDs of the original series and the two feature films made back in the 60’s: “Thunderbirds Are GO!” and “Thunderbird 6!” because you’re my friends and you deserve to watch the real THUNDERBIRDS in action.

One thought on “Thunderbirds”