One of the things that made “Serenity” so memorable was the performance of Chiwetel Ejiofor as The Operative, the movie’s main bad guy.  Even though he was the antagonist and performed a number of truly horrific deeds during the course of the movie, there was no denying that Chiwetel Ejiofor’s acting ability blew me away and made The Operative a character that maybe I couldn’t root for or like but I came away from the movie feeling as if I fully understood his motivations.  This cat was cruel but full of heart.  Emotionless but radiating nothing but feeling.  Cold as a February night in Brooklyn yet warm with the security he was doing the right thing.  As The Operative, Chiwetel Ejiofor created a memorable character that for me typified exactly what a Good Bad Guy should be: He doesn’t think he’s The Bad Guy.  As far as he’s concerned, he’s The Good Guy and his actions make perfect sense to him according to his spiritual, emotional and intellectual directions.  I’d seen in reviews and interviews DIRTY PRETTY THINGS always being cited as one of his best movies. Know what? It most certainly is.

Okwe (Chiwetel Ejiofor) is an illegal Nigerian immigrant living in London.  By day he drives cab and at night he works at a nice hotel where he supervises the Russian doorman Ivan (Zlatko Buric) and the cleaning staff, including the maids.  One of them is the Turkish immigrant girl Senay (Audrey Tautou) who has fled an arranged marriage that would have been just as good as slavery.  She and Okwe have a working friendship: he cleans and cooks for her and she lets him sleep on her couch.  Okwe’s boss Mr. Juan (Sergi Lopez) is kinda on the sleazy side but Okwe does not understand how really bad the man is until one night when Okwe goes up to one of the rooms to fix an overflowing toilet and finds a human heart in it.  Okwe takes the heart to Mr. Juan, suggesting that somebody should call the police.  Mr. Juan, knowing Okwe’s situation quite well, dials the police and holds out the receiver, daring him to report the heart.

It turns out that Mr. Juan is running a lucrative black market organ operation out of the hotel.  Give up one of your kidneys and he’ll give you a passport.  For the immigrant subculture of London, a passport is The Holy Grail, The Ark of The Covenant and The Sword In The Stone all in one.  It means that you can escape a life of drudgery and servitude, the poverty of working a below minimum wage job and go somewhere else, like New York or Los Angeles and start a new life.  Senay has a cousin who lives in New York and she desperately wants to go there.  Preferably with Okwe, with whom she has fallen in love with.  But Okwe is haunted by his dark past that comes to light in a surprising way when Mr. Juan learns that Okwe is a doctor.  Mr. Juan puts pressure on Okwe to come into the business with him.  He’ll give Okwe $10,000 dollars and a clean passport for Senay as Mr. Juan has a 12-year-old girl who is flying into London with her parents to get a new kidney.  Okwe refuses to have anything to do with the whole deal until he learns that Mr. Juan has talked Senay into being the donor for the girl.  Suddenly, things change.  Boy, do they ever.

The way I lay it out like that you’d be fair in thinking DIRTY PRETTY THINGS is a thriller/suspense movie but it really isn’t.  The fascinating thing about this movie is the way it explores the illegal immigrant subculture in London but this story could have been told in New York, Paris, Beijing, Los Angeles and anywhere there is a sizable population of illegal immigrants who clean up society’s shit.  There’s a wonderful scene where a buyer of illegally donated organs asks Okwe who he and his friends are and he says: “We’re the ones you never see.  But we drive your cabs, clean your rooms and suck your dicks.” And I liked the scenes where we see how Okwe’s boss at the taxi company steers business his way.  His boss has friends who have all caught the clap from the same nasty ho and Okwe makes a few bucks on the side treating them.  He steals antibiotics from the hospital by the simple means of going in with a mop and bucket right into the room where the drugs are kept since nobody pays any attention to a black man with a mop.

In fact, except for the customers of the hotel and the immigration officers who are pursuing Senay, we see no native Londoners or native British citizens.  The movie is all about the illegal immigrant culture that is a necessary part of London’s economy.  They’ve formed a network that crosses racial lines and boundaries as in a very real sense they are all in exile and trying to survive in a foreign land.

I really can’t praise Chiwetel Ejiofor’s performance enough in this movie.  He’s got these incredibly expressive eyes he knows how to use to maximum effect.  There are several great scenes where he says nothing but we can look in his eyes and see exactly what he’s thinking and feeling.  And he backs up his expressive eyes with superb acting.  This guy is terrific, and he’s an actor who should get a helluva lot more work than he is now.  I also liked Benedict Wong as Okwe’s best friend, a Chinese immigrant who works in a hospital’s morgue.  He throws away human remains, cleans off autopsy tables and manages to keep a great sense of humor and a real sense of how the world works.  He tries to pass this onto Okwe with little effect.  And because of their differences about how they view they lives, their conversations make for some of the best scenes in the movie.  Audrey Tautou also does very good work as Senay.  We can tell right from the first scene she’s in love with Okwe but he takes most of the movie to catch on.  And Sophie Okonedo does exceptionally fine work as Juliette, a prostitute who works the hotel who most definitely does not have the clichéd heart of gold but she knows who her people are and comes through for them when it counts. 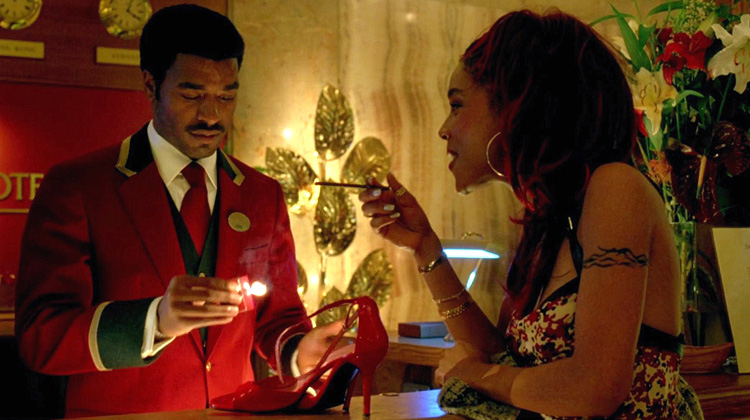 So should you see DIRTY PRETTY THINGS?  I’d say absolutely yes.  But don’t go into it expecting a straight out suspense thriller even though it’s got elements of that genre.  It’s an absorbing and wonderful look at a subculture of the society that exists in every major city in the world and one we may not want to admit exists or acknowledge.  But the people who inhabit that world are ones we see every day of our lives and whether or not we want to admit it, they’re human just like us and have dreams and hopes and aspirations of a better life just as we do.  The difference between them and us is that we don’t have to trade our humanity and body parts to achieve our dreams and they sometimes do.