I get ragged on quite a bit because a lot of people say that I don’t know what’s funny or that I have too highbrow a sense of humor or don’t have a sense of humor at all.  I will admit that my sense of humor is somewhat skewed.  I went to see “The Texas Chainsaw Massacre” during its original theatrical run and sat there laughing like a hyena until my friends told me to shut the hell up or they would beat the piss outta me. I honestly thought I was watching a spoof of horror movies.  And I’ve sat through “Shaun of The Dead” “Bringing Up Baby” “There’s Something About Mary” without cracking so much as a smile.  I dearly love The Marx Brothers and Buster Keaton but Laurel & Hardy and Charlie Chapin you can keep as they don’t turn my crank at all.

Now there is a genre of comedy I totally get and laugh my ass off every time I watch a movie in that genre: the stoner comedy film.  You see, I’m a member of that generation that listened to Cheech and Chong albums or went to see a Cheech and Chong movie while freely and generously indulging in whatever recreational pharmaceutical of choice.  I think it’s more than safe to say that Cheech Marin and Tommy Chong created the stoner comedy movie genre and without them we wouldn’t have “The Big Lebowski” “Half-Baked””Friday””Dude, Where’s My Car?” the “Harold & Kumar” trilogy or SMILEY FACE.  Why do stoner films make me laugh?  Maybe it’s because of my personal and professional familiarity with the drug subculture.  I watch stoner films and if it’s a good one, the characters and the situations ring true and that turns my crank.  How do I know if it’s a good one?  Simple.  If you can watch a stoner comedy cold sober or twisted and still laugh your ass off, it’s good.  And SMILEY FACE I would put in that category. 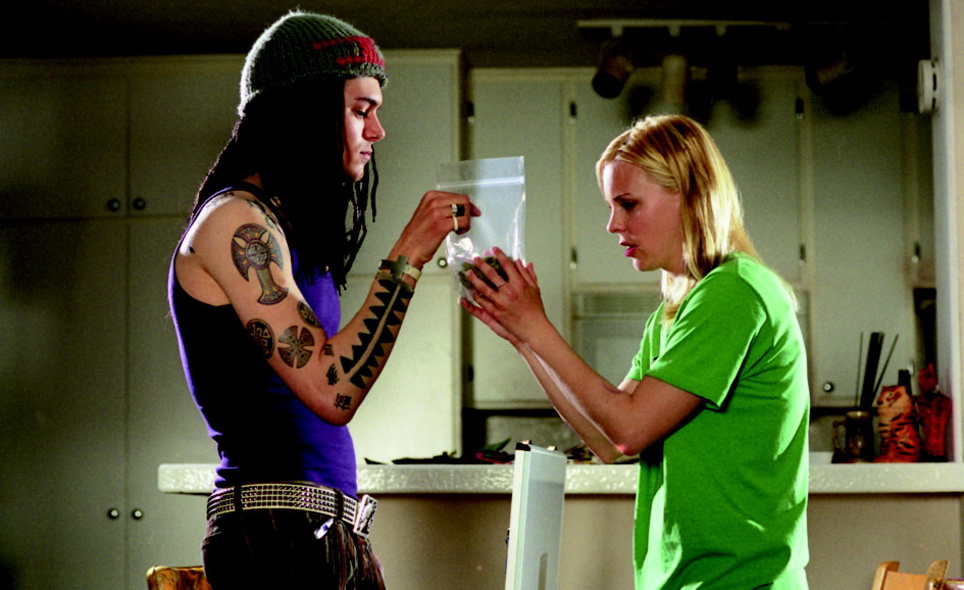 First of all, what is a stoner comedy film?  It’s a movie that revolves around the use of marijuana and the pursuit/results/consequences of using said drug for comedic effect.  If maryjane fuels the plot and gets it going, usually with the characters trying to purchase pot or what happens to them after they get the weed, it’s a stoner movie.  Now, there are some exceptions, such as “The Big Lebowski” which is just as much a character study and a modern mystery/noir as it as a stoner comedy but that’s a whole ‘nother review.

SMILEY FACE is something really unique in that it’s the only stoner comedy I’ve ever seen with a female stoner as the lead.  Jane F (Anna Faris) is a failed economics student and aspiring actress who one day ends up sitting in a Venice Beach Ferris Wheel car, holding onto the actual Communist Manifesto written by Karl Marx and having a conversation with the disembodied voice of Roscoe Lee Browne with absolutely no idea of how she got there because she’s totally and absolutely baked outta her mind.  The movie then jumps back to the beginning of the day to show us how Jane got there.

First of all, it wasn’t such a good idea that Jane hit her bong at 9AM since she has an important audition at 11.  After getting high, she gets the munchies and eats a dozen cupcakes baked by her really weird roommate Steve (Danny Masterson).  Jane assumed that Steve doesn’t get high since she’s never seen him indulge but that’s because Steve ingests his wacky tobaccy through cupcakes.  Just so happens that Steve has baked a dozen cupcakes full of industrial strength weed to take to his buddies at a sci-fi convention so they can get their wigs tight.  Naturally, the overdose of marijuana takes Jane to a new level of high she’s never been at before.  The rest of the day follows her as she tries to replace her roommate’s cupcakes, pay back her dealer (Adam Brody) and make her audition all while totally blitzed on bammy.

First off, SMILEY FACE is absolutely and totally funny.  And in a large part that is due to Anna Faris and her performance.  Before this, I only knew her from the “Scary Movies” franchise but after seeing this movie I’m going to find her other work and watch it.  She’s on screen just about the entire running time of the movie and she owns it from start to finish.  I have no idea if she ever indulged in marijuana use but in her body language, the look on her face and the phrasing of her words in certain situations, she gets it absolutely right.  There’s a scene where she and her dealer are discussing Reagonomics as it applies to drug dealing and I forgot to laugh as she had me completely convinced she was high.  And there’s the scene in a meat packing plant where she gives a rallying cry for unionism and the workers to throw off the chains of their oppressors that belongs in The Hall Of Fame of Great Movie Moments.  I would not dream of telling you how that scene ends. 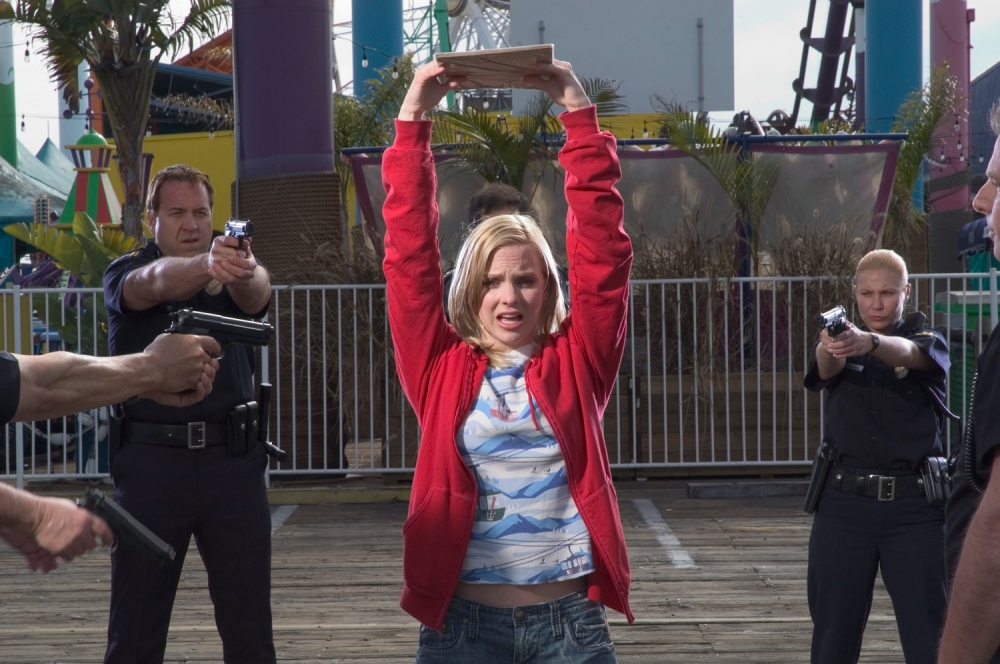 Part of the fun of watching this movie is seeing how many of the supporting characters are people we know from our favorite TV shows and movies.  Danny Trejo is here, partnered with John Cho who plays ‘Harold’ in the “Harold & Kumar” trilogy.  Jane Lynch and Jayma Mays you know from “Glee”.  Danny Masterson you know as Hyde from “That 70s Show”.  John Krasinski from “The Office” is here as a nerd in love with Jane.  Marion Ross, Fonzi’s beloved ‘Mrs. C’ from “Happy Days” has a small but pivotal role as well.

So should you see SMILEY FACE?  Without a doubt, yes.  If for no other reason than the outstandingly hilarious Anna Faris performance if you need a good reason. Go watch and enjoy.  And you don’t even have to indulge in your recreational pharmaceutical of choice to enjoy it.

But it wouldn’t hurt.