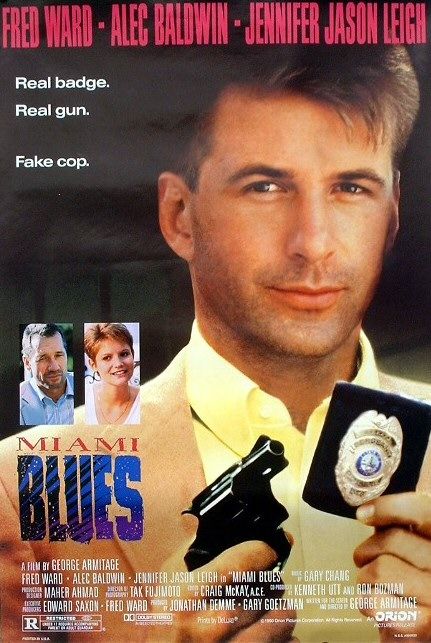 Directed and Written by George Armitage

Based on the novel “Miami Blues” by Charles Willeford

You ever watch a movie then see it years later and it in no way resembles the movie you saw years ago?  I had that feeling while watching MIAMI BLUES.  I know I saw this movie years ago at a 42end Street grindhouse mainly because I’m such a Fred Ward fan.  But I remember the movie as being more of a comedy and not quite so dark and violent.  Maybe it’s me that’s changed and not the movie.  After all this time I should hope I’ve changed.  But it was still disconcerting to me because I’m usually pretty good at remembering movies I’ve seen even as far back as 1989.  My wife Patricia says she can’t understood how I can’t remember the names, phone numbers and birthdays of 75% of my relatives but I remember casts, plots and lines of dialog from movies I’ve seen 20 years ago.  There’s an obvious answer but we won’t go into that now.  Let’s get on along with the movie review.

Frederick J. Frenger Jr. (Alec Baldwin) flies into Miami wearing the suede sport coat of a man he’s killed in San Francisco.  Fifteen minutes after he’s touched down Junior has broken the finger of a Hare Krishna just trying to offer him celestial enlightenment and stolen a suitcase.  Junior’s a killer, a con man and thief.  He’s successful at all three but only God knows how.  He never plans his crimes, just seizes whatever opportunity he happens upon and through a combination of nerve, luck and bravado manages to pull them off.   Junior quickly shacks up with the extremely dim witted hooker Susie Waggoner (Jennifer Jason Leigh) who is totally captivated by Junior.  She dumps her pimp for him as well as empties her bank accounts to give to Junior.

In the meantime, Detective Hoke Moseley (Fred Ward) is assigned to the case of the Hare Krishna with the broken finger.  Seems as if the poor bastard died from shock so now it’s an active homicide investigation.  Neither Moseley nor his partner (Charles Napier) seems very interested in solving the crime.  But Moseley gets lucky enough to actually track down Junior to Susie’s apartment and rattles Junior with a couple of quite astute observations while they’re having dinner.  Just the scene where Fred Ward manages to get himself invited to dinner is a quirky enough scene.  It’s not funny enough to be comedy yet it’s not serious enough to be drama.  After chowing down Susie’s pork chops and drinking all of Junior’s beer, Moseley retires to the run-down hotel he calls home.  And is yoked the very next day by Junior who has followed him there.  Junior beats the ever-lovin’ tar outta Moseley.  He then steals Moseley’s gun, badge and his false teeth (don’t ask) and proceeds to go on a one-man crime wave using Moseley’s badge and pretending to be a cop.  Moseley, now the laughing stock of the department lies in a hospital bed, getting fitted for a new set of choppers and planning his revenge on Junior once he gets released.

MIAMI BLUES is a strange sort of crime thriller in that when I first saw it I remember laughing a whole lot more but having watched it recently after such a long period of time there were scenes where I was wondering if I should be laughing or cringing.  The scene where Moseley is having dinner with Junior and Susie qualifies as comedy until the moment when Moseley offhanded asks Junior where he did his time.  Junior replies that he’s never done time and Moseley casually notes that Junior protects his plate as if somebody is going to take his food from him.  The same way cons in the joint protect their plate.  Suddenly the mood and tone of the scene changes gears just that fast and you get the feeling that Junior just might do something nobody is going to like.  Especially since we’ve seen that he can commit mayhem as easily as other men put on their pants in the morning.

It’s got a nice cast.  Alec Baldwin has a lot of fun playing the psychotic Junior Frenger.  Baldwin is really good at playing guys like this; guys with more good looks and charm than any one man should have but who can turn into a cold-blooded bastard in a heartbeat.  And you can’t help but have a sort of admiration for the sheer nerve Junior has in pulling off his crimes.  This is one of those movies where the bad guy is actually more appealing and sympathetic than the good guy.  Jennifer Jason Leigh is a hoot as the slow-witted hooker Susie.  I’m so used to seeing her play really smart roles that it was actually very funny seeing her play a character so dense that even other characters in the movie ask each other if it’s possible Susie can be that dumb.  Fred Ward is one of my favorite all time actors and I’ll watch him in anything.  His Hoke Moseley is a cop who really doesn’t seem all that motivated or interested in doing his job.  At least not until Junior starts running around Miami pulling stickups while waving his badge and shooting people with his gun.  I could do without him taking out and putting in his false teeth every five minutes but the teeth are a running gag in the movie so maybe you’ll get more of a laugh out of it than I did.  And I was pleasantly surprised to see Shirley Stoler appear in this movie.  She co-starred with Tony Lo Bianco in “The Honeymoon Killers” a terrific crime suspense thriller based on a true story.  Charles Napier, Paul Gleason and Nora Dunn are also very good in their supporting roles, especially Nora Dunn who plays a detective Moseley pressures into helping him find Junior after Moseley gets out of the hospital.

So should you see MIAMI BLUES?  It depends on your mood and your tolerance for quirky semi-comedic/dramatic movies and how much of a fan you are of Alec Baldwin, Jennifer Jason Leigh and Fred Ward.  I happen to like all of them so just on that basis I’d say yes.  Alec Baldwin has plenty of scenes where he walks around with no shirt on so he’s eye candy for the ladies and this is a chance to see him in his early in his career when he was hailed as the next big thing in movies.  If you’re a fan of crime thrillers I’d say give it a rental.  But as I said earlier, there’s a lot going on in this movie that might have you thinking that it’s a comedy.  At least until you get to the violent bits.  And the violence in this movie is unexpectedly brutal so consider yourself warned. 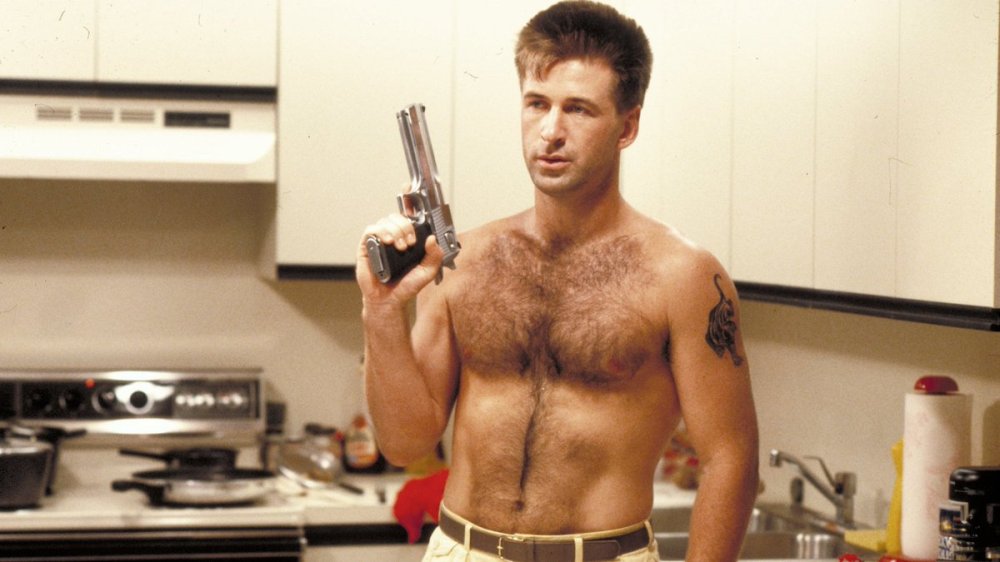 Rated R: And it most certainly is.  There’s free use of adult language, brutal violence and two mildly graphic sex scenes so make sure the urchins are in bed before you watch this one.