I headed into the den with a 3 liter of Coca-Cola, a bag of potato chips the size of a Dickensian urchin and a carton of Reese’s Peanut Butter cups.  My wife Patricia knows the signs well and asked me what movie I was going to watch.  “JAWS” I reply.  She shook her head slightly and said; “How many times have you seen that?”  I really couldn’t answer her.  In between its original theatrical run where I first saw it and now, I really couldn’t say.  Maybe fifteen or twenty times. Probably more.  But to me it really doesn’t matter.  I don’t keep count.  JAWS is one of those movies that I can cheerfully watch over and over again.  Patricia is like most people, I think: she watches a movie once and then she really can’t be bothered to see it again.  My brain is hardwired a different way.  A movie like JAWS I can see over and over again because for me it’s so rare that elements of horror, high adventure, human conflict, drama and even comedy are married so well to a bedrock solid story and acting so natural that you forget you’re watching a movie and have an out-of-body experience that transports you to another world.  It would happen again two years later when Steven Spielberg’s boy George Lucas conquered the world with “Star Wars” but that’s another review.  Let’s get back to JAWS.

Amity Island is a summer resort town gearing up for its big Fourth of July weekend.  Amity Island residents and merchants depend on the summer tourist dollars to support them through the fall and winter so they’re not happy when the mangled body of a girl is washed up on the beach.  They’re even less happy when Police Chief Martin Brody (Roy Schneider) determines that the girl was the victim of a shark attack and plans to close the beaches.  Town Mayor Larry Vaughn (Murray Hamilton) assures the merchants and residents that everything will be fine.  Mayor Vaughn has a positively brilliant genius for self-delusion because even after a young boy is killed by the shark he still insists that there’s nothing wrong in Amity and they’re going to have a great summer.

Brody isn’t so optimistic and he enlists the help of marine biologist Matt Hooper (Richard Dreyfuss) to help him catch and kill the shark.  A shark that Hooper informs both Brody and Vaughn just isn’t any shark: it’s a Great White Shark.  A fish that is the Galactus of all sharks.  Hooper says it best: “It does nothing but swim, eat and make baby Great White Sharks.” But it isn’t until the shark kills another innocent and almost gets Brody’s son that Brody can get the beaches closed and gets the authorization from Mayor Vaughn to hire professional shark killer Quint (Robert Shaw) to kill the shark.  Quint wants $10,000.  Brody says fine as long as he and Hooper can go along.  Quint reluctantly agrees and the three men set off in Quint’s boat ‘The Orca’ to track down and kill the beast.  It’s a quest that takes up the second half of the movie and it’s one of the most nail-biting quests in movie history.  It’s frightening, horrifying and even touching.

JAWS has been called a modern-day “Moby Dick” and there’s a lot of validity in that.  The three men all are obsessed with finding and killing the shark for their own reasons.   Hooper is simply crazy about sharks and has been since one almost ate him when he was a boy.  Brody feels an overwhelming sense of guilt for the death of the young boy.  Quint is a survivor of the World War II sinking of The USS Indianapolis in which a large number of men spent days in the water being attacked by packs of sharks.  The Amity Great White itself exhibits behavior that both Hooper and Quint have never seen in a Great White Shark before, giving the creature an even deeper layer of menace.  In fact, it even seems to be leading the three men further and further out to sea… 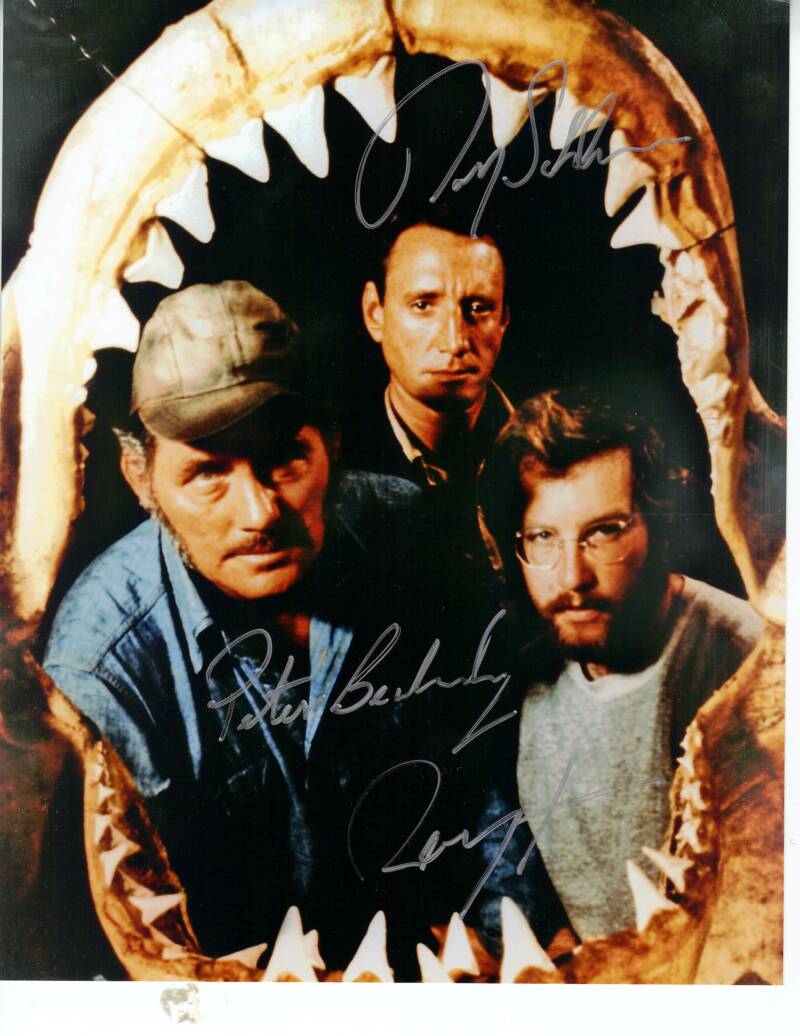 Chances are you’ve probably seen JAWS so I don’t have to tell you how great a movie it is.  JAWS works on a lot of levels during the first half of the movie.  I like the politics of how a summer resort island depends on tourist dollars and how that can make otherwise perfectly reasonable human beings turn a blind eye to the fact that they have an eating machine swimming around their island.  I like how Police Chief Brody is almost a comedic character in a lot of scenes.  Roy Scheider brings an amazing amount of humanity and warmth to the character of Brody.  He’s not a superman.  In fact he’s really not all that good a Police Chief.  But he is a good man who wants to do the right thing and he’s willing to put his ass on the line to do it and in the end that’s what really matters.  Richard Dreyfuss is outstanding as Matt Hooper and you really get the sense that the two men forge a solid friendship as they figure out what to do about this situation.  Murray Hamilton has a hard job in this movie but I admire the way he pulls it off.  I’ve discussed JAWS with so-called movie fans who say that they don’t think the movie is realistic because anybody with any common sense would have closed the beaches after the first shark attack (these are the same people who think that “Friday The 13th Part III” is a horror classic) but Hamilton’s character is one that exists in the real world and even though he makes horrendously bad choices we understand why he makes those choices even though we don’t agree with them.  It’s a much underrated performance and among the best in the movie.  In fact, the only performance that I can do without is Lorraine Gary as I don’t think she’s as good an actress as Tanya Roberts and I think Tanya Roberts is the worst actress to have ever lived.

Robert Shaw walks away with the acting honors in this one.  His Quint is a memorable character in every sense of the word in that we get the real sense that this is a character that had a life before this movie started.  Most people cite Roy Scheider’s “You’re gonna need a bigger boat” as the classic scene in JAWS but Robert Shaw had one just as good with Richard Dreyfuss that never fails to crack me up: Hooper is loading a shark cage aboard Quint’s boat…

Quint: What d’ye have there?

Quint: (after a beat) Anti-shark cage.  You go in the cage?

Quint: Cage goes in the water?

Quint: Shark’s in the water?

Quint then walks away singing “Spanish Ladies” in such a manner that is so well timed you can’t help but bust out laughing.  At least I can’t.  That whole scene between Shaw and Dreyfuss is a wonderfully played comedic bit that The Marx Brothers would have been jealous of.  Shaw and Dreyfuss have another great scene later on where they drunkenly compare battle scars and sing “Show Me The Way To Go Home”

I’ve gone on long enough.  Either you’ve seen JAWS and you agree with me or not.  Or maybe you haven’t seen it.  If you haven’t I strongly recommend that you do so.  It’s a movie that succeeds on the level of sheer entertainment value.  Trust me, 75% of the crap Hollywood throws on the Cineplex screens today doesn’t compare with JAWS in terms of suspense, excitement, characterization and great storytelling.  It was the movie that made Steven Spielberg a major player in Hollywood and it was the first “summer blockbuster” being the first movie to make $100 million dollars in theatrical release.   It’s also a fine example of the talent and professionalism that Roy Scheider and Robert Shaw brought to their work.   Among the many fine and outstanding roles they both played, their work in JAWS will be remembered as among their best.