Based on the play “Farragut North” by Beau Willimo

A movie like THE IDES OF MARCH couldn’t have come along at a better time.  What with the country being so politically divided and the various political parties at each others throats, a political thriller is undoubtedly a topical one.  But it’s not fair to call THE IDES OF MARCH a thriller.  It’s more of a character piece, examining the flaws of our political system.  Flaws that make it just about impossible for an honest man to remain honest if he wants to get to where he believes he needs to go to do the most good.  And how good can the intentions of a good man be when he betrays everything he believes in to achieve those intentions?

Stephen Meyers (Ryan Gosling) is The Junior Campaign Manager for presidential candidate Govenor Mike Morris (George Clooney).  Under the guidance of Senior Campaign Manager Paul Zara (Philip Seymour Hoffman) Stephen is clearly the real star of the campaign and it’s obvious he’s got a brilliant future ahead of him.  In fact, he’s considered to be so valuable a resource that the rival Senior Campaign Manager Tom Duffy (Paul Giamatti) wants to hire Stephen for his team.  Paul wants to make use of Stephen before he becomes cynical and corrupt like Tom and Paul. 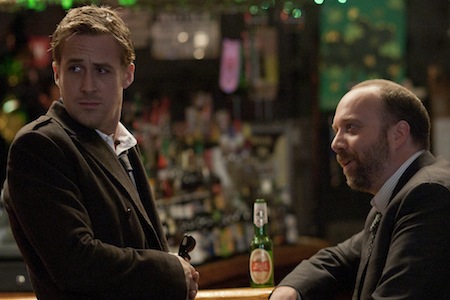 Stephen turns him down but decides not to tell his boss.  A decision that will bite him very badly in the ass later on.  Along with his decision to cover up the affair one of his interns (Evan Rachel Wood) had with Governor Morris.  Both of these decisions drive the second half of the movie which ends up the only way that it possibly could, given the nature of the arena Stephen has chosen to play in.

THE IDES OF MARCH is one of those movies I point at when people complain that movies for adults aren’t being made anymore.  It’s a movie that carefully examines why people get into politics and why it changes them.  It’s almost as if no matter how honorable a man or woman is when they start their political career, the machinery changes them.  And not for the better.

This movie has one of the best ensemble casts I’ve seen in recent movies.  Besides Gosling, Clooney, Hoffman and Giamatti there’s Marisa Tomei as a reporter for The New York Times and Jeffrey Wright as a Senator whose endorsement is hotly sought as it is vital to the success of both campaigns.  Everybody’s simply terrific in their roles and Ryan Gosling especially gives off vibes that at times reminded me of Mickey Rourke and at others of Steve McQueen.

So should you see THE IDES OF MARCH?  I would certainly say yes.  It’s a mature movie.  And when I say ‘mature’ I don’t mean just because the movie has a sex scene and the “F” word is used.  I mean that it’s mature because of the issues at stake.  The moral and emotional values that are tested and broken.  The relationships that go in directions that are not expected.  And at the end of it, Stephen Meyers is left with what he worked so hard for and only himself to decide if it was worth it.