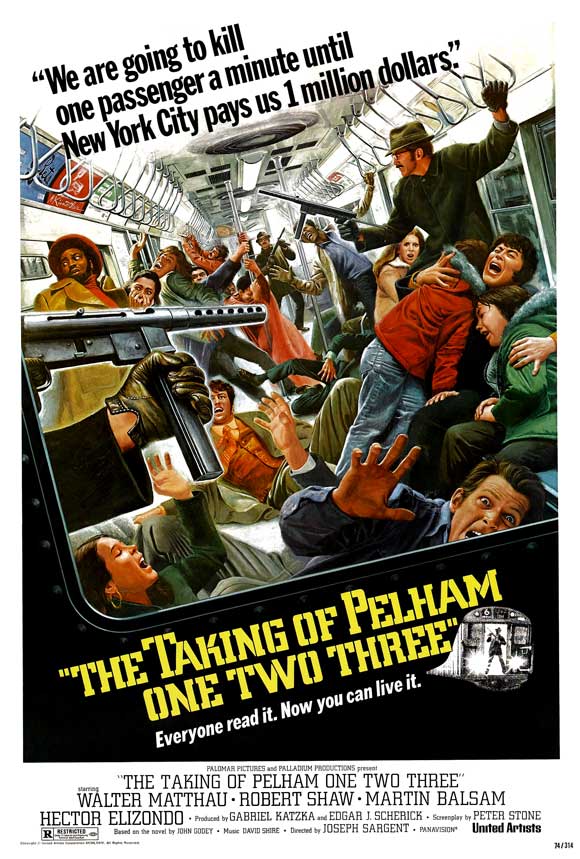 Based on the novel by John Godey

There are movies that just have to be made in New York.  There’s no way around it.  Of course you can change the location of a movie with a few taps on a keyboard but somehow when a movie is filmed in New York it gives the story a weight that makes you feel as if “yeah, I can see that happening in a town like New York” and this feeling is demonstrated excellently in the outstanding crime thriller THE TAKING OF PELHAM ONE TWO THREE  This is a movie that couldn’t have been made anywhere else.  It’s such a New York movie, full of the energy, vitality and unique qualities that make New York and the people who live and work in it so utterly exciting, baffling and downright enjoyable. It’s a typical New York day…or at least as typical as any day in New York and people are on their way to work, school or play.  And on the Number 6 train leaving Pelham Bay Park at 1:23 in the afternoon it’s a day that is about to get as bad as a day in New York can get.

Four men board the train armed with machine guns and dressed in the same trench coats, wearing the same caps pulled low over their faces, glasses and mustaches.  With military precision they effortlessly take control of the first car of the train with frightening swiftness, separating it from the rest of the train along with all its passengers, essentially hijacking it.  Parking it onto an off section of track they make their demands known: unless the City of New York pays them a ransom of one million dollars they will kill all the passengers in the car.  And the city has only one hour to pay up.  The terms are non-negotiable.  Pay or people start dying from severe lead poisoning of the worst kind.  Now of course this is met with some skepticism.  As one character puts it: “They’re hijacking trains now?  What are they gonna do?  Fly it to Cuba?”  But the hijackers make it known real soon they mean business. Luckily Lt. Zack Garber (Walter Matthau) of The Transit Police is on the scene.  He’s been escorting a group of Japanese transit officials through the Command Center (in a scene that is very funny but be warned…it’s also not Politically Correct.  But remember, this movie was made in 1974) and he quickly takes charge of the negotiations with the leader of the hijackers, a British mercenary who only identifies himself as Mr. Blue (Robert Shaw)

In fact, I strongly suspect that Quentin Tarentino got his idea of color naming his gang of thieves in “Reservoir Dogs” from this movie as the other train hijackers are named Mr. Green (Martin Balsam) Mr. Gray (Hector Elizondo) and Mr. Brown (Earl Hindman) and the movie is just about as much a battle of wits between Garber and Mr. Blue as Garber tries various stratagems as he buys time to save the lives of the hostages as he racks his brains trying to figure out exactly how the hijackers think they’re going to get away with the money when they’re on a train underneath New York.

I really can’t recommend this movie enough.  It’s an extremely well made, tight thriller that doesn’t have a slow moment in the entire running time.  It’s not bogged down with unnecessary romances or backstory filling us in as to why these men are doing what they’re doing.  They want money.  It’s as simple as that.  Lt Garber and The New York Police Department have to stop them.  It’s as simple as that.  The movie is what it is: it’s about a daring crime and we watch on the edge of our seats and wonder how the hell this thing is gonna end and we’re highly entertained while doing so. The performances sell the movie and there isn’t a bad one in the whole piece.

Walter Matthau is best known for his comedies but I think I like him even more as a dramatic actor.  In fact, this movie, a spy thriller called “Hopscotch” and a police procedural movie he made with Bruce Dern called ‘The Laughing Policeman” are among my favorite Matthau movies.  His Lt. Garber is a competent professional.  He’s not brilliant at his job but he does it well.  And I liked how the movie shows that his main concern is saving the lives of the hostages, especially in a scene where he grabs hold of a transit supervisor who has been giving him flack and generally being an obstinate pain in the ass through the negotiations.  In that scene Matthau is just as tough as Robert DeNiro or Sean Connery at their best and he sells it.

Robert Shaw plays Mr. Blue and no more needs to be said.  I don’t think I’ve ever seen a bad Robert Shaw performance and if there is one, please tell me.  Here he’s coldly ruthless, calculating and he’s such a master planner that you have no doubt that he’s going to pull this audacious scheme off.  Hector Elizondo does great work as Mr. Gray who we learn is so psychotically bloodthirsty that even The Mafia kicked him out.  Martin Balsam is a standout as Mr. Green, who is more or less the second-in-command of the outfit and he’s essential to the plan since he’s a fired transit motorman whose intimate knowledge of The New York Transit system is necessary to pull the job off.

One of the best things about this movie is how there is such a New York flavor in it.  Even the background characters have small bits that are standouts such as the diverse group of hostages who make up the social strata of the city and the two cops who have to transport the money from the bank to the subway station have wonderful dialog as they ferociously race to try and beat the hijacker’s deadline.  Jerry Stiller does great work as Matthau’s sidekick even though they don’t share a scene until the last ten minutes of the movie. And one of my favorite scenes of the movie is when The Deputy Mayor (Tony Roberts) is trying to convince his boss (Lee Wallace) to pay up the money.  It’s an insightful scene as to how politicians juggle lives, public opinion and professional gain in making life and death decisions and it’s got such smart dialog it makes me weep in envy.  And take a good look at The Mayor….yep, its same guy who plays The Mayor in Tim Burton’s “Batman”.  You’ve also got James Broderick (Matthew’s Dad) Doris Roberts, Julius Harris, Dick O’Neill, Sal Viscuso, Bill Cobb and Joe Seneca.  It’s a killer cast and they all do excellent work even if they’re on the screen for a couple of minutes.  And the last scene of this movie is absolutely the best any heist movie has ever had.  Even though I hate heist movies where the thieves don’t get away with it, the way the ending is set up is so perfect I forgive.

So should you see THE TAKING OF PELHAM ONE TWO THREE ?  Absolutely.  If you’re in the mood for a no-nonsense, take-no-prisoners crime thriller that I guarantee will have you on the edge of your seat from start to finish then you need to see this one.  It’s exciting, it’s funny, it’s scary, it’s thrilling…it’s a New York movie all the way.  You look at what passes for thrillers that come out of Hollywood nowadays and then you watch THE TAKING OF PELHAM ONE TWO THREE, a movie made forty years ago and you have to scratch your head and wonder what the hell happened.

P.S.  There was a Made For TV version of THE TAKING OF PELHAM ONE TWO THREE made in 1998 that should be avoided at all costs since it was filmed in Toronto.  Nothing against Canada, mind you, but THE TAKING OF PELHAM ONE TWO THREE depends so much on the New York atmosphere and flavor you really owe it to yourself to see the original.  There was a much better remake made in 2009 starring Denzel Washington and John Travolta.

Rated R: For the language mostly and it does get pretty raw at times.  But there’s no sex and the violence is pretty tame by modern standards.  I would advise those of you who are Politically Correct (I’m not and proud of it) that this movie was made in 1974 and so the portrayals of Blacks and Asians may make you uncomfortable.  I’m Black and I wasn’t offended because hey, we did have some of us who acted and spoke like that back then, whether you wanna believe it or not and I know because I was there.  Asians will have to defend their own selves on this one.