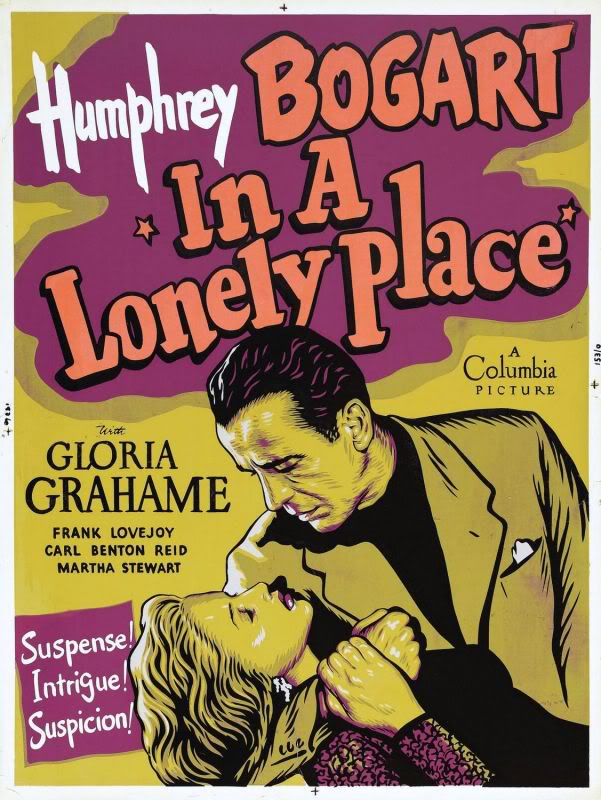 Directed by Nicholas Ray
Produced by Robert Lord
Screenplay by Andrew Solt
Based on the novel by Dorothy B. Hughes

Let’s face it; it’s not easy to make movies about writers. At the end of the day a writer’s job is to sit down at a desk for hours and hours and…well, write. That doesn’t make for a very exciting movie. It’s not like making a movie about a painter or an artist. They at least move around and do grand things when they’re being brilliant. But writers are at their most creative and brilliant when they’re apparently doing nothing or very little at all. Hardly the stuff of exciting motion pictures. Despite that there have been a surprising number of well made movies about writers and they usually focus not only on the writing process but how the writer affects those around him like in “Barton Fink” and “The Whole Wide World.” IN A LONELY PLACE is such a movie. It’s about a writer and it’s about how he affects the lives of people around him. But in a lot of ways it’s unlike any movie about a writer I’ve ever seen.

Dixon Steele (Humphrey Bogart) is a hotshot Hollywood screenwriter struggling to come back after a series of flops. While hanging out with his good pal, the alcoholic has-been film legend Charlie Waterman (Robert Warwick) at his favorite watering hole, Dix is thrown a promising job courtesy of his long suffering agent of 20 years, Mel Lippman (Art Smith) There’s a popular book that a top studio is dying to turn into a movie and they want Dix to write the screenplay. The problem is Dix doesn’t want the job and doesn’t even want to read the book.

However, the hat check girl Mildred (Martha Stewart) has read the book and loves it to death. She begs Dix to read it and write the screenplay. Dix asks her to come over to his place and outline the story for him. He figures that he can get enough from that so he can bullshit his way through the actual writing of the screenplay. Mildred is ecstatic to be part of the moviemaking process and agrees. They spend a sociable enough evening where Mildred does indeed tell Dix enough of the book’s story, plot and characters for his purposes and he sends her home with cab fare.

But the following morning Dix is awakened by an old Army buddy of his, Brub Nicholai (Frank Lovejoy) who is now a police detective. And Brub is investigating a murder in which Dixon Steele is the main suspect: Mildred was horribly and brutally killed the night before.  Brub’s superior Captain Lochner (Carl Benton Reid) wants Brub to use his friendship to get close to Dix and prove he killed Mildred. Brub doesn’t believe Dix did it. But Dix has a long history of violent behavior. Lochner believes Dix killed Mildred due to his odd lack of emotional response upon hearing of her death. Brub has known Dix ever since the war and says that Dix has always been like that. Brub plainly admires Dix, calling him a genius, claiming that Dix has ‘a superior mind.’ Brub resents his own wife Sylvia (Jeff Donnell) calling Dix ‘sick’. Sylvia makes no secret of the fact she’s uneasy around Dix and tells Brub; “if that’s what a genius is like I’m glad you’re average” 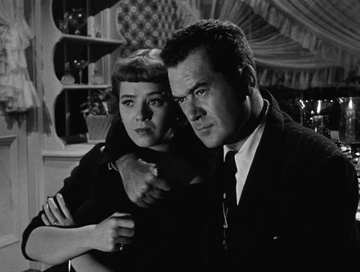 Dix gets a temporary break due to the testimony of his neighbor Laurel Grey (Gloria Grahame) who swears to Lochner that Mildred left Dix’s house alive and well. But even that is called into doubt when Dix and Laurel begin a torrid love affair that jumpstarts Dix’s creative juices. He works on the new screenplay with an energy he hasn’t had in years, fueled by Laurel’s affectionate help. Everybody sees a change in Dix but Laurel is seeing a side of Dix she doesn’t like. Dix has a paranoid streak a yard wide and no control on his temper at all. This is a guy who goes way past nuclear and into supernova when he gets his mad on. And Laurel comes to gradually realize that even if Dix didn’t kill that hat check girl, he may be totally capable of killing her if he lets his anger and paranoia have its way. 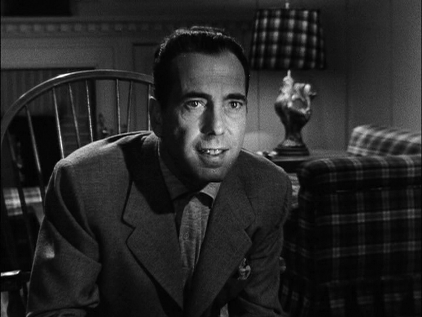 IN A LONELY PLACE is one of those movies that was considered campy melodrama when it was first released but now is regarded as a classic of film noir and I’m one of those who agree. It’s a fascinating movie about a talented man with flaws as large as his talent and the most interesting thing about the movie is how his friends deal with him, his talent and his flaws. Humphrey Bogart is a Film Icon due to his tough guy roles but he’s just as good if not better when he plays against type and his Dixon Steele is a guy who I actually believed was a writer. There were a lot of little touches that Bogart gave the character that I’m convinced he must have gotten from writers he knew because they rang true. Dixon Steele is a man who’s intelligent, charming, charismatic and frightfully insightful. But at the same time, he’s a man capable of sudden psychotic rages and near hysterical paranoid fits that terrify even those who love him best. It’s a totally wonderful performance from Bogart.

Gloria Grahame is just as wonderful as Bogart as she matches him line for line in that delightful Old School Hollywood Dialog that they just don’t write anymore. There’s something about her eyes and the way she looks that leads me to think she’s just as psychologically damaged as Dixon but she at least has an awareness of her flaws that Dix’s ego won’t allow him to acknowledge. 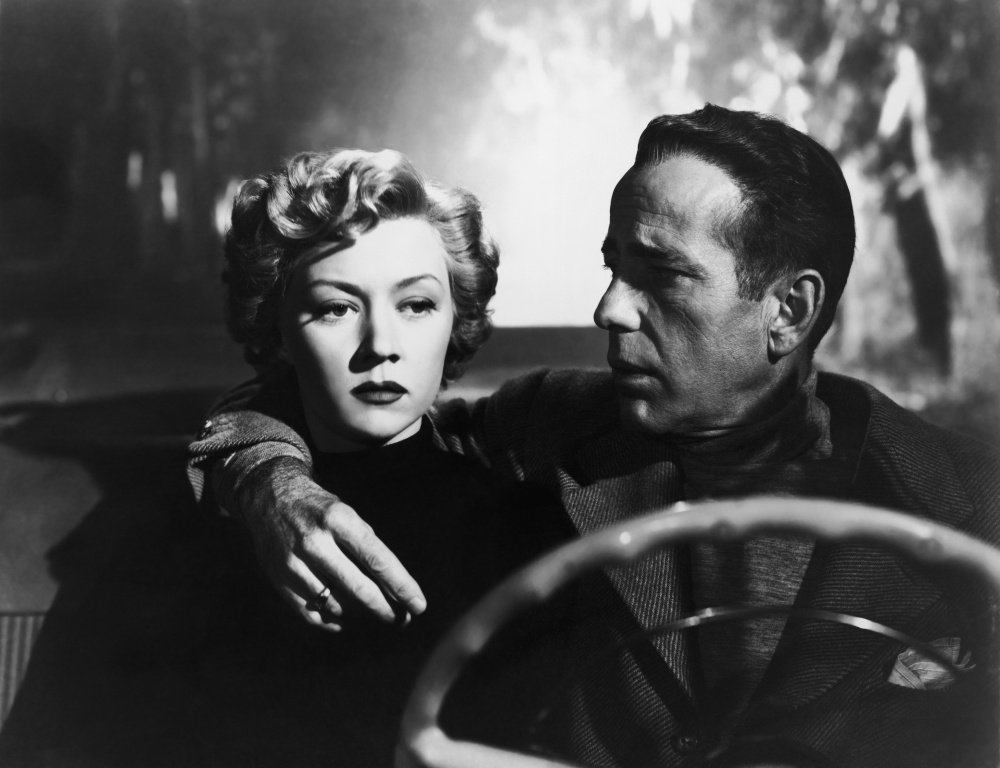 The direction by Nicholas Ray is wonderful and if you’re not familiar with him then IN A LONELY PLACE is a great place to start. Some of his other films include the deranged “Bigger Than Life” where James Mason goes totally apeshit thanks to his addiction to Cortisone and tries to murder his family. There’s the excellent noir detective film “On Dangerous Ground” where Robert Ryan plays a burned out homicide cop. He’s sent to a frozen wasteland north of a nameless crime ridden city to investigate the murder of a young girl and ends up falling in love with the blind sister of the chief suspect.

If you’re a fan of film noir, Humphrey Bogart or Nicholas Ray then you definitely should put IN A LONELY PLACE on your Christmas list of movies to buy and/or rent if you haven’t already seen it. It’s also a popular movie on Turner Classic Movies as they show it on a pretty regular basis. Watch and enjoy.

One thought on “In A Lonely Place”