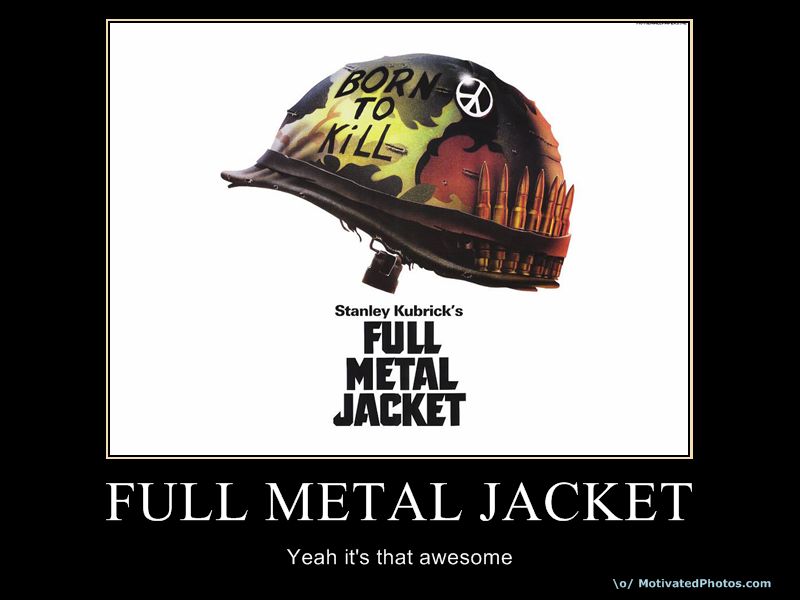 Based on the novel “The Short Timers”

Occasionally the subject of Vietnam war movies will come up when I’m having one of my well known heated discussions about movies with friends and family. Everybody will start slinging around their candidate for best Vietnam war movies and while everybody knows and loves “Platoon” “Apocalypse Now” and “The Deer Hunter”, you don’t hear many people today mention movies like “Hamburger Hill” (which has some excellent work by Dylan McDermott and Courtney B. Vance) or “Who’ll Stop The Rain” or even the movie that was billed as “the best war movie ever made” when it first opened in 1987, Stanley Kubrick’s FULL METAL JACKET

Now saying that FULL METAL JACKET is “the best war movie ever made” is really stretching a point as far as I’m concerned. It’s not even the best Vietnam War movie ever made. That honor most certainly has to go to Francis Ford Coppola’s “Apocalypse Now” And if you really want to be blown away, watch the Redux version. Yeah, it’s a whole hour longer and some may say that the French plantation sequence isn’t necessary but screw ’em, I enjoyed it anyway. And as far as pure story goes, “Platoon” and “Hamburger Hill” have FULL METAL JACKET beat. But you really should see it because Stanley Kubrick made it and it is a remarkable vision of The Vietnam War. In fact, if you’re in the mood for a Vietnam War movie marathon, rent all the movies I’ve mentioned so far and watch them in this order:

Trust me on this, it makes sense to watch them in this order because by watching the films that way you get a sense of how the madness of the war exponentially increased and how it infected the American consciousness thereby causing the collapse of the diehard values of the 50’s and 60’s held onto by The United States. It was painfully obvious that everything was changing day by day and nobody was really all that certain of what was going to happen tomorrow. But that’s enough of my half-assed social commentary. Onto the movie review….

FULL METAL JACKET begins with one of the most brilliant and profanely hilarious sequences in movie history as Gunnery Sergeant Hartman (R. Lee Ermey) addresses his raw recruits on Parris Island, which is where The Marine Corps trains their troops. R. Lee Ermey actually was a Marine Drill Instructor for thirty years and it was a stroke of genius on Kubrick’s part to have Ermey basically play himself since Ermey brings an outstanding level of realism to the role. And at the same time, he’s as funny as Richard Pryor on his best day. He seems to have a bottomless well of profane insults and obscene descriptions for his men that are at the same time outstandingly creative and yet mind-numbingly hilarious in their dehumanizing effect and he never repeats himself once as far as I could tell. One of the recruits actually has to pay a pretty stern price for laughing while Hartman is berating another recruit and I couldn’t blame the guy one bit ‘cause if I’d been standing there, I’d have been laughing my ass off. Ermey is simply wonderful in the role and he has a scene where he finds some contraband food in the footlocker of one of his recruits and the cat just simply loses his mind. The scene has even more power if you do your research and find out that R. Lee Ermey’s dialog is this movie was actual things he used to say to his real-life recruits. Suddenly it doesn’t become so funny. 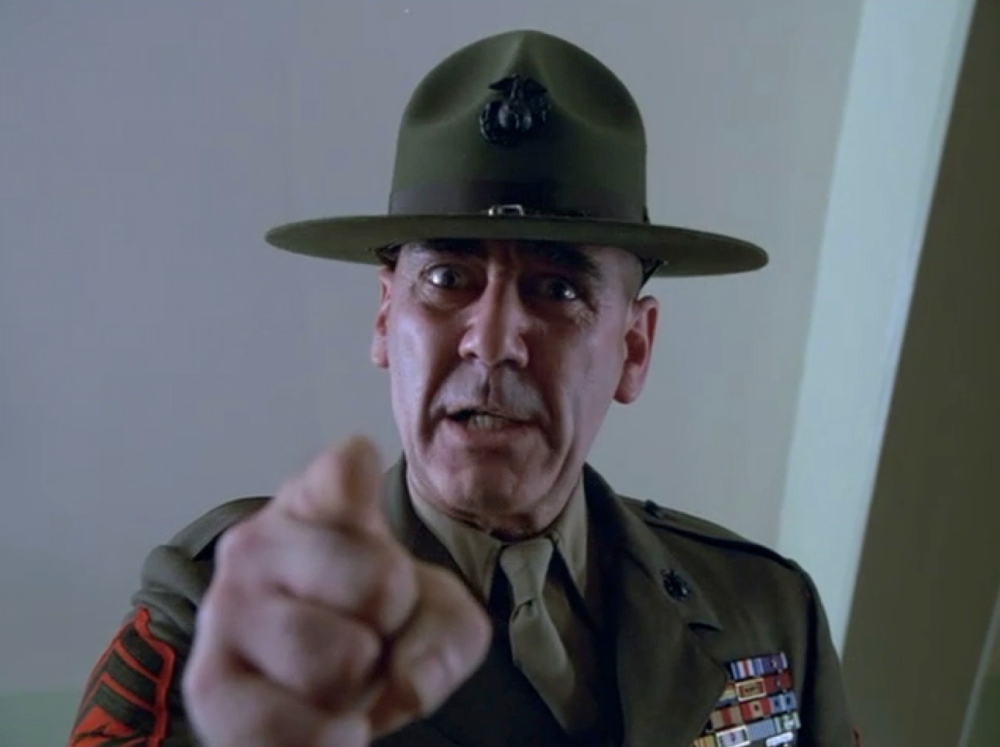 Hartman in particular latches onto one overweight recruit he names Gomer Pyle (Vincent D’Onofrio) since the poor slob can’t even tie his shoes right and heaps a whole bunch of abuse on the hapless bastard.  Hartman ruthlessly drives the recruit to the breaking point in his efforts to turn him into a soldier worthy to serve in Hartman’s beloved Marine Corps with horrifying and tragic results.  The conflict between Hartman and Gomer Pyle is witnessed by one Private Joker (Matthew Modine) who is there to become a journalist.

Joker confuses his superior officers because while he claims he is a killer and fully intends to be “the first kid on his block to get a confirmed kill” also blatantly wears a peace symbol on his helmet. Joker is the character we follow through the movie as he goes through basic training and eventually sees combat along with his buddy Rafterman (Kevyn Major Howard) who is a photographer but also is insanely hot to see his share of the action. Rafterman’s constant mantra to Joker is: “I wanna get in the shit.” The two men hook up with a platoon that is involved in The Tet Offensive and this leads to the last third of the movie where the platoon engages in a bloody confrontation with a sniper in the flaming ruins of Hue City. And by then, Rafterman, Joker and the platoon are most certainly all in a world of shit. 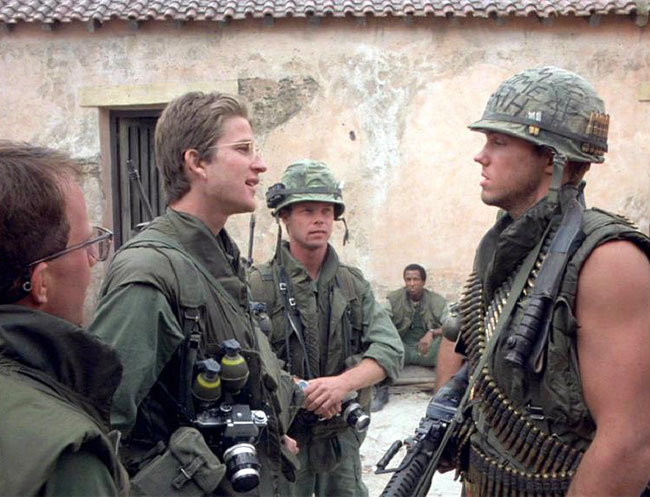 FULL METAL JACKET isn’t a movie with a straightforward plot or story and it feels very loose to me as a result. There’s no sense that we have a story that we’re following from beginning to end and in fact, some scenes don’t really end. They just fade out and go to the next one and maybe that’s what Kubrick was trying for in order to make us feel that The Vietnam War didn’t have a beginning or end. It just went from one outrageous horror to the next. And Kubrick isn’t known for being a director who concentrated on his actors anyway. Despite this, there are some great performances in the movie, especially from Ermey and Vincent D’Onofrio who plays Gomer Pyle. In fact, the first hour of the movie is so dominated by their performances that after we leave the Parris Island training sequence, the movie loses some of its energy since there’s no actor in the movie that comes close to the level D’Onofrio and Ermey achieve in the beginning. Although Adam Baldwin as a half-crazed M-60 machine gunner and Dorian Harewood as a member of the doomed patrol come awfully close as you can see that they’re acting their asses off. They’re both very good actors and their roles are solid pieces of characterization. I especially liked how even though Baldwin’s character shows blatantly open racist attitudes toward Harewood, he’s the first one to object when Harewood’s character is shot and the platoon leader orders that they leave Harewood behind.

But even flawed Stanley Kubrick is way better than most directors at the top of their game and FULL METAL JACKET is a five star package of entertainment on a lot of levels. The dialog is simply great and I love the look of the film. It’s simply amazing to me that Kubrick filmed this entire movie in England (Kubrick hated to fly and he insisted that he film his movies in England and he got what he wanted) The combat scenes in Hue City give the movie a very distinct look from other war movies that are usually filmed in the jungle since combat in a city is waged in a radically different manner from combat in the jungle.

So should you see FULL METAL JACKET If you’ve seen it already, you’re probably a rabid fan of the movie and don’t need any further convincing. But if you haven’t, by all means, rent the sucker and enjoy. As I’ve said, the first hour with Ermey and D’Onofrio is absolutely riveting and even though the rest of the movie doesn’t measure up to the beginning, it’s a classic war movie that I recommend highly.