Based on the novel “Falling Angel” by William Hjortsberg

Now here’s a movie that got into my head the very first time I saw it and squirmed around in there for a few days and made a nice little bloody nest where it stayed festering and feeding on my subconscious.  ANGEL HEART remains one of my personal favorites because it is photographed so well, the performances are all outstanding and it combines the private eye and supernatural genres flawlessly. It’s a hell of a movie and given the subject matter, I mean that quite literally.

Harry Angel (Mickey Rourke) is a private detective operating in 1955 New York. And he’s definitely not Sam Spade or Philip Marlowe. When we first see him he looks like he’s barely recovered from a three-day binge. He’s contacted by a lawyer named Winesap (“Law & Order” regular Dann Florek) who represents a strange foreign gentleman named Louis Cyphre who wants Harry to find out if a moderately famous 1940’s crooner named Johnny Favorite is still alive. When asked why, Cyphre simply states that Johnny Favorite owes him collateral for “certain services”. Harry thinks it stinks like a houseguest who won’t leave, but hey, Cyphre’s $5,000 check is good and Harry takes the case.

Turns out that Johnny Favorite was drafted into the army and returned home from the war with his handsome face all blown to raw hamburger.  After plastic surgery that changed his features completely, he simply upped and disappeared from the hospital. But after Harry does some checking and finds that the doctor who did the plastic surgery on Johnny Favorite falsified the records…well, he starts taking a genuine interest in this case. Maybe he’s at last gotten hold of that one big case every private eye dreams of solving.

He would have been better off sticking to his divorce cases. Very shortly, Harry is up to his unwashed neck in a mystery that he rapidly realizes may cost more than his life to solve. The trail of the singer Johnny Favorite is a blood-soaked one that leads from a really strange church in Harlem to the voodoo haunted bayous of New Orleans.  It soon occurs to Harry as he continues on his quest that the solution to the mystery may be more frightening than the mystery itself. But by that time his curiosity and suspicions about the origins and true identity of the elusive Johnny Favorite has possessed him to the point that he now absolutely has to know the truth, despite the fact that Johnny Favorite himself appears to be gruesomely killing every and any one who shows the least curiosity about finding him…

ANGEL HEART has so much to recommend it; I hardly know where to begin. The performances are absolutely first rate. Mickey Rourke may have given the best performance of his career in this movie and I think his “I know who I am!” scene near the end is one of his finest. Robert DeNiro is not only sinister but also quite humorous in his role. Look closely at him in this movie because there are not only visual clues to his true identity but he also looks quite a lot like Martin Scorsese did at the time this movie was being filmed (which I didn’t notice myself until reading Roger Ebert’s review of this movie) and given what we find out about Louis Cyphre, it may give you a chuckle.

If you recall anything about ANGEL HEART it’s probably because of two scenes Lisa Bonet has in this movie. The first is a voodoo ritual scene and the second is a sex scene with her and Mickey Rourke. I’m not going to spoil either of these scenes for you in describing them save to say that I admire Lisa Bonet for taking such acting risks in scenes that could not have been easy to shoot but they do indeed contribute to the story and are not added for shock. And what makes it even more amazing that Lisa Bonet filmed this movie while on hiatus from “The Cosby Show” where she was playing one of the sweetly wholesome Huxtable kids. I can imagine the discussions that took place on the “Cosby Show” set after ANGEL HEART hit the screens. 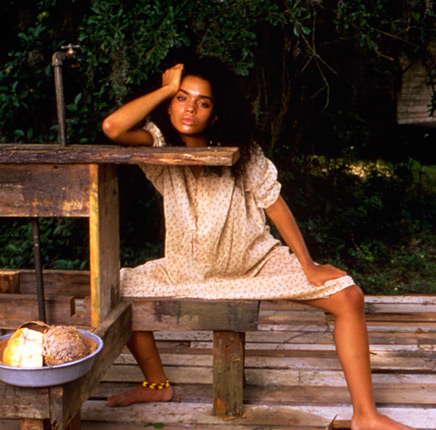 There is a lot in ANGEL HEART that is not for the faint of heart or the squeamish. Most people say ‘horror movie’ and they think of the “Friday The 13th” or “Texas Chainsaw Massacre.” When I say ‘horror movie’ I’m talking about a movie like ANGEL HEART or “Night Of The Hunter” where the story and characters are presented with an intelligence and internal logic that before you know it, halfway through the movie you’re totally sucked in and forget you’re watching a movie.

The bottom line is this: if you have seen ANGEL HEART then you’re probably nodding your head in agreement while you’re reading this. If you haven’t seen ANGEL HEART then I recommend that you do so at your earliest opportunity.  Get yourself the movie goodies of your choice. Put the Blu-Ray or DVD in your player and turn off the lights. And then prepare yourself for a really wonderful example of what I mean when I say ‘horror movie’.

113 min.
Rated R for graphic violence, adult language and graphic sex. The sex scene between Mickey Rourke and Lisa Bonet has become infamous for it’s startling imagery while the voodoo ritual scene may make those of more conservative religious beliefs and practices uncomfortable so don’t say I didn’t you. And folks, please put your kids to bed before you and your sweetheart watch this one, okay? Thank you and enjoy.