I don’t think anybody will be surprised when I say that Charles Bronson is one of my favorite actors of the group that I call “Old Time Tough”.  I’m talking about guys like Lee Marvin, Burt Lancaster, Ernest Borgnine, Jim Brown, James Coburn, Steve McQueen, Robert Mitchum, Woody Strode, William Holden, Clint Eastwood, Kirk Douglas, Sean Connery…you know what I’m talking about.  These are guys tough enough to walk through Hell with sticks of TNT in their hip pockets yet cool enough that the dynamite wouldn’t dare blow up on them.  Not like the current crop of pretty boy actors.  I’m sorry, but no matter how you try, you can’t convince me that half of today’s male movie actors can beat up on anybody over the age of nine, let alone the dozens of guys they take on in a movie.

Now Charles Bronson…here’s a guy who actually looks like he can pound the ever-lovin’ piss outta you in a New York minute.  He’s got a face that’s been lived in.  It shows age and experience.  He’s got a voice that sounds like he’s been gargling with whiskey and cigarette butts since puberty.  Charles Bronson radiates quiet menace.  He very rarely raises his voice on screen.  If he’s going to kick your sorry ass he just goes ahead and does it.  Chances are you’ve done something to deserve it.  And in MR. MAJESTYK the bad guys certainly do deserve it.  After all, Bronson goes through most of the movie just trying to mind his business.  But circumstances have other plans for him.

Vince Majestyk (Charles Bronson) is a Colorado watermelon farmer.  After struggling along for a few years he stands to make a massive profit from this year’s crop of melons.  He’s got 160 acres of melons that need picking and by a lucky chance meets with the feisty migrant worker Nancy Chavez (Linda Cristal) who isn’t related to that other Chavez but she has been involved in unionizing migrant workers.

Majestyk isn’t interested in her politics but if she can get a crew to pick his melons he’ll gladly pay them the fair wages she asks for.  However, Majestyk has to run off the small time strong-arm man Bobby Kopas (Paul Koslo) who is trying to force Majestyk to hire his crew of melon pickers that are nothing more than a bunch of Skid Row drunks.  The drunks don’t know how to pick melons and Majestyk knows they’ll ruin one melon for every three they pick.  So what does Majestyk do?  Well, since this is a Charles Bronson movie, he kicks Bobby’s ass and sends his crew packing.  You expected something different, maybe? 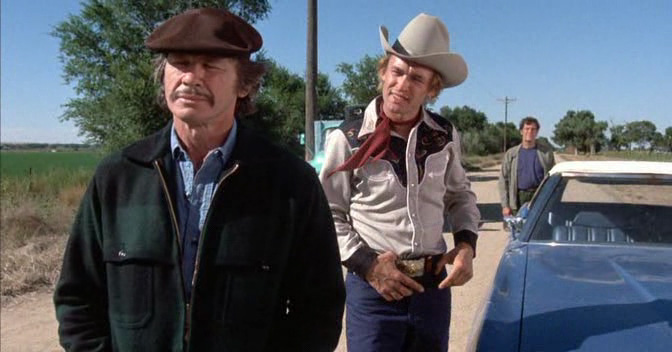 Bobby swears out an assault warrant against Majestyk who is promptly jailed by the sardonic Lt. McAllen (Frank Maxwell) who is immune to Majestyk’s pleas that he be allowed two or three days to get his melon crop in.  While in jail, Majestyk gets on the bad side of Mafia hit man Frank Renda (Al Lettieri) Renda’s boys try to break Renda out of jail during a wild shootout that goes horribly wrong and Majestyk sees a chance.  He makes off with Renda and tries to negotiate with Lt. McAllen: drop the charges against me and let me go back to picking melons and I’ll give you Renda.  However, with the help of his girlfriend Wiley (Lee Purcell) Renda escapes and vows vengeance against Majestyk.  After hooking up with Bobby Kopas, Renda scares off Majestyk’s migrant workers, breaks the legs of Majestyk’s best friend Larry (Alejandro Rey) and worst of all, machine guns Majestyk’s melon crop.

Well, he shouldn’t have done that.

You see, Majestyk is a decorated Vietnam veteran who earned a Silver Star and who was also one of the best U.S. Army Ranger instructors and he certainly hasn’t forgotten any of his skills.  He just hasn’t had a chance to use them for a while…

I’m a big fan of 70’s action movies like MR. MAJESTYK because while they lack the pyrotechnical whiz bang of action movies nowadays they have a gritty, down-to-earth look that gives such a realistic feel to the story that you really get sucked into what the story and characters are about and you’re not just waiting for the next big action sequence.  There’s really not anything in MR. MAJESTYK that is outside the realm of possibility.  I attribute that to the terrific screenplay by Elmore Leonard, who may just be the finest crime writer of the late 20th Century.  The dialog is wonderful to listen to but if you know anything about Elmore Leonard that shouldn’t be a surprise.  Leonard writes dialog where people talk to each other and not at each other.

The performances are great.  Charles Bronson is quietly capable as the enigmatic Vince Majestyk.  He’s just trying to get his melon crop in but all this other stuff keeps getting in the way.  Early on in the movie when he has a run in with some thugs and effortlessly takes away a shotgun from one of them, he says: “You’re in the wrong business” we believe him.  We also believe that Frank Renda doesn’t stand a chance against this man who he calls ‘The Melon Picker’ once we see what Majestyk is capable of when he finally gets sufficiently pissed off.  Al Lettieri obviously has a marvelous time playing Frank Renda.  His name might not be familiar to you but back in the 70’s if there was a crime/Mafia movie then Al Lettieri was in it.  His most famous roles were in the Sam Peckinpah version of “The Getaway” and he played Sollozzo, the only guy with the cojones to order a hit on Don Vito Corleone in “The Godfather” He was a guy who actually hung around and partied with Real Life criminals and mob guys.  It was that experience that he brought to the screen in the many roles he played, usually as a mob guy.

Linda Cristal is very good here as Nancy Chavez who eventually becomes Majestyk’s girlfriend.  They had a scene in a bar that is so refreshingly honest about how people actually decide to go to bed that I felt like cheering.  Sometimes it’s not all heart-shaped boxes of flowers and serenades under the balcony.  Sometimes people have a couple of drinks in a bar and say: “Hey, wouldn’t it be a good idea if we…”  And I can’t close out this review without mentioning Mr. Majestyk’s yellow Ford pickup truck that does such remarkable stunts in the final chase scene that it should be a member of The Stuntmen’s Association of Motion Pictures.

So should you see MR. MAJESTYK?  Totally.  If you’re a fan of Charles Bronson, of Elmore Leonard, of tight well-plotted, well-written crime thrillers then this is a movie that you’re going to love.  And in terms of acting, you won’t be disappointed.  MR. MAJESTYK is one of Charles Bronson’s best movies and one well worth seeing.  You’ll like it.  Trust me.

One thought on “Mr. Majestyk”